Warning: This story contains a graphic photo and details that some readers may find disturbing.

The founder of an animal rescue center said she is suffering "sleepless hours" after dealing with the tragic case of a dog horrifically injured and left to die in a ditch.

Stephanie Fields, director of Homeward Bound Canine Rescue and Rehabilitation in Kentucky, got a phone call Tuesday morning from a woman who found a dog barely clinging to life along a highway in Laurel County. What Fields saw when she got there still haunts her, she said.

"To be blunt, his arms, his front paws, were almost completely amputated. We knew if we moved him in a certain direction, his legs would fall off," Fields told The Huffington Post.

The purebred boxer was a mangled mess. Fields found a rope tied around the dog's collar, and a veterinarian who assessed the dog concluded it had been dragged along the road.

The dog's "only movement was he kept attempting to get underneath a blanket," Fields said. "It was so sad because of his arms being almost ripped from his body, he could only shimmy against his chest."

Among his many other injuries, the boxer's tongue was severed, his eye ripped from his socket, and his shoulder bones exposed.

"The actual bone itself had been sheared down from dragging on the black tar," she said. "The bones were smooth."

There was simply no other choice but to euthanize the animal, Fields said.

Fields contacted the Laurel County Police Department and the American Humane Society, which offered $5,000 for information leading to an arrest in the case. To her surprise, it took less than a day for a woman to call Homeward Bound claiming the dog was hers and asking to retrieve its body.

The woman, Janice Madden, told the rescue shelter that her 9-year-old son had tied the boxer to the back of the family's truck the previous night, according to Fields. The next morning, Madden's husband, Claude, drove to work without realizing the dog, still attached, was desperately trying to keep up with the moving vehicle, Fields said.

"After realizing he stopped, pushed the dog in the ditch and proceeded to go to work, planning to return to the ditch after work to retrieve the dog," Fields said. "That’s what [Madden] informed me of."

Madden was upset that the shelter had euthanized the dog instead of returning the suffering pup to his owners, Fields said.

Homeward Bound workers examined the truck's path Tuesday night. They determined that the dog had run along with the truck for the first mile and a half of its route before succumbing to exhaustion, Fields said. For the last four miles of the route, every foot of the road showed the bloody impact where the dog had bounced before finally being left in a ditch, she said.

"I was saddened at the vet's office after we put the dog down, I was sad of the suffering it had to go through, but when I actually physically walked that roadway and saw where that animal bounced, I became very angry," she said.

Madden told HuffPost the family was "very tore up" and "beyond words." When asked why her husband left the dog in the ditch, she ended the interview.

The Laurel County Police Department said it plans to present evidence -- including an eyewitness who said they stopped the truck while it was dragging the dog -- to a grand jury the second week of May. The jury will decide whether or not to press charges. The police declined to provide further details on the case, citing the open investigation.

"Accident or no accident, it was a conscious decision to leave that animal in a ditch and go on with your everyday life, and someone should be held accountable for that." 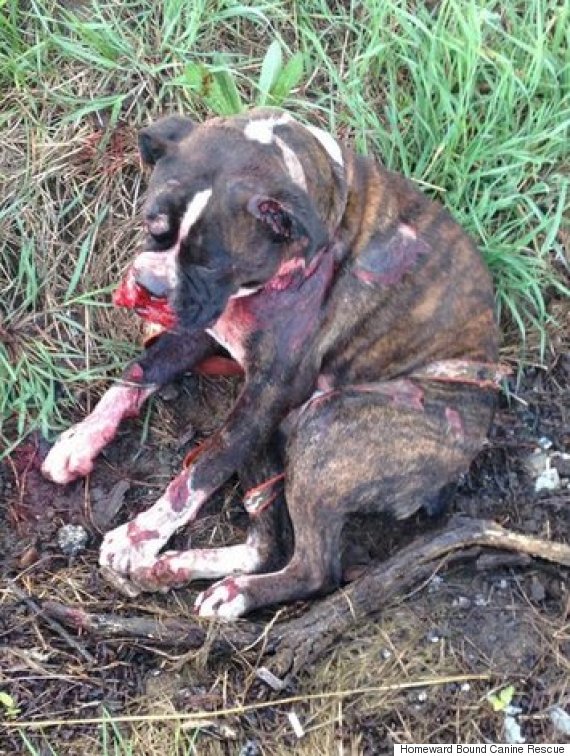