And when all the way up in New York City, Stacey Silverstein and Jackie O'Sullivan saw footage of Sheba at a high-kill shelter in the South, they just had to save her life.

"Our passion and mission is to focus on cruelty, neglect and abuse cases," says Silverstein, who with O'Sullivan founded a group called Rescue Dogs Rock. "We are focused on taking the dogs with severe medical issues as well who would be euthanized instantly because they are sick."

Every day in the world of rescue we see images that are very hard to look at. It's extremely difficult to see an animal suffering & not feel compelled to do something to help.We got a plea to help Sheba on Friday & have been working tirelessly to get her out of the shelter. The minute we saw this, of course, we knew we had to help her!!We do not know her past or how long she has been like this, but we do know we will do everything in our power to help her!We hope you will all join us on Sheba's journey. She's only a year old with her entire life ahead of her.To join us in helping Sheba, we could really use donations! www.rescuedogsrocknyc.org/donate/ to give!! Thank you!

"The minute we saw the video of Sheba from the shelter, we knew we had to help her," says O'Sullivan.

Sheba is a little under a year old, and was brought to the shelter in March. She could only walk on her elbows, and it wasn't clear at the time if her front legs were bent due to abuse, or from some other problem.

Volunteers got the pup to New York, where she's been examined by vets who determined her problem is congenital. Sheba was born this way, in other words, and will need special-made splints.

Once she gets her splints, she'll move from the vet's office into a foster home while she learns how to walk on her paws. 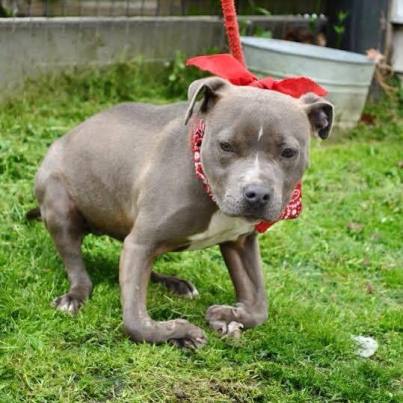 After that, this spunky little sweetheart -- whom Silverstein describes as a "10" in the personality department -- will be made available for adoption.

"All you have to give them is just a chance," says Silverstein. "They really flourish."

"We are thrilled she wasn't abused, but still heartbroken for her," says O'Sullivan. "Lucky for Sheba, she has no idea anything is wrong with her."

Sheba is free!!! She has been sprung & is starting her journey!!!www.rescuedogsrocknyc.org/donate/ to help w her medical costs!

Rescue Dogs Rock is a new organization; they've only been around for a month, and are waiting for the IRS to grant their application for 501(c)(3) status. The group's founders are all experienced animal rescuers, and so far, they've helped about 60 dogs. Check out those dogs' stories and photos on the Rescue Dogs Rock Facebook page.