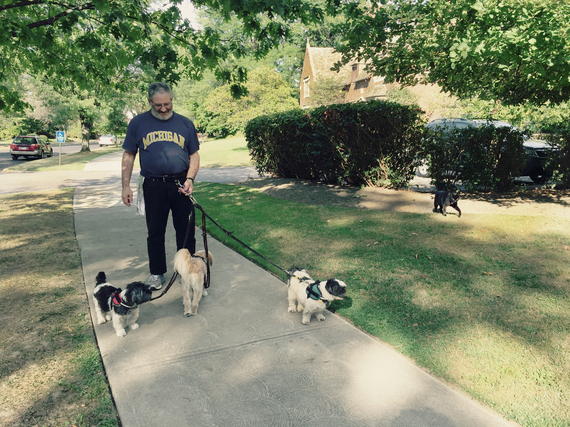 When she came through the swinging door, I gasped. Oozing sores, tufts of matted fur and raw patches of angry red skin--repulsive, hideous. I thought I might throw up. She scampered to Seth, who bent to her gently, cradling her carefully. Part shih-tzu, part who knows what, she was three months old and very ill. The Animal Protection League had asked my husband, Seth, if we, having recently lost our beloved Thisbe to a brain tumor, would foster this puppy. Seth saw past the mange to the joyous, loyal bundle she would become, a wriggling black and white glossy-coated, plumy-tailed girl. Baths and ointment and Seth's love healed her.

When he went back to the shelter to formally adopt her, now named Ascelpia for the Greek God of Healing, he arrived home with Diva, another mange-ridden black and white shih-tzu mix with a darling under-bite, who had been on the list to be euthanized because she attacked the feet of men wearing leather shoes. Perhaps she had been kicked? Seth, with blunt- edged nail scissors, sat on the sofa, soothing Diva and cutting away her mats, one tuft at a time. Again, patience and skill healed the mange, calmed the temper. She seemed to feel safer when she could carry a soft toy in her mouth--everywhere. Then, three months later, one April afternoon, Seth and my 9-year old son arrived home with a tiny caramel fuzz ball. "The shelter called me. She was found on the streets of Cleveland. She's only six weeks old. We're just fostering her," he explained, not sheepishly enough, in my opinion. Yeah, right, that my family would ever relinquish a puppy. And so, Maisie, too, came to join our menagerie.

Soft-touch Seth, whose midlife crisis of adopting little mutts beat racing fast cars or chasing women. My husband, to whom I had been married for almost 30 years, was a dog whisperer. I was amazed; I knew he was good with animals, but this was taking things to a whole new level.

Our cats, grey Sebastian and black Cesario, were unimpressed by additional family members in the form of three small dogs. Eventually. Sebastian tolerated the girls, enraging them when he slept in their bed, but Cesario remains frightened, unwilling to enter the kitchen when they are there, even to get to his food bowl. He will condescend to be lifted over the fray. I want to say to him, "Ignore them and they'll get tired of fussing at you," the way my own mother counseled me to ignore my brother's ribbing. He is a brave mouse killer, but a wimp with his dog sisters, especially Maisie, who seems to relish tormenting him. Seth says Maisie just wants to play. Cesario isn't having it. Both cats spend time with other families in our neighborhood, a stay-cation from their tiresome dogs.

Several times a day, Seth fastens the girls to his belt via a complicated arrangement of leashes and harnesses and walks the circle on which we live. The cats follow at a respectful distance. Cars slow in fascination. Other passerby remark, "Do you know you have two cats following you?"

Diva marks; the other two follow. Maisie strains at her leash at every squirrel. Sclepi lags behind. Unconcerned, Seth reads his I-phone, trying not to get tangled in their leashes and remembering, mostly, to hold Diva close in case of unfamiliar leather shoes. Diva is the alpha dog, needing always to be closest to Seth, her sad eyes following him around a room. Maisie is the prankster, recently vaulting over our front gate. Sclepi, first, is the most mellow, happy to have her tummy rubbed.

When we returned home for an RV trip to California and discovered Thisbe, our eleven-year old dog, disoriented, walking in circles, I knew she was desperately sick. Putting her down made all of us sad, but Seth felt saddest; she, too, had been his dog even though she, born under a recliner, had come to us to be our daughters' puppy. We thought we wouldn't have a dog for a while--Less to tie us down on weekends, one less creature to care for. But, after a few weeks, we missed the click of toenails on kitchen floor, racing to greet us. The house was too empty--three children and two cats were insufficient. Our younger daughter had lost a close friend in an accident some months earlier. She said, "I'm too sad to love something else that might die," but Seth knew better. In our family, there's a mantra that Seth can fix anything: broken china, faulty wiring, computers that don't behave and now, small sick abandoned dogs. He understood that when we care for creatures, heal and love them, we help to heal our own broken bits.

The girls--our dog girls, not our daughters also known as the girls--know we are theirs, trust our intentions, believe Seth hung the moon. Sometimes, as I note their adoration of my husband, I remember the way the circle of his love enveloped me a long time ago when we were young and dog-less. Lucky girls. Lucky children. Lucky me.