Let's get this straight. We spent the first several years of Barack Obama's presidency obsessing about whether he was born in Kenya. Why? Because a large segment of the GOP electorate -- spurred on by Donald Trump -- splenetically asserted that Obama's supposed foreign birth barred him from the White House. Merely to quell the rising political distemper, Obama was forced to release a long form birth certificate from Hawaii.

With me so far? OK. Now Trump is raising the birther issue again, but this time the target is Ted Cruz. Ever selfless, Trump disclaims any worry that Cruz is polling ahead of him in Iowa. His sole concern is for his beloved, if recently adopted, Republican Party:

"Republicans are going have to ask themselves the question: 'Do we want a candidate who could be tied up in court for two years?' That'd be a big problem... for Republicans because he'd be running and the courts may take a long time to make a decision. You don't want to be running and have this kind of thing over your head."

Reliably Pavlovian when it comes to Trump, the media took his bait and ran with it. If foreign birth is disqualifying, this time Trump has his opponent dead to rights: beyond dispute, Ted Cruz was born in Canada. The senator's only defense -- that his mother was an American citizen -- also applies to Obama. So if the constitutional requirement that the president be a "natural born citizen" mandates birth in the United States, Cruz can never be president.

So why isn't the Cruz campaign sweating bullets and leaking oil? Where are all those constitutional purists in the Republican base who believe falsely about Obama what is true about Cruz? Whatever, pray tell, could the distinction be?

Oh no. It couldn't possibly involve...

Actually, it's worth stringing this out a little. So let's reprise the toils imposed by the birthers -- and some elements of the elected GOP -- on America's 44th president.

The issue of whether Obama's alleged birth in Kenya disqualified him to be president surfaced during the 2008 campaign. It was not in dispute that his mother, like Cruz's, was an American citizen. Though there is no definitive Supreme Court ruling on the issue, the great weight of scholarly opinion was that, regardless of birthplace, his mother's citizenship made Obama a "natural born citizen" eligible to be president.This also applied to Obama's opponent John McCain, born in Panama to an American military family. Still, to put this issue to rest, before the election Obama released his official Hawaiian birth certificate.

It didn't help. A fresh round of accusations labeled the Hawaiian birth certificate a forgery. An actual forgery surfaced -- a fake Kenyan birth certificate. Pondering a run in 2012, Donald Trump continued using his media megaphone to question Obama's eligibility for office. The birther movement went viral through the internet, talk radio and other channels of the conservative media, its fever infesting Republican meetings and town halls.

To say the least, not all Republican officeholders distinguished themselves in response. Senator Richard Shelby said, "I haven't seen a birth certificate. You have to be born in America to be president" -- a disqualifier he has not seen fit to repeat about Ted Cruz. In some way or another birtherism was stoked by such luminaries as Senator Roy Blunt, Sarah Palin, Newt Gingrich, Mike Huckabee, Michele Bachmann and numerous other Republican Congressmen and candidates -- some of of whom implied that the president had a sensibility and viewpoint -- indeed, loyalties --derived not from America, but Africa.

Lest we forget the undertone of denigration which was birtherism's companion , the remarks of Gingrich and Huckabee were particularly gamy and insinuating -- and, when deployed against our own president, strikingly xenophobic. Gingrich stated that Obama's sensibility could only be grasped by those who "understand Kenyan, anti-colonial behavior." Falsely claiming that the president had been raised in Kenya, Huckabee asserted that Obama "probably grew up hearing that the British were a bunch of imperialists who persecuted his grandfather." Their barely concealed implication was that America's president was, in fact, "the other" -- a stranger to America and its values.

To be sure, other Republicans behaved with decency. Some were punished for it by birther-inflamed GOP voters. Confronted by birthers at a town hall in Delaware, Representative Mike Castle firmly rejected their claims -- he was roundly booed, and lost a Senate primary to a Tea Party candidate who dabbled in witchcraft. Fearful of such consequences, other GOP officeholders simply avoided public meetings.

Others ducked the issue by disclaiming knowledge of Obama's birthplace. Still others couched their evasions as respect for the electorate, as did John Boehner in asserting his disinclination to tell voters what to think -- a curious objection from a man who attained high office by doing just that. All in all, much of the official GOP allowed the issue to keep boiling among the base, profiting from the unreasoning antipathy to Obama it engendered. 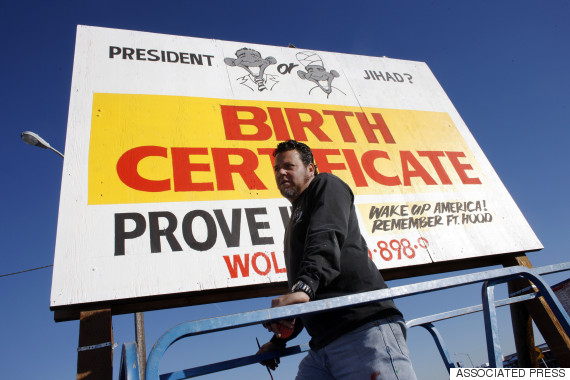 The impact on the electorate was measurable, and distributed in telling ways. An opinion poll carried out for the Daily Kos in 2009 found that 28 percent of Republicans believed that Obama was not born in the U.S., and that an additional 30 percent were not sure. Notably, support for birtherism was concentrated among whites, and was particularly strong in the South

But the virus persisted nationwide. In 2011, a Gallup poll reported that 23 percent of self-identified Republicans thought that Obama was "probably born in another country," as opposed to 14 percent of independents and 5 percent of Democrats. The 2011 release of Obama's long-form birth certificate did little to extinguish this pervasive falsehood. In September, 2015 a CNN/ORC poll showed that 20 percent of Americans continue to believe that Obama is foreign-born.

Again, it is well to recall the singular vituperation directed at the president which has accompanied birtherism -- including a shout of "liar" from a Republican congressman during his State Of The Union Address. It is hard to perceive such invective as wholly coincidental, a mere byproduct of partisan disagreement. For the inescapable essence of birtherism is that Obama is not merely wrong on the issues, but an illegitimate president, a stranger who, by virtue of his origins, is uniquely undeserving of the decent respect otherwise due his office.

Now let us contemplate the current treatment of that would-be president and child of Canada, Ted Cruz.

For once, one of Donald Trump's witches shafts seems to be missing its mark. In the week since Trump first hurled it -- a lifetime in this viral age -- there is little sign that the question of birthplace which so bedeviled Barack Obama is seriously tarnishing the foreign-born Cruz with Republican primary voters. In 2016, it seems, the contagion of birtherism is confined to the media, spurred on not by the GOP base, but by Cruz's competitors and their allies -- whose obvious self-interest is augmented by a uniform loathing of the Texas senator.

Seemingly frustrated at the initial paucity of grassroots response, Trump has escalated his attacks, aware that taking down Cruz in Iowa could gravely damage his chances. On Sunday's Meet The Press, Trump direly predicted: "If Ted is the nominee, he will be sued by the Democrats." "Ted is very glib, " he complained in Iowa, "and he goes out and says 'well, I'm a natural born citizen', but the point is you're not." Professing bewilderment that he is trailing Cruz in most Iowa polls, Trump said of his rival, " You can't have that problem and go be the nominee."

But, apparently, Cruz can. Brushing off Trump's claims, he ascribed them to the political "silly season." His campaign for the presidency rolls on; his stock as Trump's leading Republican challenger is holding steady. Untroubled by birthers, Cruz finished a six-day cruise of Iowa town halls, buoyed by the very Republican base which so despises Obama. What Trump's political inner ear fails to pick up is the sound of silence, the absence of the dog whistle which once animated birthers. Instead what he may be hearing is the sound of Cruz's footsteps.

For among the birthers, indifference reigns. This time the issue is not visceral, as it was with with Obama, bestirring the deep emotions which gave us years of birtherism. Conservative talk radio host Hugh Hewitt dismisses the question of Cruz's eligibility as a non-issue for the Republican base. Cruz's principal Iowa backer, fiercely anti-immigrant Representative Steve King, neatly exemplifies their curious selectivity. With respect to the president, King embraced the birther movement and questioned Obama's birth certificate. As to Cruz, King insists that his scholarly research proves that there is "no doubt" Cruz is a "natural born citizen"eligible to be president. Foreign birth, it seems, is less foreign in Canada than Kenya.

One reason for such disparity is surely garden-variety hypocrisy. Barack Obama is a progressive Democrat. Ted Cruz is a hard-right conservative with an enthusiastic following, no doubt including many erstwhile birthers who now find constitutional consistency ideologically inconvenient. But there is another distinction, peculiar to Obama, which Republicans need to own: the distinction which helped spread the infection of birtherism among the GOP base, the reason that almost half of Republican primary voters persist in believing that Barack Obama is another version of their "other" -- a Muslim.

President Obama is black. Senator Cruz is not.