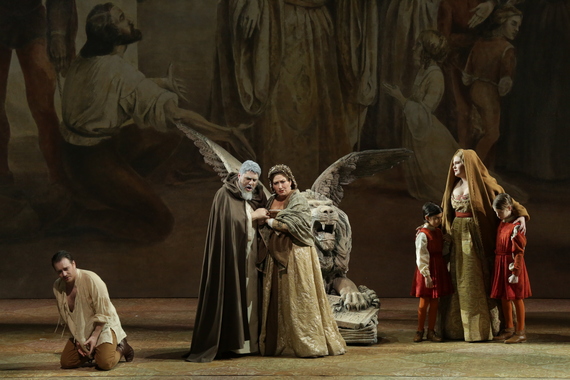 It is far from unheard of for a specific singer to champion a forgotten piece and bring it back into the performance circuit. Maria Callas, for example, brought Anna Bolena into the 20th century. In recent times, Joyce DiDonato has given particular prominence to Rossini's La Donna Del Lago and Placido Domingo, the raison d'être for a well-executed and stirring revival recently seen at Milan's Teatro Alla Scala, has resurrected Giuseppe Verdi's musically-and-dramatically fulfilling I Due Foscari from semi-obscurity to reveal an exciting opera with ample potential for singers and stagings.

Foscari, premiered in 1844, is early-Verdi at its finest. It shows his developing characters, seeing what it takes to build an effective scene or aria, and even successfully experimenting with musical techniques outside his usual realm or composition (leitmotivs for individual characters, unsubtle but effective, abound in Foscari). The libretto, by Verdi's oft-collaborator Francesco Maria Piave, was taken from Lord Byron's theatrically-weak 1821 play which was, in turn, loosely based on the story of the downfall of Venetian Doge Francesco Foscari. In 1457 Venice, Jacopo Foscari, son of the Doge, is being tried for the murder. When the Council of Ten convicts him and sentences him to exile, his wife, Lucrezia Contarini, implores the Doge for help. Thus is born a conflict of family vs. duty and justice that Verdi would expand upon in his later works like Simon Boccanegra and Don Carlo.

While the first half of the run of performances of this new production was headed by Placido Domingo as the Doge, the final four performances, one of which I took in, were headed by Italian baritone Luca Salsi as the aged Doge. Salsi, 41, easily morphed into the elderly Doge Francesco Foscari without equivocation, but his fiery singing made his performance anything but tired. His elegant, healthy voice dispatched a well-sung "O vecchio cuor che batti" and his interpretation steadily grew in intensity throughout the evening, capping off in an exquisite and deeply affecting "Questa dunque è l'iniqua mercede," no doubt a predecessor to "Cortigiani vil razza" from Rigoletto. When Salsi collapsed, dead, into his bed at the end of this opera, it was clear that this is a powerful Verdi baritone in the making.

The "other" Foscari, the Doge's son Jacopo, was capably sung by Francesco Meli. Meli's voice may not be particularly distinctive, but it does have that "Golden Age" resonance to it and he is particularly idiomatic with Piave's text. The on-pitch but less-than-effortless high notes in "Dal Piu Remoto Esilo" were more than made up for by spinning pianissimi. Like his tone quality, his physical presence also exuded that "Golden Age" aesthetic of charisma despite dramatic disinterest. 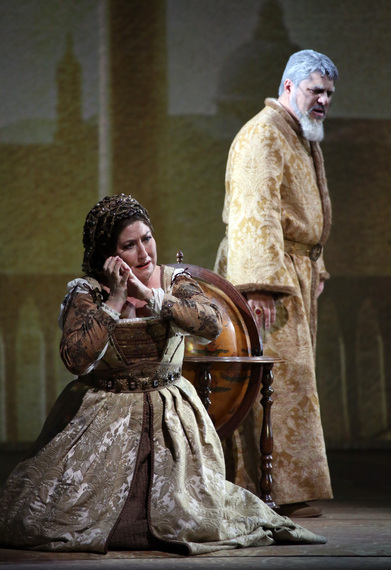 It has been said that it wasn't until Verdi was truly entrenched with Giuseppina Strepponi, his second wife and the creator of the role of Abigaille in Nabucco, that he really mastered writing for the female voice. As a result, the part of Lucrezia Contarini is relentlessly high-lying and the music seems uninspired compared with what the other characters are working with. Still, Italian soprano Anna Pirozzi (who, according to her professional Facebook page, sang Verdi's Lady Macbeth just two nights prior) brought scrupulously detailed singing and a huge, exciting, flexible voice to her Scala-debut role. Pirozzi's glinting, bronze-colored voice seems unique. Her upper register, where most of Lucrezia's music lies, has a hyper-focused, vaguely-strident edge, but she wields it with extreme control. Her smartly-phrased "Tu al cui sguardo onnipossente" showed off deftly-floated high notes, sweet, pretty low notes, a golden middle register, and even a trill. Dramatically, she was fully invested in a part that had her alternately supplicating and sobbing.

It's never quite clear why Jacopo Loredano is the villain in this opera, but Andrea Concetti's performance of the role was as distinguished as the rest of the performers' and his sense of legato was a pleasure to hear.

The smaller roles were all filled in well, though Edoardo Milletti's Barbarigo was sometimes overpowered by the orchestra.

If only every opera were given the revelatory reading that conductor Michele Mariotti gave to I Due Foscari. His affection for the material was clear as his controlled hand kept the action moving relentlessly towards the conclusion. His tempi never lagged and he drew numerous details from the Teatro Alla Scala Orchestra which responded with distinction. Mariotti is a conductor that makes it possible for the audience to hear the whole score with all its nuances. No detail is skimped on. He did it with La Donna del Lago in New York, and it happened again here. Verdi's orchestral leitmotivs were clearly emphasized and he maintained a musical tension throughout the performance that kept the drama surging forward. The Teatro Alla Scala Chorus performed well as the people of the court 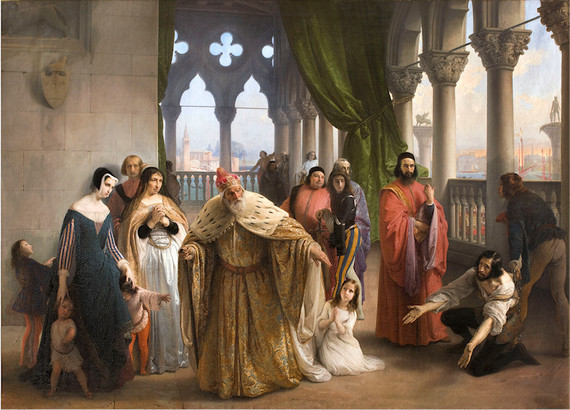 Alvis Hermanis's new production was more-or-less inoffensive. Hermanis was able to effectively communicate the gulf between duty and family and he has a penchant for tableaux that mimic the Francesco Hayez paintings of the actual historical incident. The only truly baffling element was the dancers that served as the Council of Ten, the governing body that convicts Jacopo Foscari. They were present in many scenes and their masked antics didn't do anything to serve the action. However, Alla Sigalova's choreography for the gondoliers (the same dancers from the Teatro Alla Scala School of Dance as those who played the Council of Ten) was inventive and truly called to mind boats on the water. The set was made up of parchment-colored screens that flew in and out and served as surfaces for projections as well as some larger set pieces (and way too many lions). Ineta Sipunova's projections were handsome and evocative and Kristīne Jurjāne's costumes were understated but effective. Gleb Flishtinsky's monochrome lighting gave the projections the chance to shine.

This production of I Due Foscari, obviously well-rehearsed, makes a strong case for an interesting opera that is a useful benchmark when considering Verdi's career as a whole.

While the run of I Due Foscari may have concluded, the Scala will present Verdi's Simon Boccanegra in July as part of its admirably-diverse season that includes works from Umberto Giordano's seldom-heard La Cena Delle Beffe to Benjamin Britten's The Turn of the Screw to George Gershwin's Porgy and Bess. Many productions from Teatro Alla Scala are filmed and later shown on ARTE TV, depending on the region of the viewer. If the quality of these productions is anything like I Due Foscari, which it probably is, then make it a priority to tune in.