You may snicker when you see dog owners talk to their pets as though they were human or view YouTube videos of dogs supposedly speaking English back to their owners, saying words like “banana” and “I love you.” And with good reason: although dogs have the capacity to understand more than 100 words, studies have demonstrated Fido can’t really speak human languages or comprehend them with the same complexity that we do. Yet researchers have now discovered that dog and human brains process the vocalizations and emotions of others more similarly than previously thought. The findings suggest that although dogs cannot discuss relativity theory with us, they do seem to be wired in a way that helps them to grasp what we feel by attending to the sounds we make.

To compare active human and dog brains, postdoctoral researcher Attila Andics and his team from MTA-ELTE Comparative Ethology Research Group in Hungary trained 11 dogs to lie still in an fMRI brain scanner for several six minute intervals so that the researchers could perform the same experiment on both human and canine participants. Both groups listened to almost two hundred dog and human sounds—from whining and crying to laughter and playful barking—while the team scanned their brain activity.

The resulting study, published in Current Biology today, reveals both that dog brains have voice-sensitive regions and that these neurological areas resemble those of humans. 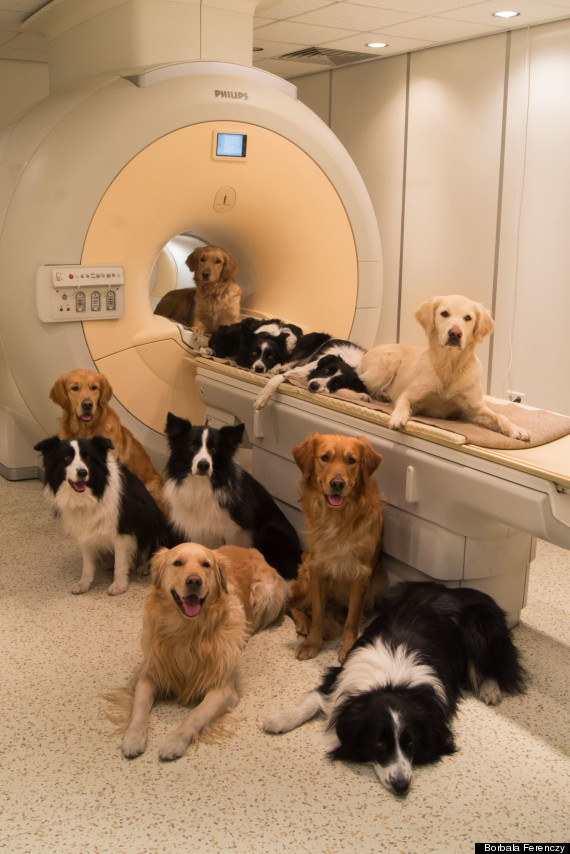 These are dogs at the MR Research Centre (Budapest).

Sharing similar locations in both species, they process voices and emotions of other individuals similarly. Both groups respond with greater neural activity when they listen to voices reflecting positive emotions such as laughing than to negative sounds that include crying or whining. Dogs and people, however, respond more strongly to the sounds made by their own species. “Dogs and humans meet in a very similar social environment but we didn’t know before just how similar the brain mechanisms are to process this social information,” Andics says.

These striking similarities help clarify the timeline and stages of mammalian evolutionary history. Until now researchers had identified voice-sensitive brain regions only in humans and macaque monkeys, whose last common ancestor lived 30 million years ago. The last common ancestor of humans and dogs—a mammalian carnivore with a brain the size of an egg—existed around 100 million years ago. The canine finding thus suggests that the voice-sensitive brain regions in both species evolved at least that long ago, if not earlier. Other mammals on the same evolutionary branch as humans and hounds that also arose from that last mutual ancestor are likely share the same brain areas as well.

But dog owners might be most interested in what this study says about our special relationship with canine pets. Humans domesticated dogs somewhere between 18,000 and 32,000 years ago, and since then they have become people’s best friends, hunting partners, guards and even purse accessories. Andics thinks the parallel brain sensitivity to voices and emotions may account in part for our unique bond. “This similarity helps explain what makes vocal communication between dogs and humans so successful,” he says. “It’s why dogs can tune into their owners’ feelings so well.”

Turns out, people who talk to their poodles or golden retrievers aren’t so silly after all.