WASHINGTON -- Nothing brings everyone together quite like puppies and kittens.

This goes for lawmakers, too. Thursday's "Paws for Love" adoption event on Capitol Hill was a bipartisan affair. The Valentine's Day event hosts, Reps. Jim Moran (D-Va.) and John Campbell (R-Calif.), along with Rep. Mike Quigley (D-Ill.), were among the many who gathered to pet cats and dogs from 10 D.C.-area animal shelters.

"There are about seven million animals that are brought to shelters throughout the year, and about half of them have to be euthanized. It's a shame," said Moran, who, together with Campbell, co-chairs the Congressional Animal Protection Caucus. But Moran added, "three and half million or so" are adopted from animal shelters each year.

The goal of the event, organized by the American Society for the Prevention of Cruelty to Animals and the Congressional Animal Protection Caucus, was both to raise awareness about animals in shelters throughout the country and to find a home for some of those animals. A similar event last year was reportedly a big hit.

"It was during appropriations season, and things were really, really tough," said Nancy Perry, the ASPCA's senior vice president of government relations, recalling the 2012 event. But the event brought together "staff from both sides of the aisle" and helped ease the stress for those who attended, she said.

Most important, some 11 pets at the event were adopted into loving homes.

So it only made sense to Perry to throw the next Capitol Hill gathering on a day reserved for Cupid's arrow. "What better day to hold this event than on Valentine's Day because it really is about love," she said.

Moran seemed confident that many of the animals there would be adopted -- some by his own staff. "We have a dog-friendly office," he said. "I know a few staffers will walk away with a new pet."

Campbell pushed pets as the antidote to partisan bickering. Recounting President Harry Truman's famous joke, which was also written on the event invitations, Campbell quipped, "If you want to find a friend in Washington, get a dog."

While most in the room were occupied oohing and cooing over the animals, some of the legislators present wanted to talk about laws to protect those friendly felines and canines.

The ASPCA had laid out leaflets asking for support for the proposed Animal Fighting Spectator Prohibition Act, introduced in the House by Reps. Tom Marino (R-Pa.), Jim McGovern (D-Mass.), Campbell and Moran. The bill would make it a federal offense to knowingly attend an organized animal fight.

Still, the main focus in the room stayed on the cats and dogs.

Pets from the Homeward Trails shelter based in Arlington, Va., wore outfits from Tuesday's Mardi Gras parade, including Abe, an 8-year-old dog in a colorful outfit topped by a silver hat, and Mattie, a 3- or 4-year-old foxhound in a tiger-themed costume.

While there were far more dogs than cats, felines drew their share of admiration. Thelma and Louise, 6-month-old siblings from the Baltimore Animal Rescue and Care Shelter, played around in their crate, amused by each other and the cooing people.

At the end, Quigley implored everyone to adopt an animal: "They say we rescue dogs. They turn around and rescue us."

Will Wrigley
Contributor
Suggest a correction 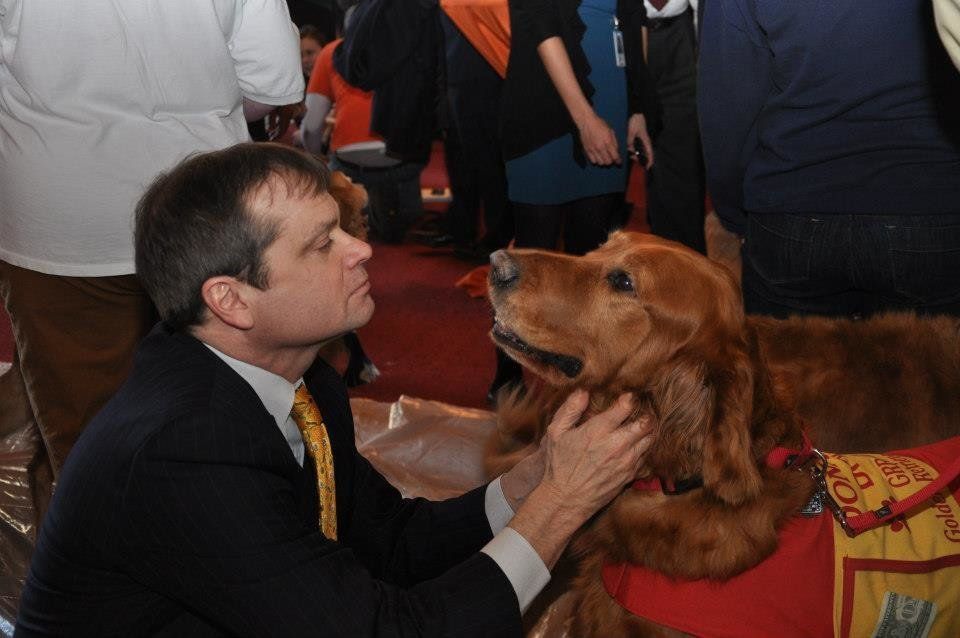 1 / 11
Rep. Mike Quigley
Rep. Mike Quigley (D-Ill.) pets a golden retriever, who is available for adoption at <a href="http://www.grreat.org/">Golden Retriever Rescue, Education and Training</a>. The retriever was on Capitol Hill for the Feb. 14, 2013, Paws for Love event, organized by the American Society for the Prevention of Cruelty to Animals and the Congressional Animal Protection Caucus.
ASPCA via Facebook