There are more than half a million dogs in New York City, and for two years now, Kim Wolf has documented as many of them as she possibly can.

Through her project, Dogs Of New York -- inspired by the series Humans of New York -- Wolf travels all over the city taking pictures of, and asking questions about, people and their pups.

Hardly anyone says no; in fact, most people, no matter who they are or what they and their pups look like, are delighted to tell Wolf about their sweet dogs, and about themselves.

"They light up when they start talking about them," Wolf says. "People love their pets ... That's something they all have in common."

Dilma and Caleb live in East Flatbush, Brooklyn."I am so blessed. Hallelujah!"

One of Wolf's favorite photos is of a man named Marion with his dog, Lady.

When Wolf met the two last winter, Lady was wrapped up in a piece of carpet. Marion explained that he'd found Lady in the street a couple of weeks earlier. He believed she'd been mistreated, and decided to give her a home.

Among the first things Marion did was stitch up this "jacket" to make sure Lady would stay warm.

"Used some shoe string to tie it on to the dog," Wolf says. "It just spoke so much to how strong a bond is with animals."

Marion and his dog Lady live in Bushwick, Brooklyn."I took her in off the street 2 weeks ago. I think she had been...

If one goal of DONY is for Wolf to have an excuse to pet so many dogs, another, more socially minded aim is to show that it doesn't take a fancy zip code to be a loving pet owner.

"I'm especially interested in sharing the stories of people who might have been discriminated against or pre-judged because of appearances -- whether it's the dog, the person, or both," she said.

Lulu is an 8-year-old dog from the Bronx. I met Lulu and her owner at the Humane Society of New York's low-cost...

That's why of all the personal things she talks about with her subjects, the one question Wolf never asks is the most New York question of all: What do you do for a living?

Tornado is in Manhattan for the Westminster Kennel Club Dog Show. He and his owner, shown here, traveled all the way...

Another aim of DONY is helping get resources to folks who might need some assistance providing for their pets.

For example, Wolf brought Marion and Lady a brand new winter coat soon after meeting them.

She also made them part of a nonprofit she runs -- Beyond Breed/Ruff Riders -- which provides pet food and other supplies, mostly to Brooklynites, who have fallen on hard times.

You may see her riding around Brooklyn, making deliveries out of a bright blue cart attached to an adult-sized tricycle.

Yesterday we used our Ruff Riders cargo bike (from Haley Tricycles) to deliver 150+ pounds of food and supplies to pet...

Making sure families can take care of their pets is an important part of keeping animals out of shelters where they risk euthanasia, she says. But this is also a way of recognizing that anyone can take a bad turn, and it shouldn't be made even worse, by losing an animal.

"I’m listening when people say, 'Our pets are family, this is important to us,'" Wolf says. "Having a pet might be a privilege, but I don’t believe that only privileged people deserve that companionship."

Wolf doesn't feel anywhere close to done with Dogs of New York; she has yet to get to Staten Island, and there are so many dogs that she hasn't encountered and so much work left to be done.

"There's a whole big world out there I want to make visible," she says. "There are so many amazing stories."

Diamond is a 1-year-old pup from Brownsville, Brooklyn."WE HAVE A DOG!!!!"

Oh, and by the way. Wolf has three Brooklyn dogs herself: Mary Todd Lincoln, Cappy and Fannie.

If she were to be interviewed for Dogs of New York, here's what she'd say about her pups:

I’d tell you that Mary Todd Lincoln once got stuck inside a sofa cushion and my other dog, Martha Washington, dug her out.

I’d tell you how Cappy once escaped from a fenced-in pond by swimming out the drainage tunnel.

I’d tell you Fannie was the first dog I ever lived with and I adopted her when I was 26 years old.

You’d ask me about the pit bull tattooed on my foot and I’d tell you his name was Sarge and he was a certified therapy dog who was nearly 17 when he died.

And then I’d have to end the interview because Cappy would be eating chicken wing.

But, Wolf says, she'd get out of being in the actual photo.

"I'm never in the pictures!" she says. 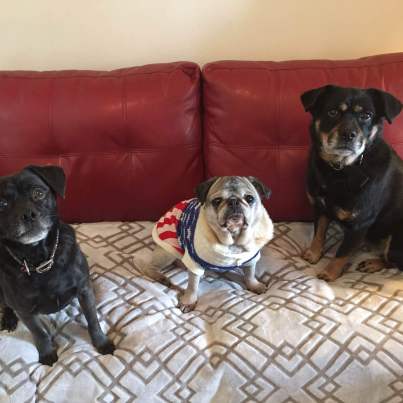 Carlos and his dog Frank live in East New York, Brooklyn. "He's like a little kid. He has his own blanket and he...

I met Blaze (1 year old) and his family outside the Broadway Junction subway station in East New York, Brooklyn. "Hold on, hold on. Let me show you something. Look at this! He sits on my arm like a statue!"

Syr is an 8-month-old dog from the South Bronx. He and Gage are celebrating today at the Puerto Rican Day Parade in Manhattan!

Junior lives in Bushwick, Brooklyn. He's 1 year and 9 months old. "We adopted Junior in April 2012. Someone gave him to us because they couldn't afford his care."