It's no secret that dogs recognize their owners' faces in the flesh. But what happens when your canine companion is shown just a photo or video of you?

A new eye-movement study from the University of Helsinki in Finland showed that dogs recognize us in images too. Wild.

In the study, 31 dogs watched a video screen displaying images of dog and human faces while researchers tracked their eye movements. Some of the images were of familiar faces -- their owner or another dog in the household. Others were of strangers. 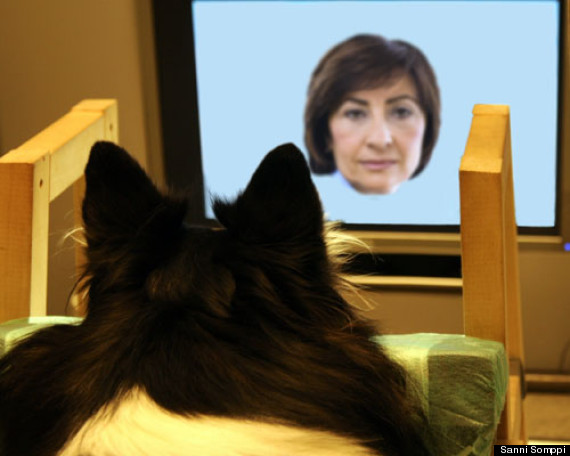 Dog watching a human face in the study.

What did the researchers find? "The results indicate that dogs were able to perceive faces in the images," study leader Dr. Outi Vainio, a professor of veterinary medicine at the university, told The Independent.

And, dogs were more likely to fix their gaze on the image of a familiar face than that of a stranger.

But you know what catches your dogs' attention more than your face? That of another dog. The study also showed that dogs gazed at images of dogs longer than images of humans, whether or not the faces were familiar.

This new research was published online this month in the journal Animal Cognition.