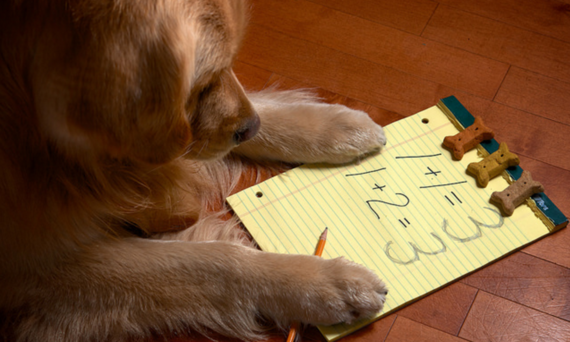 Are you a parent? Are you thinking of getting a dog? I most definitely want one. A big one. I had one as a kid, then another as a young adult. Since then, it's been a 23-year dry spell. Much of this comes down to circumstance. I've lived most of those years in places that either didn't allow pets, or simply couldn't accommodate a medium to large-sized pup.

The good news: I now reside at a location that's decently suited for pet ownership. (Nice-sized apartment, adjacent, park, etc.) The bad news: Adding a dog to my life means some financial planning is in order. We're talking vet bills, doggie toys, grooming supplies, the healthiest and safest dog foods - the list goes on.
So yeah, basically, a budget. This is infinitely easier said than done. The reason: budgets are all about math - a field everyone seems to comprehend except me.

So much so that heightened abilities in the field of mathematics (recognition of algorithms, numerical patterns and the like) have become a 21st century 'must-have'; one that overshadows everything from telekinesis to the ability to harmonize to Lou Reed songs. Previously, this was the kind of freak talent you'd only see on shows like Numb3rs, where the guy who wasn't Rob Morrow would thwart drug cartels using only a blackboard and an abacus or some such thing.

The implication here being that if you're a left-brained dude who knows his way around Pi, the world will eventually be your oyster. Hey, it worked for former floor mopper (and apple enthusiast) Will Hunting, a young man whose exceptional linear algebra skills nabbed him Minnie Driver and the nickname 'Good.'
I can relate to this skill in exactly zero ways. From the ages of twelve to sixteen, I failed math on no less than five occasions. During those years, the only July I wasn't condemned to remedial math summer school was spent mopping floors. Were I not petrified of calling anything ironic (thanks Alanis), I'd call this ironic.
I was, in fact, so bad at math, my school eventually barred me from taking the subject, something quite unprecedented in the hallowed institution's history. My principal literally wanted me to stop learning - a counterintuitive move for an educator, one might say.

So please, give some pause to me, the child left behind in our 'No Child Left Behind' world. Had I only been afforded a tutor or a more patient teacher, perhaps I too could now possess the mathematical prowess to understand Dungeons & Dragons dice or landing page templates or Sudoku puzzles. How different my life could have been.

But more importantly, I'd have known my way around a basic financial budget and would already own that big ol' doggie I've been hankering for. Is there an app for budgeting this kind of thing? Probably. I'm gonna try and download a few to see what's what. Fingers crossed the numbers required won't come across as ancient hieroglyphics to my math-riddled brain. Sit tight, doggie - I'm comin' for ya.