Fido ate the cat litter. Sparky peed on the carpet. Max chewed up a favorite book. Every good owner wants to find a way to show his or her pooch that it's wrong to misbehave, right?

Dogshaming lets owners do just that.

The Dogshaming Tumblr allows dog owners to post photos of their naughty pups and shame them in front of the whole world. Owners write down their dog's wrongdoing -- be it eating chocolate, chewing the couch or chasing the cat -- on a piece of paper and snap a mugshot of the canine with the letter of guilt.

Chris Mohney, the editorial director over at Tumblr, came up with the idea for Dogshaming.

"It was a half-baked joke that I didn't think would amount to much beyond a few hours' amusement," he told The Huffington Post via email on Wednesday. "It came from one reblogged post on my dash that had four doghsaming pics from various sources, so I reblogged the original one and posted all four (with sources) as individual posts."

The Tumblr soon when viral after Mohney opened the submit box.

"Within a few days it had thousands of followers and hundreds of submissions per day, way more than I had interest in keeping up with," he told HuffPost. "So yesterday I turned the blog over to someone else who seemed to want it very badly .. he/she has changed up a few things and deleted a ton of posts from the archives, presumably to make it seem more like his/her thing. You'd have to ask him/her directly for what the deal is there."

Despite the viral success of Dogshaming, Mohney does not have plans to further develop the page.

"I'm not really into investing the time and energy it would take to go down the road of media work, book deal, et cetera, for a blog about shaming dogs," he said. "Not to mention grinding through all those submissions. Funny though they certainly can be."

Dogshaming has picked up tons of fans already, including Kathie Lee Gifford and Hoda Kotb.

On Wednesday morning, the two chatted about Dogshaming on NBC's "Today" show and even shared one made specifically for Gifford's pup, Bambino.

What did Bambino do? "I drank all of Mommy's booze."

Check out some of our favorites below and head over to the Dogshaming Tumblr to see the full collection (or submit your own!). 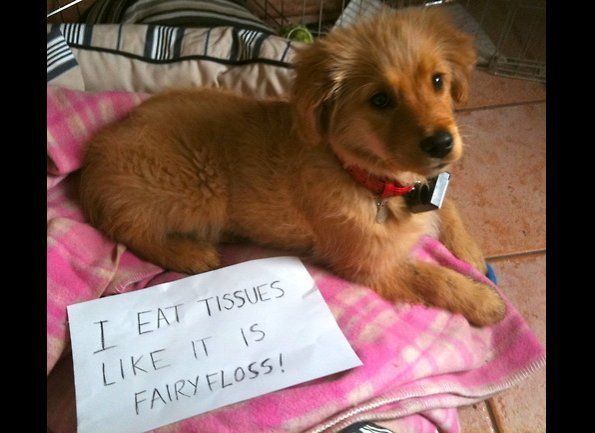