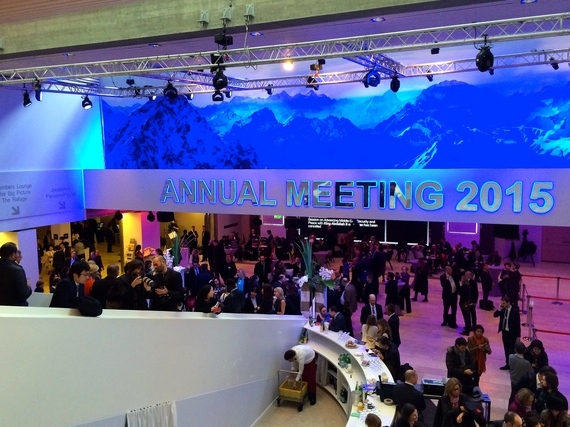 Entering my third year at the World Economic Forum I feel anointed less with the belief system of holy water but more with a sprinkling of seasoning in preparation for the intellectual feeding of the world's 4,000 on the hallowed ground of mount Davos.

So once more I board the Davos Express (BA London to Zurich) where the lengthy business/first class line befuddles the elite unused to the concept of queuing. On board an American suit growls out to a seated passenger " I thought you of all people would be going private." This is no ordinary commute.

It is with a wry familiarity that I spot first timers, particularly those of wealth in shock at the state of their alpine lodgings; rooms like saunas, cladded and minuscule, the smell of boiled buffet wafting through tight corners and 1970s carpet. Because Davos is ironically not about material luxury (only princelings, billionaires and those with a security entourage occupy the few hotels of grandeur), but about the fervor of connectivity with which deals can be made and the world can be changed.

Our citadel of convergence, the Congress Centre, welcomes us with friendly but fatherly security and warm rooms of knowledge. Busyness, real or its semblance, permeates in every direction of carpeted corridor. "Hello I export rice " a woman with knife edge heels and tenacious eyes introduces herself. And she does, to millions.

Everyone and everything is up-close. Francois Hollande looks like Francois Hollande and Mark Carney, tired, is still a rock star. Christine Lagarde hones in with tanned graciousness and George Osborne's eyes dart. Arianna Huffington impresses with verve and conviction and Peter Gabriel twinkles with talent. Jim Yong is surprisingly handsome. John Kerry really is very tall.

Getting into desired sessions is like procuring priority seating on an over-booked Easy Jet flight when 100 percent of the passengers have paid for speedy boarding. 200 participants often wait to be admitted into a space that accommodates 70, and, like a forced sleep on the hyper active, one has to accept that an hour or two each day will be spent standing in line.

Inclusion, cooperation and collaboration of public and private sectors is the underlying desire this year; there is a palpable urgency to affect significant progress vis-à-vis climate change, poverty, corruption, cybersecurity and education. Every action is preceded by the word sustainable and I wonder at the possible chain of environmental toxicity in the making of Ban Ki-moon's sparkly lapel button, or in the Forum's abundance of leather chairs and moulded lecterns.

Between sessions I am handed a droplet of DNA where I'll store my future files, talk to someone whose brain is now an app and discuss the concept of transmissible cancers.
And I learn that Artificial Intelligence will not highjack humanity, though "The American Gut Project" might, and about accountable infinity and structural addictions ("You can't talk yourselves out of things you've behaved yourself into"). I now too wish for nano technology breakthroughs, a galaxy zoo discovery and the success of the Global Science Outlook.

I can't help but conclude that Davos is a functional ideal of what societies strive for: a diverse and educated people with commonality of purpose, values and tolerance within a non-overt disparity of income. Politeness and regard for others are prevalent. Take away the millions and it is about a community spirit of potential where anything is possible, where women pioneers are teaching App-making to kids in Gaza, theatre studies to disabled adults, and providing thousands of jobs across the Asian continent; where a female union leader has convinced her male miners to diversify into alternative energy sources, and where a woman finance minister is implementing reforms into every geological sub-stratum of corruption imbued in her country's genealogy. Even the ski guide is doing a PHD in snow composition (to pre-empt future avalanches, before you laugh). We might die of intensity in such a world but not from a lack of opportunity.

And Davos continues even when our week-long citadel is converted back into film lot. On an early Sunday morning bus back to Zurich airport, a former U.S. energy secretary discusses quantum physics with a London hedge funder and a Harvard economist discusses Moore's Law with a think tank director. And collectively we listen to non-Euclidean geometry until the sound of airplanes ahead reminds us of our imminent return to the land of prejudice-laden postulates and coffee we have to pay for.