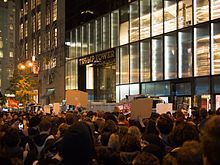 One thing I know from years of doing liberation theology myself as well as teaching it to others, is you cannot do this kind of work unless you know what time it is.

This is a dangerously reactionary time in the United States. Rape culture was just elected to the presidency. Racism and bigotry have been electorally approved. Homophobia just metastasized again.

In other words, time to wake up, get up and out the door.

This moment demands you take a side. Either you side with those who are being threatened and harmed or you are siding with those who think they have the god-given right to deprive certain people of their human rights, their dignity and sometimes even their lives in the name of god and country. It's that stark.

Liberation theology calls out the enablers of oppression, and as a Christian pastor and teacher, I call out the White Christian Evangelicals who, by a margin of 81% to 16%, voted for Trump.

German feminist liberation theologian Dorothee Sölle knew this kind of racist political Christianity well. In her book The Window of Vulnerability: A Political Spirituality she called it "Christofascism."

Christofascism, according to Sölle, is a Christianity that individualizes and sentimentalizes Jesus, severs his connection to the Hebrew prophets, and makes a mockery of his ministry and mission to the poor and the marginalized. Christofascists have a "God without justice, a Jesus without a cross, an Easter without a cross -- what remains is a metaphysical Easter Bunny in front of the beautiful blue light of the television screen, a betrayal of the disappointed, a miracle weapon in service of the mighty."

And I tell you, the mighty will take that religious fig leaf and use it to cover their crimes against the very people Jesus of Nazareth taught were the heart of God's kingdom on earth. This is in train even as I write these words.

Liberation theology also teaches you to challenge false consciousness, the stubborn blindness of those who will not see oppression but who instead side with the oppressors even sometimes at their own expense.

I have a message for these women. You may think your race and even your class solidarity will protect you from gender-based violence and discrimination. You are wrong. It never has and it never will. And yet you were willing to throw African American women and Latinas into the maw of this woman-hating administration in the hope you would save yourself. You won't.

When you take sides in a liberation struggle, you do not waste your time with calls to 'understand' the other side or respond to calls to 'try to work with them.'

Don't bother. Liberation analysis shows you understand them all too well, and it is simply immoral to collaborate with oppressors.

Instead of 'reconciliation,' call them to confession, repentance and change. Seek out the biblical prophets, such as in Isaiah 58, and proclaim true justice.

Here's what Isaiah 58 says, adapted for this time:

You call out the oppressors and you "do not hold back." (1)

Call them out of their country club churches and their empty rituals. (3)

What made you think white self-congratulatory worship pleases God? Get serious. (4)

Let go of your illusions about gender. They will not save you.

Instead of patting yourself on your white, middle class backs, "loose the chains of injustice... and set the oppressed free" (6)

Meanwhile, the rest of us will be in the streets standing up and speaking out.

Come join us when you figure out what time it is. You'll be welcome.