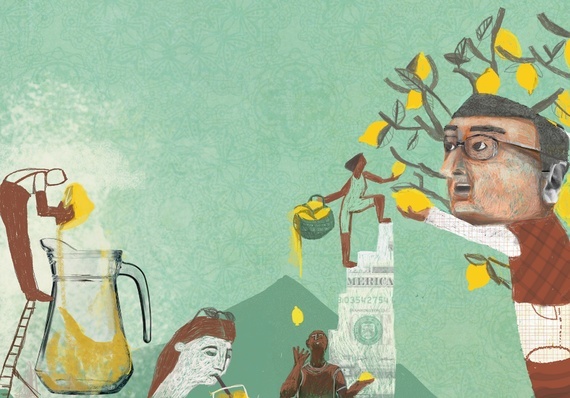 Marc Levy is the most read French author in the world and has sold more than 40 million copies. His novels have been translated into 49 languages ! In fact, Steven Spielberg acquired the film rights for his first novel, an international best seller.

Marc is the perfect example of an individual who is doing well by doing good; he used his success to make a positive impact. I believe being successful is just the first part of the equation; it's what you do with it that's more important. For Marc, it's rooted in his DNA. He joined the Red Cross when he turned 18, and before his full time career as a writer, he was a tech entrepreneur and an architect.

You've been brave and candid in interviews about the ups and downs of being an entrepreneur. What is one key lesson you would share with young entrepreneurs, based on your own personal experiences?

My experience dates back over twenty years ago, and with the many ways society has since changed, I doubt it would still be the current reality. But to answer your question, I understood that being an entrepreneur was not "working for yourself," as the popular saying goes, but working for others. As visionary as an entrepreneur may be, they never possess universal knowledge, and the project's success will largely depend on their ability to surround themselves with others, trust their teams, lead with an open ear, remain humble, and bring out others' talents to make them shine. It's also about knowing how to challenge yourself daily, and realize there is a lot to be learned from your failures.

As a teen, you volunteered for the Red Cross to help with roadside assistance and emergency relief efforts. What motivated you to do this that young?

I was fortunate enough to have received an education, I always ate my fill and had clean drinking water, and I benefited from sound infrastructures, at least in comparison to the number of cities and countries where others had grown up. I enjoyed a freedom of expression that I felt I owed to my forefathers. So before diving head first into my adult life, I wanted to be useful, to give back a little of all I had been given. I also believe we are confronted with a truly existential question at the end of our adolescence and the most effective way to answer the question "who are we?" is to make ourselves useful and feel useful to others.

From running a computer graphics company, volunteering for the Red Cross, to co-founding an interior design and planning company, how did these important shifts in your career help you in your journey to becoming a novelist and the most read French author in the world?

Writing requires observation and listening. Being a novelist is not telling what you see, it's telling what you remember. (Even if it's only several minutes after the fact). As such, having been lucky enough to have lived through so many different things, traveled so many places, and met so many people from different backgrounds and cultures, of course have all nourished - and continue to nourish - my writing. Each part of my life enabled me to spend time in very diverse professional settings, and in effect, around different preoccupations and ways of thinking. At the workbench, writers have a fairly immobile job, but whenever not at work, they must constantly be moving, their minds always on the lookout for the crossroads of the world.

Many creatives - artists, writers, etc - have made their mark much later in their lives. It's not always easy to try something new when you're older, though. Have you felt fears and insecurities when you were writing your first novel? How did you overcome them?

Oddly enough, not for my first novel, because I was completely unconscious of the fact I was in the midst of writing a novel. Stage fright, fear, uncertainty - these all came along with my second novel and continue to be my writing companions, ever more so with each book. I believe they're necessary; writing requires you to remain humble before the page, to question yourself each day, and especially to question your work.

What is the greatest lesson you've learned so far as an internationally acclaimed author?

Writing is a place of freedom, a world where everything is possible. But to preserve this freedom, you have to work as seriously as possible without ever taking yourself too seriously; write with your eyes on the page, never on yourself. Humility in one's work is the most beautiful way of respecting this freedom writing gives us.

I don't know about that, but in any case it makes you much happier.