After the designers behind Dolce & Gabbana made controversial remarks about gay parents adopting and using in vitro fertilization, celebrities threw their weight behind a campaign to boycott the fashion label.

Now, advertising agency DigitasLBi is literally dropping D&G by removing the "D" and "G" from its name. The international agency, which counts Puma and eBay among its clients, will call itself "iitasLBi" for a week. 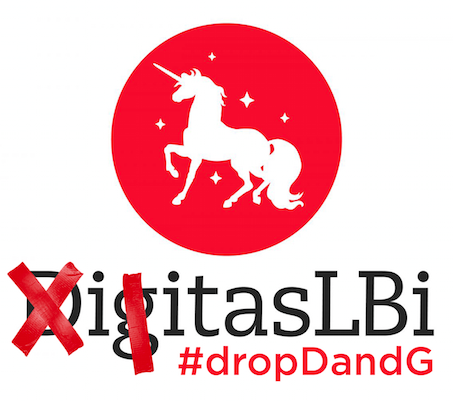 The agency's chief creative officer, Ronald Ng, told the Huffington Post that the idea started when employees were discussing throwing out their Dolce & Gabbana shirts. “What if we decided to do a very strong symbolic move and drop two letters?" he recalls.

“Instantly it struck us as perfectly consistent with our values,” said CEO Tony Weisman, who describes the response from clients and employees as "absolutely overwhelming, instant and very heartfelt.”

Ng added that he was awake until 2 a.m. Wednesday morning, answering all the encouraging messages he received from different time zones.

“When you have the power to communicate an idea this simply … then you don’t have a choice. You do it,” Weisman said.

"What is family for Dolce and Gabbana?" the interviewer asked, referring to the label's #DGfamily ad campaign, a compilation of crowdsourced family photos.

In reply, Dolce referred to children conceived through IVF as "synthetic children. Wombs for rent, seeds selected from a catalog."

"I'm gay, I cannot have a child," he added shortly. "I believe that we can not have everything in life ... Life has its natural course, there are things that must not be changed. And one of these is the family."

The Telegraph reports that although Gabbana revealed in 2006 that he had once asked a female friend to be a surrogate so he could become a father, he also expressed himself "opposed to the idea of a child growing up with two gay parents."

Elton John, who has two children via IVF with his partner David Furnish, headlined backlash against the designers' comments with an Instagram and the hashtag #boycottdolcegabbana.

"How dare you refer to my beautiful children as "synthetic," he wrote, calling IVF "a miracle that has allowed legions of loving people, both straight and gay, to fulfill their dream of having children."

Other celebrities have joined the boycott movement.

These designers horrifying views are never in fashion. Their clothes are as ugly as their hate. #BoycottDolceGabbana

Just round up all my Dolce & Gabbana pieces, I want to burn them. I'm just beyond words and emotions. Boycott senseless bigotry! #boycottD&G

My twin girls, a MIRACLE of IVF, were so distraught by D&G calling them "synthetic" that I finally had to reboot them. #BoycottDolceGabbana

The designers have responded to the backlash by arguing their views are "traditional" rather than judgmental.

A longtime Dolce & Gabbana employee resigned over the interview, according to Queerty, calling the pair's words "totally incompatible with my conscience as a human being in the contemporary world."