Just because a store has the word “dollar” in the name doesn’t mean it’s actually the cheapest place to shop. 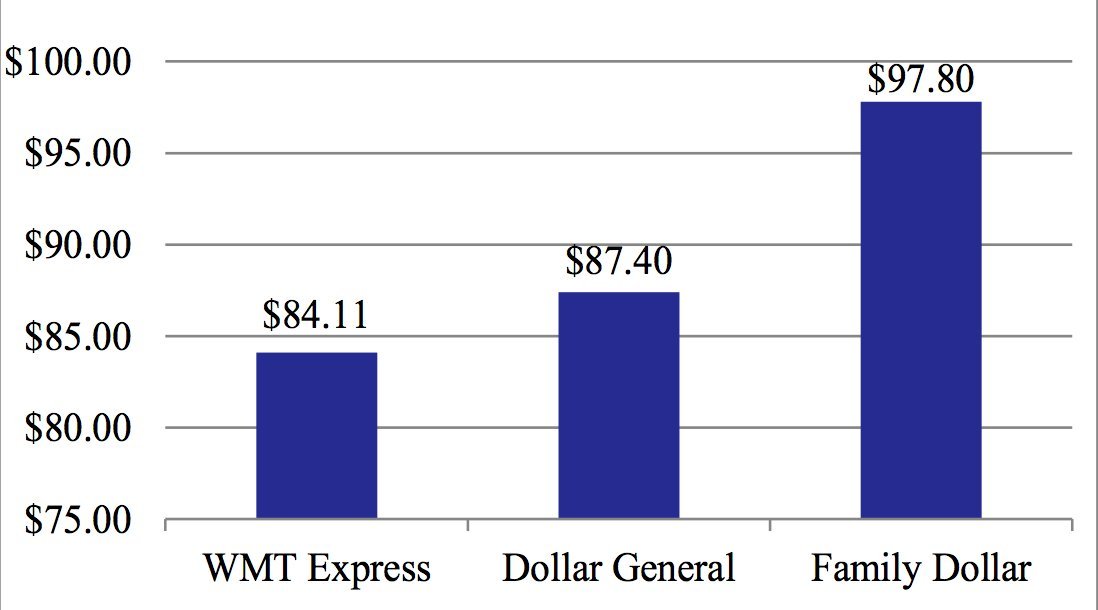 This chart from Wolfe Research shows how much a typical basket of goods costs in Pikeville, N.C., at Dollar General, Family Dollar and Walmart Express.

Walmart's sheer size makes the difference: With more than 4,000 stores in the U.S., about 90 percent of Americans live within a 15-minute drive of a Walmart, according to Wolfe. That gives Walmart an edge in squeezing bargains out of its suppliers.

The Wolfe analysts argued that a Dollar General-Family Dollar merger would be the biggest win for consumers out of all possible dollar-store combos. In Wolfe's view, a big dollar-store chain could effectively compete with Walmart on price by using its new-found size and strength to get better deals from suppliers.

Family Dollar and Dollar General already have more stores than Walmart -- 8,200 and 11,500, respectively, in the U.S. But their stores are much smaller, and they carry much less merchandise. More than 3,000 Walmart stores are massive Supercenters.

A Dollar Tree-Family Dollar combo wouldn't be as strong, because Dollar Tree would have to load itself up with debt to afford Family Dollar, according to Wolfe analysts. And Family Dollar and Dollar Tree have such different product lines -- Family Dollar sells a variety of products on the cheap, Dollar Tree essentially sells party supplies for $1 or less -- that joining forces wouldn’t really help the two companies muscle suppliers.

It's worth noting that mergers are often bad for consumers, limiting their choices and raising prices. And price isn't necessarily everything: Walmart has lost some market share to Dollar General in urban areas where shoppers are willing to pay a 5- to 7-percent premium just to not have to schlep to a suburban Walmart.

In response, Walmart is launching smaller stores, known as Walmart Express, to appeal to customers looking for convenience. As the chart above shows, those stores have lower prices than dollar stores, too.