At first glance, the fortunes of American families have significantly improvement recently. Household net worth has rebounded back to roughly where it was before the financial crisis. 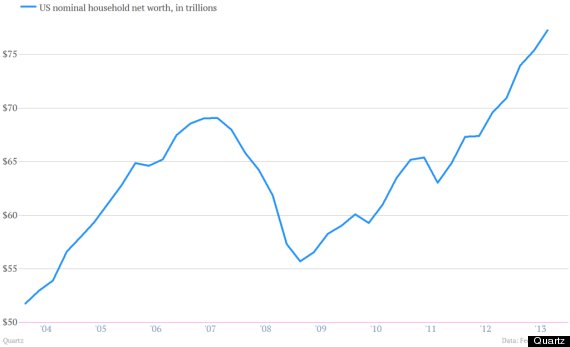 Why? A surge in stock and real estate prices. The stock market is up 46% since the end of 2010. And after years of pain, housing prices are rising too.

More from Quartz:
-- Why every gadget you own could soon take voice commands just like Siri
-- Inside Jeff Zucker’s plan to save CNN
-- December’s weather was so terrible, it kept a quarter million Americans home from work
-- Making time for workouts can actually help you have it all

There’s a catch. While about 50% of Americans own some kind of stocks—either individual shares or mutual funds—the richest Americans own most of the market. That means most of the exceptional stock market gains accrued to what Federal Reserve research describe as “a small number of wealthy families.”

Homeownership is a bit more democratic. Houses account for a larger chunk of the assets of the US middle-class compared to the wealthy. But again, the poor are left out.

Economists argue that things like food stamps and unemployment act as crucial bits of stimulus when the economy is weak. Cutting them can act as a headwind to growth. That’s certainly the case for low-end retailers such as Family Dollar. The store chain’s shares fell sharply this week after it reported disappointing earnings. Family Dollar CEO Howard Levine had this to say on the subject:

For the last several quarters, we’ve discussed the economic challenges our customers are facing. Over the last two years, I think we’ve seen a growing bifurcation in households. Higher-income households who have benefited from market gains, better employment opportunities, or improvements in the housing markets have become more comfortable and confident in their financial situation. But our core lower-income customers have faced high unemployment levels, higher payroll taxes, and more recently reductions in government-assistance programs. All of these factors have resulted in incremental financial pressure and reduction in overall spend in the market.

Translation? As poor Americans come under more and more pressure, more and more of Family Dollar’s revenue is tied to low-margin sales of necessities like food. (Sales were strongest during the first fiscal quarter in Family Dollar’s “consumables” category, especially in areas like frozen food.)

The fact that so many Americans are being forced to curtail spending at the cheapest discount retailers should give anybody cheering the US recovery something to think about.