Coat of Many Colors, a new teleflick loosely built on Dolly Parton's 1971 song about a plucky young gal in a patchwork jacket, makes Hallmark Christmas movies look like The Walking Dead.

If everybody from San Diego to San Francisco watched this story, which revisits a pivotal year or so in Parton's Tennessee childhood, they would shed enough sentimental tears to clear up California's water crisis. 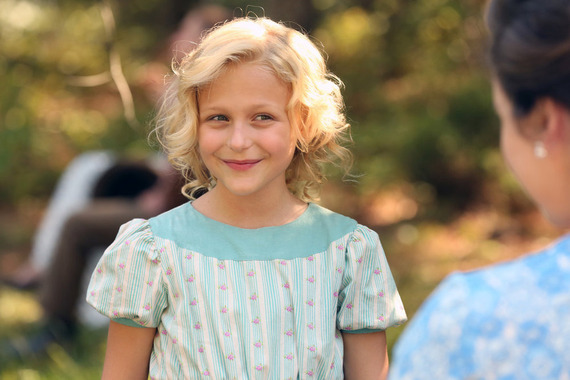 Expanding a song into a whole movie is risky business, and Coat of Many Colors doesn't exactly grow into Gone With the Wind. Say this, however: It remains true to the spirit and message of the song. It also has a charming lead actress in Alyvia Alyn Lind (above), who plays the young Dolly.

Like the song, the movie extols faith, love of family, love of the Lord and a child having the strength and wisdom to stand up for those values when others mock them.

Who's going to be against that?

For those who don't remember the song, which peaked at No. 4 on the charts after its release and has since become a country standard, it recounts about how young Dolly, whose large family barely scratched out a living by growing tobacco in the Tennessee mountains, lacked a coat one year as winter approached.

The movie reveals it was the winter of '55, for those keeping a timeline.

So her mother collected some rags and stitched them together into a patchwork jacket that she called the coat of many colors, just like Joseph's in the Old Testament.

Young Dolly wore it to school, expecting everyone to feel the love and pride she knew her mother had put into the coat. Instead, she was mocked - think "Rag Doll" - as she tried in vain to explain why her coat meant more than her classmates' stylish store-bought models.

The song never reveals how that showdown ended, as Parton switches to a broader philosophical plane. "One is only poor," she sings, "only if they choose to be."

Her point, of course, is that one does not become rich through the acquisition of material possessions. Again, who can argue?

The only potential problem is that material possessions do matter when, say, you don't have enough food to feed the kids. Few people choose that level of poverty. They just have to deal with it if, say, their public officials decide that nutrition assistance programs are an expendable luxury because poor people are lazy.

In any case, Coat of Many Colors includes an extended section on the coat drama. In this incarnation, Dolly isn't mocked as much as she's bullied, with some big kids ripping it off her back and locking her in a closet, which is bad because she's afraid of the dark.

All this leads to a scene with Dolly's mother that you won't find in the song. We also won't spoil it here, except to say it fits well with the larger theme of the movie, which is young Dolly's journey of discovery.

That journey becomes more engaging because Lind has a winning screen presence. In fact, she dominates the film, since Coat of Many Colors rather quickly reveals itself as a biopic set against the backdrop of family drama. When a terrible tragedy slams Dolly's mother Abby (Jennifer Nettles), we mostly see how it affects Dolly. When her mother and father Lee (Ricky Schroder) struggle with faith, we mostly see young Dolly's struggles with faith.

Since we know where it's all going, with Dolly growing up to become a star even bigger than the one she envisioned in her childhood dreams, the film doesn't have to build much tension. Instead, it can focus on the power of family and faith and the purity of the Godly rural life, where the eight Parton kids jump into Mom and Dad's bed and they all sing "Poor Folks Livin' in a Rich Folks' Town." 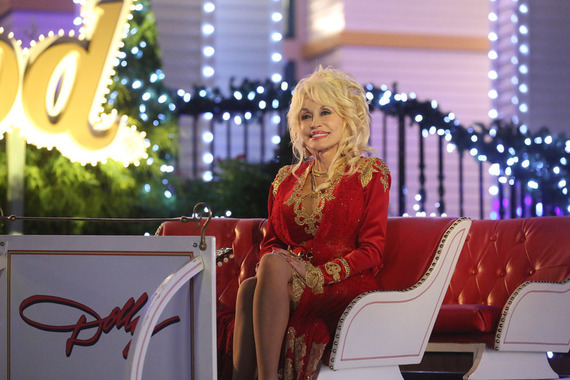 Parton makes a personal appearance at the beginning and end to sing the title song and talk about how she has always wanted to tell her inspiring story. She also says she wanted it to come out at Christmas because she loves her childhood family Christmas memories.

It's a movie with no bad guys, or at least no bad guys who can't be redeemed with love, kindness and belief in the Lord. If you're among those who see a real-life world that seems to keep getting bigger, colder and scarier, Dolly Parton offers to wrap you up for two hours in a world that's cozy, comforting and warm.