During February of this year there had been rumors of as many as 260 dolphins dead on the north coast of Peru. But some authorities dismissed the report. I backed off the story. Then on March 23 I received an email from Dr. Carlos Yaipen Llanos, Lima-based director of the marine mammal rescue organization, ORCA Peru, stating there had indeed been about one thousand dolphins stranded along the north coast of Peru. Lest there be any doubt, stranded means dead in virtually all cases.

What was the truth of what was happening along that bleak, desert coast, location of one of the most abundant fisheries in the world and the mating and feeding habitat for huge numbers of dolphins, sea lions and birds? If the numbers reported were even close to accurate, this would be among the greatest dolphin mortality events ever recorded. These marine mammal die-offs are called unusual mortality events (UMEs) and in the United States a declaration of an UME triggers funding for interdisciplinary teams of experts to investigate the situation. There is currently a UME in the Gulf of Mexico, likely resulting from the Deep Water Horizon oil spill.

I called Carlos. He had a man on the ground north of Chiclayo who confirmed large numbers of dolphins stranded along 200 kilometers of the coast.

I immediately packed my bags and booked a flight for Lima. Carlos met me at the airport. We grabbed an overnight bus to Chiclayo, the closest large city to the epicenter of the UME. We linked up with three young ORCA women who had done some scouting for Carlos. They confirmed dead dolphins on nearby beaches but had traveled only a few miles.

At 11 a.m. we packed into a four wheel drive Toyota pickup with a backseat cab and drove through the coastal town of San Jose to the beach, where we cranked a right turn and headed north at low tide on a beach that was mostly firm. Our goal was to find the one thousand beached dolphins reported. We'd been told the greatest concentration of corpses was three hours drive north.

Within a few hundred yards we began to see dead dolphins in ones and twos. Then Carlos saw a freshly stranded Burmeister's porpoise calf. Some of the stranded animals were highly decomposed but this one was in such good condition we stopped to do a necropsy.

As we progressed along the beach Carlos and his team performed necropsies on a couple more freshly stranded dolphins. The sight of a newborn common dolphin, umbilicus still attached, tongue grotesquely swollen, was wrenching. I thought of the years of life that had been denied this beautiful creature.

We observed two species stranded. About 95 percent were long-beaked common dolphins (Delphinus capensis), which may have migrated from Central America to feed on the abundant fish of the nutrient-rich Humboldt Current that runs along Peru's coast. The remainder are Burmeister's porpoises (Phocoena spinipinnis), a species that feeds in deep water.

As we raced along the hard sand at the edge of the surf line we cried out when we saw a dead dolphin. At first they came every couple minutes. But then we'd hit intervals when the cries would go, "Dolphin! Delphin! Otro! Dos mas! There's another one up by the dune." 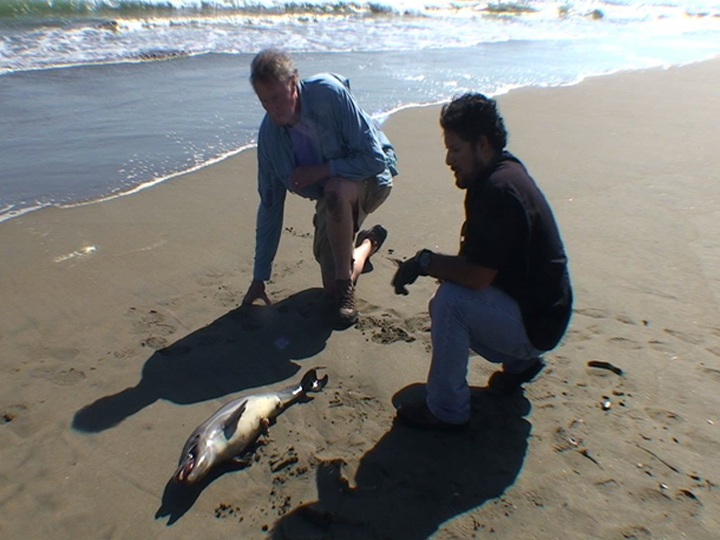 When I asked for a total from Carlos' s assistant I was stunned to hear she'd tallied over 200 dolphins in just 45 minutes. Then we hit a length of beach no more than 100 yards long in which we found ten dolphins of varying levels of decomposition, indicating they had come ashore at different times.

The numbers continued to mount. By the time the rising tide forced us off the beach the count had reached 615, over 135 kilometers. We never did find the dense concentrations of stranded dolphins, just an endless succession of bodies over a long stretch of beach.

Carlos and I had known each other for four years. We're conducting a study of Peruvian fishermen who eat dolphin meat. While illegal, this is commonly done and the authorities do not have the resources to prevent it. But Carlos had discovered something important. The fishermen who ate dolphin meat regularly have a disproportionately elevated incidence of diabetes. There is an established link between high levels of persistent organic pollutants (POPs) such as PCBs, and endocrine irregularities. These include changes in the way the body uses sugar.

As the day wore on, the tide moved up the beach pushing us closer and closer to the dunes. By 3 p.m. we were driving through breaking surf. I felt we'd accomplished our mission. We had counted 615 dead dolphins and had evidence of the tragedy and necropsy samples that might shed light on what had produced this catastrophe. But we were now in danger of being trapped on this remote beach by the rising tide.

We found an opening in the dunes and headed east toward the Pan American Highway. Initially we passed through an area behind the dunes that was flooded when the sea was high enough to crest the dunes. But it was now dry and reasonably hard. We made good time.

We then entered an area of powdery sand blown up into ridges that were shaped just like waves. We'd go over the top of a crest then plunge into the trough. Hints of previous traffic were everywhere but no clear road to the Pan Am. Our little fellowship consisted of Carlos and me, a driver, a tall blond female student from Holland and two female Peruvian members of ORCA-Peru. It was pretty cramped and uncomfortable as we surfed the desert.

Eventually we found ourselves perched over a vast open pit mine. Massive trucks and earthmovers gouged the earth for phosphate. We made our way down tracks in the desert, occasionally stopping to ask guards in variously colored hard hats for directions. They looked surprised but pointed east.

Eventually we reached a huge conveyer belt and then saw the exit gate, which was open. As we approached it, men in various colors of overalls and hard hats came running. The gate was dropped in front of us. We were in the land of Dr. No.

They asked for our IDs and strutted around, writing on their clipboards. Carlos laughed saying, "They're so screwed because they've allowed us to breach their security." I thought, "They're nuts to write this down. They should just pass us through and hope no one knows we got through their lines."

Finally they let us out and we ran back to Chiclayo. On the drive back we pondered their motivation in detaining us. What were they afraid of -- that we'd steal their phosphate? Or was there something toxic in the mining process that was running into the sea. There was that one huge pipe running through the desert and several ponds filled with greenish water. The words "something evil this way comes," occurred to me.

Back in Lima, Carlos began doing histopathology analysis. That will be followed by immunohistochemistry tests for morbillivirus followed by tests for immunoglobulin antigen reaction with samples from fresh carcasses. We will also run a test on brucella if possible.

The possible cause of causes of the UME are, as of this writing, absolutely unknown. Some have suggested seismic testing by oil companies, but many experts disagree. Carlos has performed tests for damage to the periotic bones (inner ear) of the dolphins he has necropsied and found some evidence of damage. But it is extremely difficult to perform such tests in the field. Often damage occurs to the fragile bones in the necropsy process. Further there is no indication of damage to the skin of the dolphins, something that would occur with sufficient blast to cause damage to the periotic bones.

Since there was no visible damage to the stranded dolphins, fisheries interactions, which have caused the deaths of millions of dolphins in the eastern tropical Pacific tuna fishery, can probably be ruled out.

Another candidate for the UME would be morbilla or other virus. Dolphins all over the world are suffering from compromised immune systems due to accumulation of POPs. These chemicals bioaccumulate up the ocean food web and are especially concentrated in apex predators such as dolphins. Some of the best-known POPs are PCBs, DDT, and dioxins.

Dolphins with compromised immune systems are susceptible to diseases such as leptospirosis, brucellosis and distemper, according to Dr. Peter Ross of Canada's Institute of Ocean Sciences and a world recognized expert on the impact of toxic chemicals on marine mammals.

While the UME in Peru appears to be one of the worst ever for dolphins, it is not unique. In my book, The Voice of the Dolphins, (5) I describe the die-off of hundreds of bottlenose dolphins along the East Coast of the United States in the late 1980s. No definitive conclusion was reached on what caused that tragic event but the multidisciplinary study group was brought together to issue findings concluded, "The results for the beach-cast specimens (dead dolphins) obviously reflect the levels of contaminants in the nearshore environment where the dolphins accumulate these substances."

Another major UME involving morbillivirus killed several thousand striped dolphins along the Spanish Mediterranean coast from 1990 to 1992, followed by another in 2007. And significant die-offs of bottlenose dolphins have occurred along the coasts of Texas and Florida in the Gulf of Mexico, though nothing of the magnitude of the 1987-1988 UME along the East Coast. Another catastrophic event occurred in the North Sea during the late 1980s. Some twenty thousand seals, perhaps half of all Europe's population of these animals, died.

Given the paltry resources available to investigate the die-off of dolphins along the Peruvian coast there is a strong possibility that the cause of the event may never be known. What is known is that catastrophic die-offs of dolphins and other marine mammals are occurring with greater frequency and virulence around the world. They are an indication that the oceans are in deep, deep trouble; perhaps greater trouble than we have imagined.