I recently had the pleasure of accompanying my husband on a business trip to Tampa, Florida. Even had I done absolutely nothing but lay by the pool for three days, this would have been a delight after enduing one of the coldest, snowiest winters in recent memory. However, I knew I couldn't be that close to the Gulf of Mexico without indulging in one beach day.

Weighing various possibilities, I decided I would most enjoy a dolphin watch/snorkel trip. Ultimately I chose to spend my beach day with Island Boat Adventures because it offers dolphin watching and snorkeling tours, two of my favorite things!

The morning of my voyage, I met my captains and fellow travelers at 8:30 a.m. for our 9:00 a.m. departure. The two captains, Captain Hans and Captain Vinnie, are veteran boaters with great people skills. Hans sailed the boat -- Calypso Cat, a 45' catamaran -- while Vinnie served as his mate. My fellow travelers represented a diverse group of families, couples and friends traveling together. One thing we all had in common, though, was our sense of adventure. 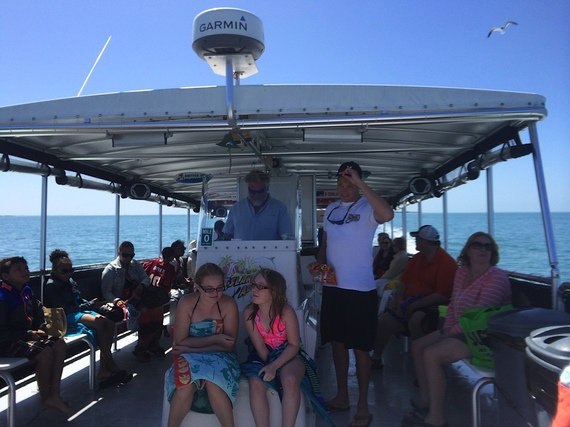 It was a glorious, sunny morning, although a bit on the cool side at 64°. Island Boat Adventures' four-hour trip consists of a 60-minute boat ride from Magnuson Marina Cove Resort in St. Petersburg to Egmont Key -- a small island slightly offshore St. Pete Beach in the Gulf of Mexico. The boat ride is followed by an hour or so snorkeling at Egmont Key's Fort Dade ruins, another hour to explore Egmont Key and enjoy a BYO picnic lunch, and then the return trip to the marina.

As we set off across Tampa Bay we kept our eyes peeled for dolphins. It wasn't long before we were rewarded with our first dolphin sighting! Captain Hans slowed the boat and we drifted for a few minutes while the dolphin made several appearances in our vicinity. According to Captain Hans, the dolphin was probably feeding because it was alone and kept diving and surfacing on a regular basis. Dolphins often feed alone, but they live in groups called pods. This was only the first of many dolphin sightings throughout the day. We also saw numerous birds including blue herons, osprey, pelicans and, of course, sea gulls. 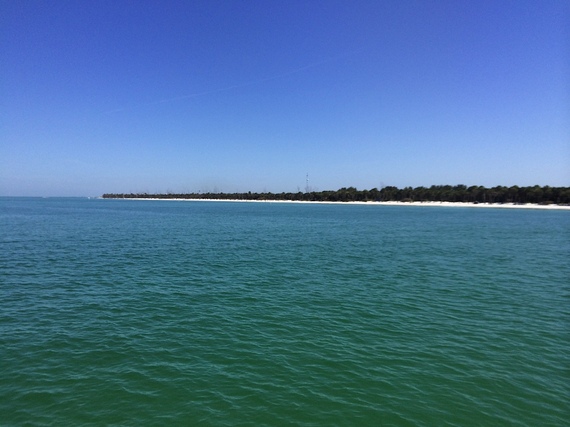 Due to the coolness of the morning, Captain Hans made a slight adjustment to our schedule. We stopped at Egmont Key before snorkeling. Egmont Key is a state park with a lot of history. There's a lighthouse on the island that dates to 1858. Also during the 19th century, the island served as a camp for captured Seminoles, was occupied by the Union Navy during the Civil War, and in 1898 Fort Dade was built because of fears that Tampa would be invaded during the Spanish-American War. The fort was used until 1923, but today it's in ruins.

After independently exploring Fort Dade's ruins and searching for shells and wildlife, we returned to Calypso Cat for a short trip to the other side of Egmont Key and one of Fort Dade's sunken gun batteries. Today the old battery serves as a haven for many of the Gulf of Mexico's fish. At least it does when the water is warmer! 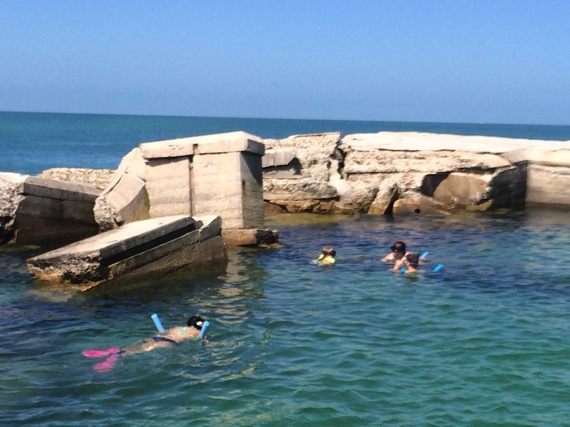 Much to my dismay, the water in early April was only 68°. For a native Chicagoan this shouldn't have been an issue, but I've grown soft over the years. When I jumped into the Gulf I was cold, and apparently the fish felt the same way because there weren't many fish to see. All I saw were a couple small schools of tropical fish I couldn't identify and a lone parrotfish. However, according to Captain Hans, the water warms up considerably in the summer leading to an abundance of different tropical fish and occasionally manatees, seas turtles, and manta rays. That sounds so much better. I'll have to go back when the water is warmer.

All in all, it was a delightful day spent on a nice boat exploring beautiful and unique surroundings with a group of very engaging people. If you find yourself in the Tampa area and love the ocean, wildlife, history, and adventure, I think you'll enjoy this tour too.