We're not in Kansas, anymore in our popular imaginations. In fact, Dorothy, in the 21st century, we're not even on land anymore. We're underwater. Perhaps it was inevitable that as coastlines sink and monster hurricanes flood our cities with increasing fury, we wake up to the fact that ours is a blue planet. We land-dwellers are in the minority. Humans will sink or swim with the rising tides of "global weirding." What better time to remember and apprentice ourselves to the mermaid myths that have inspired us for thousands of years? And who better to teach us than real-life mermaids, like Australian Hannah Fraser, who was one of the first and now most prominent professional mermaids? 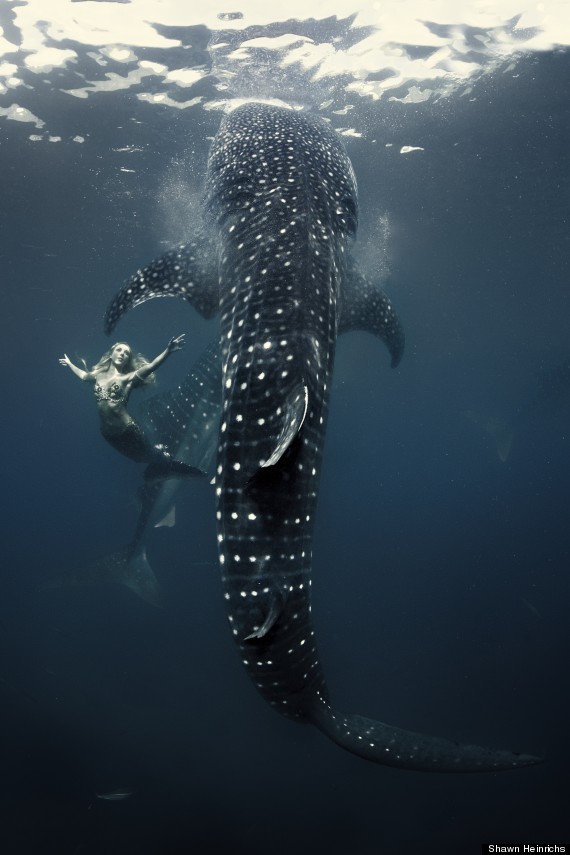 Recently Fraser worked with Shawn Heinrichs, a top underwater filmmaker, to create the gorgeous and educational conservation film "Mantas Last Dance," which directly helped put manta rays on the endangered list at CITES (Convention for International Trade on Endangered Species) a United Nations delegation that convenes every three years to decide the fate of endangered animals.

I caught up with Mermaid Hannah when she was swimming with manta rays and sharks for another marine conservation film. She surfaced long enough for our interview.

Q: Hannah, you've been a real-life mermaid for 11 years. What else besides Daryl Hannah's film, Splash, inspired you to become a professional mermaid and ocean activist?

Ever since I could remember, mermaids seemed fascinating and romantic to me. The flowing lines of weightless form, the beautiful tail, and long hair -- as a child, I spent hours drawing fantasy artworks. When I saw Splash, my visions turned to reality with Daryl Hannah's perfect portrayal of a mermaid. I realized I could do the same thing.

I made a tail with the help of my mother and swam around for months in it. When I grew up to become an artist, photographer, costume designer, model, and professional mermaid, all my skills and passions combined to give me the talent to create tails and perform underwater successfully.

Even before I was a mermaid I campaigned for the environment. I remember dressing up as a fairy and standing in front of bulldozers who were trying to log old growth forests. So utilizing my "personas" as a way to help the environment is a lifelong ambition.

Q: Why do you think mermaids are rising up again so much in our popular medias, books, and films?

Mermaids are positive female role models and they are passionate about conserving our oceans. Mermaids are alluring, yet independent. Mysterious yet vulnerable, sexual -- yet with no visible sexual organs. I think young girls especially identify with mermaids because they exemplify eternal youthfulness and a symbol of freedom inherent in the energy of the oceans.

Can mermaiding actually be a career? Business Week reported on the first international mermaid convention in 2011 and profiled you.

It's unbelievable how fast this subculture is growing. When I started performing as a mermaid, there were no other freelance professional mermaids in the world. No one had figured out that it could be a career path. Now that people have seen what I've achieved, there are thousands of girls around the world with their own tails, but only about a dozen working as professional mermaids with a sustainable career.

What training does it take to become a professional mermaid?

To be able to create convincing mermaid photos and footage you need to have a very strong ability to hold your breath and develop extremely strong swimming skills. After all, with your legs bound together, you must still look comfortable and beautiful underwater. You have to be dive-certified, not afraid of marine wildlife, have ocean experience in tides, currents, waves, and varying temperature. Remember, you're swimming with your eyes open underwater without goggles. This all takes a lot of expert athletic and modeling experience. Add to all these graces, you are always in public and need to be outgoing, personable, friendly, confident -- unafraid of looking like a freak!

Q: You've swum with sharks, humpback whales, dolphins, and manta rays in your mermaid tail flukes. What have you learned from sharks?

Swimming with whales, dolphins and non-threatening ocean animals gives me great pleasure to experience the joy that these creatures evoke in us. Swimming with more dangerous creatures like the great whites, certainly requires more courage. But I've witnessed sharks diminishing so terribly -- sickened from our pollution, hunted, and fished into extinction. It breaks my heart. I decided to create beautiful images of the connection possible between humans and ocean creatures to inspire people around the world to protect and love them.

Tell us about your courageous attempt in Taiji, Japan to stop their dolphin hunt that is portrayed in the Oscar-winning documentary film, The Cove?

I helped organize and participated with the surfers who paddled out into the bloody waters of the Taiji cove where dolphins were being slaughtered. The fishermen there were very angry at their violent hunt being filmed. They began to attack us with long fishing sticks, and push their boat propellers towards our legs. We held our protective circle for 20 minutes while the remaining live dolphins whistled in panic and spy-hopped. The dolphins made eye contact and swam towards us -- as if they knew we were there to help. But we couldn't free any of them, because the fishermen had roped off the cove. Eventually, we had to leave. All of the dolphins were slaughtered. This goes on for six months of every year. While we were able to bring the footage to the rest of the world and raise awareness, we're still campaigning to end this senseless killing.

Q: I think of you as an ambassador from The Deep, an ocean world that is still more of a mystery to us than outer space. As a diplomat from our underwater universe, what is the most important message you'd like to share with us?

We are at a crisis point with our oceans right now. scientific studies are telling us that if we don't radically change the way we are treating the ocean, its ecosystem will fail in the next 10-20 years. No Ocean -- no life on planet Earth. The ocean is calling out to humans to make a shift; the mermaid is a symbol of the land and the primal ocean reuniting again as one.