Dolphins can stay constantly alert for more than two weeks by sleeping with only half of their brains, researchers say.

These findings suggest how dolphins can keep on the constant lookout for sharks, investigators added.

Unlike land mammals, dolphins sleep with only part of their brains at any time, past research has suggested. Half of their brains rest, while the other half remains "awake," and dolphins regularly switch which side is active.

"After being awake for many hours or days, humans and other animals are forced to stop all activity and sleep," said researcher Brian Branstetter, a marine biologist at the National Marine Mammal Foundation in San Diego. "Dolphins do not have this restriction, and if they did, they would probably drown or become easy prey."

To see just how mindful dolphins are with just half a brain, researchers tested their ability to scan the environment. Dolphins use echolocation to map the world, a biological form of sonar where they emit clicks and listen for their echoes to probe murky, dark surroundings. [Sleep Tight! Snoozing Animals Gallery]

The researchers set up a portable floating pen outfitted with eight modules, each consisting of an underwater sound projector and microphone. When a dolphin scanned any of these modules using echolocation clicks, they could respond with sounds mimicking echoes of those clicks from remote surfaces. Essentially, these modules could behave as "phantom targets" — illusions that acoustically simulated physical objects. 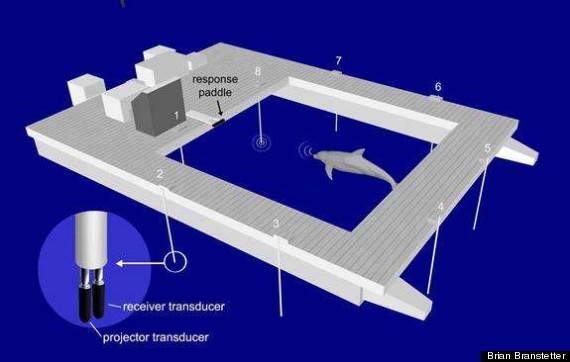 Dolphins were tested using underwater sound projectors. When they detected certain sounds, the dolphins had to press a paddle. The results are detailed online Oct. 17 in the journal PLoS ONE.

The scientists had two dolphins — a female, Say, and a male, Nay — continuously scan these modules. If they detected phantom targets, they were trained over the course of a year to press a paddle to get fish. The dolphin Say often gave victory squeals whenever she succeeded.

The scientists found these dolphins could successfully use echolocation with near-perfect accuracy and no sign of deteriorating performance for up to 15 days. The researchers did not test how much longer the dolphins could have continued.

"Dolphins can continue to swim and think for days without rest or sleep, possibly indefinitely," Branstetter told LiveScience.

These findings suggest that dolphins evolved to sleep with only half their brains not only to keep from drowning, but also to remain vigilant.

"These majestic beasts are true unwavering sentinels of the sea," Branstetter said.

Future research can help verify whether the dolphins stayed awake and alert for multiple days by sleeping with half their brains. This would require monitoring their brains for electrical activity via electroencephalogram, or a EEG.

"Research with freely moving humans who wear portable EEG equipment has been conducted; training a dolphin to wear a similar portable EEG backpack that is capable of withstanding and functioning in an ocean environment presents much greater challenges," Branstetter said. "However, these hurdles are not insurmountable. Also, we are interested in investigating if dolphins can perform more complex cognitive tasks without rest, like problem-solving or understanding an artificial language."

The scientists detailed their findings online Oct. 17 in the journal PLoS ONE.