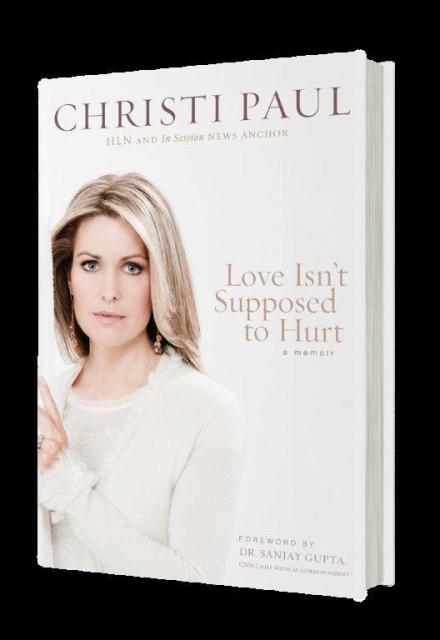 It is a startling fact that one in four women in the United States will experience domestic violence during her lifetime. Even more startling is that domestic violence can happen to anyone, regardless of gender, race, ethnicity, sexual orientation, income, or other factors.

As an admired and respected news anchor on HLN and truTV's In Session, Christi Paul has covered many tragic stories involving domestic violence. Yet, in her new memoir, Love Isn't Supposed to Hurt, Christi opens up to share her deeply personal and inspiring journey as a survivor of an emotionally abusive marriage.

According to the National Domestic Violence Hotline, domestic violence is not only limited to physical abuse.

Domestic violence can be defined as a pattern of behavior in any relationship that is used to gain or maintain power and control over an intimate partner. Abuse is physical, sexual, emotional, economic or psychological threats or actions that influence another person. This includes any behaviors that frighten, intimidate, terrorize, manipulate, hurt, humiliate, blame, injure or wound someone.

Now happily remarried with three daughters, Christi Paul's empowering book chronicles how she developed the strength to break the cycle of abuse through her faith in God, unconventional forms of therapy and the support of family and friends. Christi also provides readers with essential information on resources and organizations where victims of abuse can seek the help they deserve.

With a stirring foreword by CNN Chief Medical Correspondent Dr. Sanjay Gupta, Love Isn't Supposed to Hurt forces a much needed dialogue about this pressing social issue. Most importantly, it demonstrates that while no one is immune to domestic abuse, there is support and hope for its victims.

MS: Why did you want to write this book and share your story so publicly?

CP: We do so many stories on children who are hurt by stepparents or boyfriends of single moms and I remember coming home one night being really upset by the Baby Grace story out of Texas and thinking, "This mother stood there and watched her husband beat her child to death." You would have to kill me to get to my kids and I think most parents feel that way. It really made me think that this woman must have been in such a bad place in her life that she allowed somebody to do that to her child.

I thought, "We need, as women and just as people in general, to do more lifting up. If we can do that, then we can protect children from being in these kinds of situations because we will be too strong to let somebody in our life who should not be there."

I also thought of my kids. [Domestic abuse] is such a prevalent issue now. I thought, "I am going to write this for my kids so if they are ever in that situation, I can hand them the book and they will know that I have been there, that I am always here for them and will help them on a very real level."

It was really hard to share [my story] with the public because I knew that I was also opening myself up to criticism, but I knew that there are people now living what I was living then.

MS: How did your faith and beliefs about marriage keep you in an abusive relationship and then help you leave it?

CP: My faith kept me there because I married him, so marriage was sacred to me. I wanted to stay true to my commitment and that is truly the biggest reason I stayed and also because I still believed in him. I think there are good parts of that man. I would see glimpses of those good parts and I would hold on for dear life.

My faith helped me leave because I could feel that I was not being who I was supposed to be. I just had no self worth. I had no belief that things could change; no hope whatsoever.

I think God will tell you what to do. That's what happened to me. I knew I had to go.

MS: What do you want readers to understand about the severity of verbal and psychological abuse?

CP: [Verbal and psychological abuse] is like bullying at home. Some people go to school and they get bullied. Well, I was going home and I was getting bullied. We see what bullying does to kids. That is what it is doing to people in their homes. It's the same thing. It breaks you down to be somebody that you were never meant to be, to walk in fear, to walk in shame and to walk in anger and resentment and none of us were meant for that. It needs to be understood.

Even if you are angry and you have reason to be angry, that doesn't give you license to be cruel. We have to take responsibility for ourselves and the way we act.

We have people who are walking around who are hiding these horrible emotions that they are feeling about themselves because they are absorbing the words that were used against them and they are starting to define themselves by that. If you tell somebody enough, "You're stupid, you're not worth it, you can't do this, you can't do that," then how many times do you have to hear that before you believe it? The power of words is immeasurable.

MS: What role, if any, do you think government as well as religious and civic organizations can play in addressing the problem of domestic abuse?

CP: First and foremost, people who are in abusive situations need to know that they have someplace to go whether it is someplace physically to go or someplace emotionally to go. Whether it is the federal government's responsibility to give us that, I do not know.

We need to form some organizations that will help educate people on where they can go and what kind of help they can receive. We need to shore up, from a legal standpoint, the rights of people who have been hurt and their right to be protected and to be heard. We need to have a national dialogue that will help people understand that this is such a serious issue and that people don't come forward and talk about it because they are fearful of the repercussions.

I just got appointed to the National Advisory Counsel of the One Love Foundation in honor of Yeardley Love. We are going to try to figure out how we can reach these college kids. This is something that I hear from people all the time where they say, "I didn't know I had a right to leave." People don't understand their rights because they're so beaten down, they don't think they have any.

I would just hope that there are churches and there are groups that when you go to them, they can embrace you and educate you on your rights because people just don't realize that what is happening to them is wrong. On an innate level, they know it is wrong, they just don't always know that they have a right to do something about it.

MS: What factors do you credit for helping you move from a very dark period in your life to a place now filled with so much personal happiness and professional success?

CP: I totally credit [my therapist] Dr. Amelia Case. All the therapy I went through was monumental. I never could have done this without her. To sit down and fully examine why I felt the way I felt and not to say, "It's his fault or this person's fault;" to recognize that this isn't about blame, this is about understanding.

The other thing that I hear from people all the time is, "I am so afraid I am going to go out there and make the same decisions and I am going to let these people in my life."

I tell them, "I promise you, if you reach that point where you are not afraid to figure out who you are, what you want and what your values are, you will not fear that anymore. You will not do it, you will be smarter."

When I left, as weak as I felt at times, I felt stronger than I had ever been because I thought, "I just lived through four years of that. I can deal with anything. Bring it on."

MS: How do you envision using your position as a national media figure to raise awareness about domestic abuse?

CP: Getting involved with the One Love Foundation is one thing. By supporting organizations that fight the good fight and that I believe in like Men Stopping Violence in Atlanta; a phenomenal organization.

I want to be an example of survival. Not just survival, but of thriving. I want people to look at me and this story and say, "If she can do it, I can do it."

I'm not special. I am an example of being able to do it, but that should inspire and motivate you and hopefully give you confidence to know that you can do it too.