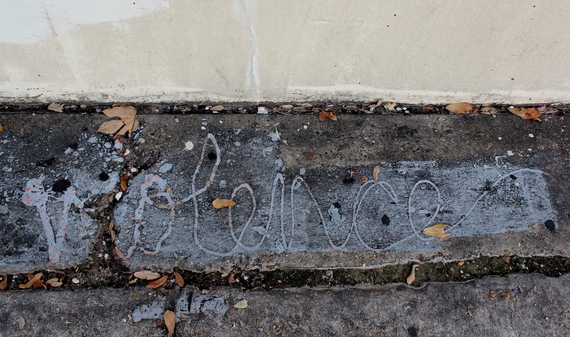 Detroit-based Dago Joe's food truck owner Joe Sciamanna recently justified naming his mozzarella cheese sticks "battered, like your wife" by saying it was a joke. It is not one. During my career as a clinical social worker, I have seen domestic violence across all demographics and communities and have witnessed how it severely impacts people's ability to function daily, feel safe in the world, and connect with others.

Sciamanna framing domestic violence this way shows how normal it is in our society, but also how much it is framed as a "women's issue." Yes, women are disproportionately affected. The National Intimate Partner and Sexual Violence Survey 2010 Summary Report states that nearly 3 in 10 women (28.8 percent) in the U.S. have experienced rape, physical violence and/or stalking by a partner. The World Health Organization "Violence Against Women" Fact Sheet states, "Intimate partner and sexual violence are mostly perpetrated by men against women."

But domestic violence is really an "everyone's issue." Not only because men can be victims of domestic violence too, but also because men are the primary perpetrators. In Jackson Katz's 2012 TED talk "Violence against women -- it's a men's issue", he makes the point that domestic violence is tied to definitions of manhood. He suggests that it occurs as a reaction to the dominant male status quo. Men start receiving the messages "be a man" and "man up" when they are young boys. It is a distressing statement of manhood that some men hurt others or make offensive remarks to prove how tough they are.

In the new documentary "The Mask You Live In" by The Representation Project, Dr. Niobe Way, a NYU Professor of Applied Psychology, spoke about the pressures on boys to buy into a culture that devalues what is feminized: caring, relationships, empathy. When educator Ashanti Branch asked a group of boys in the film to share what they don't let people see, almost 90 percent said pain and anger. The pain and anger turns into violence towards themselves or others, like their intimate partners. It is unfortunate that men can feel like they have to choose between being a man before being a human being.

Additionally, Psychiatrist Dr. James Gilligan noted in the film that on the extreme end, compared to women, men are more likely to resort to suicide or homicide when they feel shamed or humiliated or to try to prove they are "real men." Four times as many men as women die from suicide, while every day, three women die due to domestic violence by a current or former male partner. When you consider the latter, that is a staggering number of women sacrificed at the hands of American definitions of masculine power and control.

Of course there may be other contributing factors for men's abuse. For example, the World Health Organization reports that men who were victims of child maltreatment are three to four times more likely to perpetrate intimate partner violence. Many of the men I have worked with who abused their partners and/or children were abused, neglected, and/or witnessed domestic violence as children. I believe that their abusive histories coupled with culturally derived male conditioning and limited personal resources can create the perfect storm for domestic violence to unfold.

It is crucial to address abuse and our societal definition of masculinity. Therapy allows a judgment-free and safe space where boys and men can fully be themselves, learning to drop false pretenses and imposed definitions of who they should be. They need to be able to work through insecurities and negative internalized messages. Through therapy, they can find understanding and meaning of the violence directed at them, witnessed between others, and/or perpetuated by them onto others. This process gives them the power to choose what they want to believe about their experiences, relationships, and identity. It gives them permission to have empathy for themselves and others.

But this issue goes beyond therapy because it is multifaceted and requires diverse approaches. Wherever they are in life, boys and men need to be able to have the opportunity to look at their mistakes and traumas without being failures and shamed for them. They need to know they can be positive and loving humans. For them to thrive and have fulfilling lives, they need encouragement to believe in their capacity to learn, grow, and overcome those experiences.

Also, instead of creating media and advertising that tells boys and men to "man up" and "be tough," and personally conveying those messages to them, we need to nurture their human spirit. We need to foster their capacity to express their emotions, to have healthy control, and develop their confidence through finding strength and courage in challenges. By doing these things, we can allow boys and men to evolve into their best selves and reduce the chance they will hurt others, or themselves.

Right now, domestic violence is an "everyone's issue," but let's work together to make it "no one's issue."