As we should know by now, domestic violence is a crime that afflicts all communities, be them rich or poor, black or white, and regardless of their faith background. Still, the Muslim community in America suffers disproportionately. Or so many Muslims in New York believe. If a Jew or Christian commits domestic violence, will the media report it as a religious act? And this is one reason why, when domestic violence occurs between Muslims, there is increasingly strong condemnation by their leadership.

The most recent example is the tragic death of Aasiya Zubair Hassan of Orchard Park, who was apparently beheaded by her husband. The high profile Muslim couple co-founded Bridges TV, a channel dedicated to promoting a positive public face of Islam.

The response was immediate. Of course Muslim women activists such as Robina Niaz of Turning Point for Women and Families and the organization Peaceful Families Project condemned the murder, and continue their cutting edge work.

But others, from less expected quarters, were already in action.

Shaykh T.A. Bashir, the founder of House of Peace advocated for Imams to dedicate their Friday Sermon, Khutpa to this issue. Shaykh Bashir is a tall, strong, and at times very vocal African American Muslim. His specialty is educating Imams about the danger of domestic violence. He counsels them man to man and Muslim to Muslim in a way that, let's face it, most women activists are unable to do.

As Sally MacNichol of CONNECT, a domestic violence organization that partners with House of Peace put it, "Bashir works within the Muslim communities in ways that we can't. It's amazing to see the quiet effect of his persistence over time. God bless him."

Shaykh Bashir's call was heeded by many. Imam Sulaimane Konate of Masjid Al-Aqsa (an African Mosque), spoke about the importance of treating one's wife properly. Khonate deals with as many as twenty incidents a week, and is closely counseled by Shaykhh Bashir.

Imam Shamsi Ali, an Indonesian Muslim who represents both the Islamic Cultural Center, and the Jamaica Muslim Center, in Queens (a primarily South Asian mosque) argued that domestic violence is a community problem, not a private issue. "It is related to everyone. That is why we have to talk about it." He also clarified several Hadith, or sayings of the prophet, that are often misinterpreted to hide domestic violence. "There is a saying of the Prophet... where he says to keep family life secrete. But he didn't mean abuses. Abuses must be reported."

Imam Talib Abdur-Rashid had already planned a Khutba on domestic violence when he heard that others were engaged. "We've been doing this for years." He said, about his work as the senior Imam at the Mosque of Islamic Brotherhood. "Every Friday we speak about social and spiritual issues. Sometimes it's poverty, sometimes it's Gaza, sometimes it's violence in the family."

Imam Talib is acutely aware of how the domestic violence perpetrated by Muslims makes Islam look bad- even though it is against Islamic law. "How are we going to spread the word about our community and work, if we let these things happen?" he asked his community. "Domestic violence is a sin." He says. "The Prophet... spoke about this in his last sermon."

"Domestic violence is an illness," said Abdus-Salaam Musa, a long time partner of Shykh Bashir. "It seems like a private affair, but it affects our community and then the rest of the community." Musa personally contacted Muslim chaplains throughout the New York prison system, to "help brothers understand for when they came out."

Shaykh Bashir concurs. He does not think domestic violence is more of a problem in his community than in others, yet Muslims have been under unique strain. "Ever since 9/11 the problems of family violence get neglected." 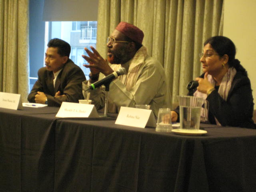 Sally MacNicol of CONNECT met Shaykh Bashir years ago, and has worked closely with him ever since. Bashir has attended almost every course at CONNECT's training institute. His chosen strategy can be treacherous. He works with men who have abused their intimate partners, and for many specialists this is an anathema. He also works with Imams, who are often ill equipped to deal with this problem.

Indeed, when the Interfaith Center of New York held its biannual Marshal Meyer Retreat on domestic violence, in which eighty religious leaders and secular activists met, tensions were evident. Leaders see it as their job to teach the faith, protect individuals from harm, keep families and community together, and promote a good image of their community. Navigation is precarious.

Why else are Imams so important? MacNicol explains. "CONNECT's community research shows that a majority of women dealing with abusive partners prefer to seek help from family, friends, and particularly their religious leader. They are not going to seek traditional DV services, and who (in these communities) wants to go to the police?"

Shaykh Bashir grew up in Brownsville, Brooklyn. After a stint in Vietnam as a sharpshooter, he returned home to study psychology. From the beginning he knew that violence was the result of systemic social problems. Domestic violence was both a result and cause of much of it. But where were men who could work with the male proponents of this vicious cycle? He has become his own answer.

"He's a bit of alone ranger out there," MacNicol says. "But he never lets (domestic violence) drop off the radar screen. He works with many Imams. He respects and understands them."

Indeed Shaykh Bashir is in many ways conservative and religious by western liberal standards. MacNicol herself is a feminist liberation theologian. She is unabashedly radical and progressive. "We don't agree on everything." She continues. "But he is vital for our work. He does not let the leaders off the hook." Matthew Weiner is the program director at the Interfaith Center of New York. He is writing a book about interfaith and civil society.