LOS ANGELES -- Over a hundred domestic workers and their supporters banged on pots and pans in front of the state building in downtown LA Thursday to demand many of the labor rights that other American workers enjoy.

The workers gathered in support of Assemblyman Tom Ammiano's (D-San Francisco) re-introduction of a domestic workers bill, AB 241. If it passes, it would make California the second state in the U.S., after New York, to extend to domestic workers such basic labor protections as overtime and meal breaks.

"We don't have sick days or the right to cook our own food or to be able to sleep eight hours. Sometimes we show up to work and our employers say, 'Oh, we don't need you today,'" said Andrea Guadarrama, a housekeeper and former nanny in Los Angeles. "For those of us with our own children, that's really hard."

The campaign to extend these rights was defeated last year when Gov. Jerry Brown vetoed Ammiano's first domestic workers bill, AB 889, after it passed both houses. This time, the legislator's revised bill attempts to address the concerns of Brown and other business groups, which worry the proposed law would unreasonably burden low-income, elderly or disabled individuals who need around-the-clock care.

While the bill's language is still being drafted, Ammiano's office said it is focused on ensuring six rights for domestic workers: 1) overtime; 2) meal and rest breaks; 3) three paid sick days; 4) workers' compensation; 5) the right to use kitchen facilities; and 6) the right to have some hours for sleep (eight hours recommended, with some possible exceptions). The previous bill also included cost of living increases, 30 days notice of termination and Cal OSHA protections, all of which have been omitted from the current version.

The new bill does include exemptions for low-income employers who may not be able to afford all the new requirements. One such exemption allows employers who need 24-hour care to give employees "on-duty" breaks, during which the employee can rest or eat a meal while still watching the employer. Employees can also agree in a signed contract that they won't be paid while they're sleeping, but only in the event that they are awoken for work.

Without legislative action, Ammiano said, these workers are vulnerable to exploitation, particularly because they are isolated in someone else's home. "You're basically sequestered. There's no recourse if you're being abused, there's no place to go," he said. "If you're being asked to stay and cheat your own family out of your presence, you're afraid of losing your job if you don't."

And the issue is a national one. "Our entire economy is based on these folks taking care of our loved ones so that the rest of us can go to work every day," said Dalia Rubiano Yedidia, field organizer with California Domestic Workers Coalition. "They take care of our kids, but we make it very difficult for them to take care of their own children."

About 67 percent of live-in workers are paid below the state minimum wage, and the median hourly wage of these workers is $6.15, according to a 2012 study by the National Domestic Workers Alliance and Center for Urban Economic Development at the University of Illinois at Chicago.

Only 4 percent receive employer-provided insurance, and consequently 65 percent do not have health insurance. Making matters worse, more than 85 percent of workers said they encountered problems with their working conditions in the prior year but did not complain because they were afraid they would lose their job or their immigration status would be used against them, according the study.

In California, almost 70 percent of domestic workers are Latina, and an overwhelming 93 percent are women, according to the 2006-2008 American Community Survey. "These women are the last group that's still left out of labor law," Ammiano said.

The effort to extend labor rights has been gaining national support, as a domestic workers bill was recently re-introduced in Illinois, and campaigns for such bills are taking hold in Massachusetts and other states.

The California Domestic Workers' Coalition has promised monthly actions until Ammiano's new bill is approved. "We are putting pressure, and we are saying loudly, 'We exist.' Even if they don’t want to see us, we are an integral part of this country," Guadarrama said.

"Those of us who are nannies, we care for the employer's children as if they were our own," she said. "With that love that we have, won't you please recognize us as human beings who deserve rights?"

Photos of the protest in downtown LA in front of the state building:
Photo credit: UCLA Labor Center & CHIRLA 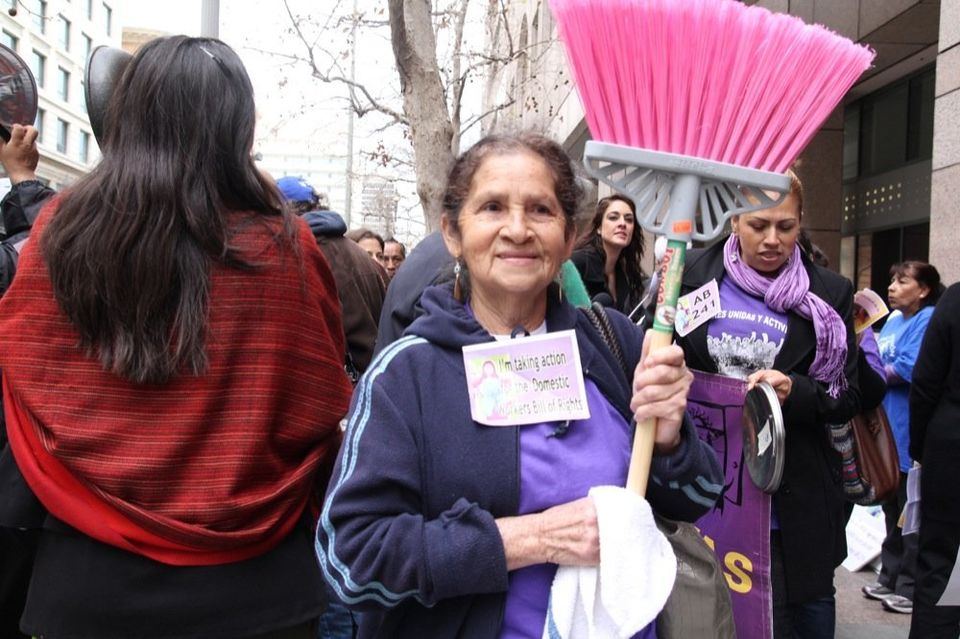