High school graduation should be a time of optimism, family, and hope for the future. But one Michigan school has turned it into a time for controversy and backwards thinking. The Sacred Heart Academy's high school in Mount Pleasant, Mich. has decided to rescind its invitation to their graduation keynote speaker, the older brother of one of the graduates and an alumnus of the school. Why did they decide to not include this young man with strong ties to the private Catholic academy?

Because they found out he is gay. 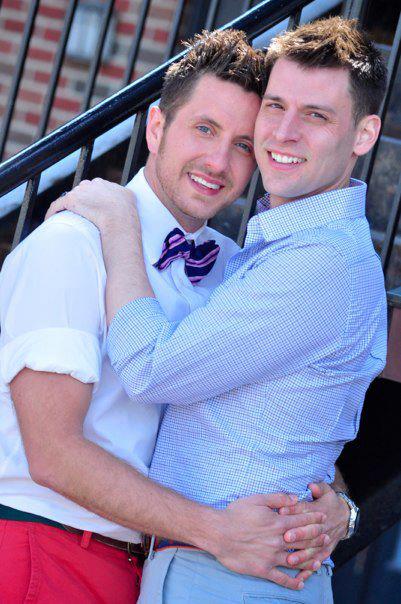 Dominic Sheahan-Stahl was approached by the Sacred Heart Academy back in the fall to give the keynote address at the high school graduation on May 20. Sheahan-Stahl, a 1998 Sacred Heart graduate himself, says he was thrilled to be asked, because his youngest brother was graduating. But that excitement quickly turned to outrage when Principal Denny Starnes contacted Sheahan-Stahl's mother with a shocking message: he would not be allowed to speak at graduation. The school apparently learned about Sheahan-Stahl's sexual orientation after reading on Facebook about his engagement to his partner, Nathan. Starnes told Sheahan-Stahl's mother that due to the fact that he was gay and "had a picture and a status on Facebook that says so" (referring to engagement pictures and announcements), he was no longer welcome to speak.

"My mother kept asking why and what does his sexual orientation have to do with giving a graduation speech," Sheahan-Stahl says. "She cried and didn't sleep at all that night. My poor brother, whose graduation it is, couldn't even be in the room when my mom had to tell me. Even my sister cried herself to sleep that night."

Sheahan-Stahl says he was personally shocked and hurt by the move, especially considering his speech had nothing to do with gay rights or issues but was about family and the bright future of the graduates.

"My speech was about putting faith over fear," he says of the his speech's content, "I wanted the students at Sacred Heart Academy to know that life should be lived with the goal of achieving their dreams, and knowing that fear is something created in ourselves and can be the biggest setback."

Sheahan-Stahl made a video describing the experience and challenging the message Sacred Heart was sending:

Even more surprising, and perhaps more telling, is that this move to keep a gay person from even speaking at their school came a day after the same principal delivered an anti-bullying speech to the student body. The hypocrisy of the move to call for greater tolerance of differences while at the same time rejecting a speaker, family member, and alumnus who happened to be gay wasn't lost on Sheahan-Stahl.

"It scares the crap out of me," he says of the message it sends to young people, especially LGBT students. "My mom has always taught us to love unconditionally. I am lucky that at 32 this is the first time I've truly been discriminated against, but some kids go through this day in and day out. I want those kids to know that they are loved and that the world needs what they have to give."

This incident also comes on the heels of a recent visit from a Catholic bishop who gave a speech to the school seniors. The students asked the bishop about the church's stance on homosexuality, challenging the hostility the church has shown to LGBT people. While the bishop's responses about church doctrine on gay people wasn't surprising, the exchange caused a disturbance in the meeting, with some students even walking out on the Bishop.

The school is already facing heat for its decision to bar a speaker based solely on his sexual orientation. Local papers like Central Michigan's Morning Sun are reporting on the story, pointing out that the school's website was down on Thursday morning. A Facebook page called "Let Dominic Speak" has already been created, and Twitter has been spreading the young man's video like wildfire.

As of now, the school and its administration has remained quiet on the issue, despite repeated attempts to contact them. Administrators say they are looking into the issue and will issue a statement at some point in the future.

As for Dominic Sheahan-Stahl, he is disappointed in the school's reaction:

I've talked with the principal and told him I forgive him. Principal Starnes said he was very sorry and feels it's the biggest mistake of his life. He let fear of backlash take over. I just wished he would have initially taken the high road and just let me speak at my brother's graduation. I just never want this to happen again to anyone.

The open hostility of the Sacred Heart toward even allowing a gay person to speak at their school's graduation is shocking, especially given that the objection wasn't to the speech's content or message but just to the very fact that Sheahan-Stahl is an openly gay man. Trying to deny the very existence of LGBT people at their school, even family members and alumni just trying to be part of what should be a joyous occasion, is beyond just religious teaching and doctrine.

It's close-mindedness that shows a surprising lack of heart, sacred or otherwise.