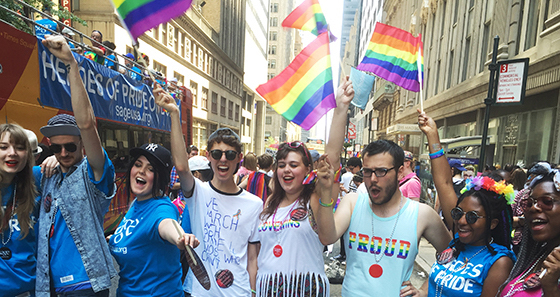 I recently talked with Professor Dominic Shellard, one of the only openly gay Vice Chancellor's of a major university in the United Kingdom. This week a groundbreaking event is going to take place when 1,082 De Montfort University students travel from Leicester in the United Kingdom to New York City from Tuesday January 3rd to Sunday January 8th to boost their global outlook with a mixture of academic, cultural and networking opportunities in the Big Apple. One of the highlights of the trip will occur when they demonstrate against intolerance on January 6th braving the cold for a picnic in Central Park holding banners that state Citizens of the World. Vice Chancellor Shellard is an outspoken critic of anti-immigration rhetoric following the Brexit vote and wants to send the message that universities should be producing students who think globally. Shellard who is a recipient of the Mahatma Gandhi Seva Medal is working with citizens and university staff to counter hate crimes that are on the rise in his community just like they are here in this country since the presidential election of Donald Trump. I talked to Dominic about what he hoped to accomplish with this important peaceful rally event on January 6th and his spin on our LGBTQ issues.

When asked what his personal commitment is to LGBT civil rights Shellard stated:

First of all I've introduced at the university De Montfort University Pride because unfortunately the actual pride festival that we have in our city in Leicester takes place when our students aren't here. It takes place end of August and I always felt our students missed out in engaging with Leicester Pride. So we have our own pride festival which is a series of cultural events, celebrations and talks in February. We always try to invite people who might not be as fortunate as us to enjoy some of the tolerance we're very lucky to have in the U.K. We obviously had our Parliament vote very recently to permit gay marriage and that was a great big moment I think for the U.K. as a country. So last pride we invited 10 members from the LGBT community of Russia who are suffering terrible persecution at the moment. There is tremendous intolerance in Russia as you know for members of our community and our students raised funds to pay for 10, generally people under 25, to come over to Leicester and I think they were here for upward of 2 weeks and they forged strong links with them going forward and I think that is a very important thing. Secondly I'm the honorary president of our local LGBTQ center in Leicester. There are only 5 centers left in the U.K. now which is in itself I think a rather horrifying figure actually. So I'm very pleased to be able to have it be all quite a cursory role but I do what I can to raise the profile at our center.

Professor Dominic Shellard joined De Montfort University (DMU) in June 2010 as vice-chancellor and chief executive. During his tenure DMU has embarked upon a focused journey of improvement. Dominic has led the expansion of the international agenda, most notably with the launch of #DMUglobal in 2013, giving thousands of students an opportunity to travel and study overseas as part of their course.
For More Info: dmu.ac.uk