Dominic Sherwood has appeared in "Charlie and the Chocolate Factory," "Not Fade Away" and "Vampire Academy," but his big break came when Taylor Swift's "Style" video premiered last month. He plays the guy with the James Dean daydream look in his (dual-colored) eyes. What's it like to shoot a Taylor Swift music video, you ask? HuffPost Entertainment went straight to the source: The 25-year-old English actor, who shot the clip across four days last summer in Los Angeles, took us from first text message (from Swift herself, a friend of Sherwood's) through the explosion that flooded his Twitter feed after the video's launch.

How did you first get linked up with the "Style" video?
I’ve known Taylor for a little over a year now. We met through mutual friends. About a month before the video was supposed to start filming, she texted me and asked me if I would ever consider being in a music video. I literally had just finished a movie at the time and I said, “Well, it depends who it was for and what sort of stuff I would be doing.” And she said, “Well, it would be for me.” And I said, “Oh, wow.” I was really, really flattered that she would even think of me and consider me for it. I’d met the director once or twice before, Kyle Newman. It was all very exciting, even before I knew what I was doing exactly.

Was making out with Taylor part of the initial pitch?
You know, what’s interesting is that we didn’t. If you watch the video again, we don’t make out. Trust me, I would know if we’d made out, absolutely. It was something that we spoke about, me and Taylor and Kyle. She wanted to have it more insinuated. Everything is more smoke and mirror-y than directly there on the screen. We actually never make out at any point.

The song is about a James Dean lookalike. Is that how Taylor would describe you?
Taylor said I kind of fit the person they’d like in the video. I think I had a lot of the attributes that she wanted and that she described in her lyrics. And when we met and when we’ve hung out, a lot of the stuff I was wearing, that’s how I dress.

Was "Style" playing on loop as you filmed?
It’s always playing in the background, but it’s interesting because a lot of times it’s played in double speed. Still to this day, I’m not really sure why that happens. I think it might be something to do with slowing it down for the frame rate -- something like that. When I heard it for the first time on the radio, I was like, “It’s a bit slow, isn’t it? A bit different?” And then I realized they play it twice as fast whilst we’re filming.

You're a fit guy anyway, but did you do any prep to get in shape for the shirtless scenes?
I’d just come off the back of a movie called “Take Down” where I had to be quite physically fit. I trained quite hard for that. It was a few months after I’d wrapped “Take Down” that Taylor spoke to me about this. I was kind of out of condition. I hadn’t been working out and she sent me the storyboard and I was like, “Oh God, I’m shirtless in a lot of it. Okay, cool, back to the gym, I guess.” We actually didn’t have all that much time. I think I had about two or three weeks of really working out properly to get back into shape. I worked quite hard. I was in the gym maybe four times a week, five times a week.

Your face is often superimposed on Taylor's clothes or hands or on a mirror. Did you have to film anything special for that?
No, so this was what was so interesting about it: Day 1, we filmed in almost, like, a tent. They filmed my face and my eyes and all of the things you see on Taylor and on her dress and all the mirror stuff. Then for the rest of the shoot, we did it with projections live on set. The mirror stuff is all done in postproduction, but the projections where I’m on her dress or she’s projected onto me, that was all done live on set with a projector. It was great. It was actually nice to see it happening firsthand because a lot of the movies I’ve been on, it’s all done in post. You never actually get to see the product until you go and see the film at the premiere or until you get a screener of it, so it was actually really cool to see it happening live in front of you. 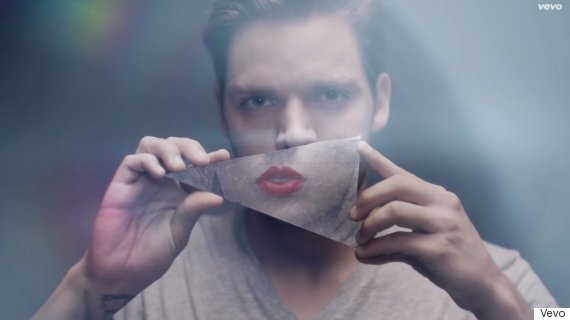 When did you first see the video?
Everyone wanted to keep it quiet. I’d seen little snippets, but I hadn’t seen the entire video until it got released.

What's the response been like? Do you feel like a changed man?
No, no, not at all. My Twitter had a bit of an explosion, which was cool. That’s kind of all it was. It absolutely hasn’t changed me at all. When it came out, I was in the middle of filming a movie anyway, so I was focused on that. I went back to my trailer and my phone had exploded and I was like, “Wow, I guess the video’s been released and that’s why my phone is behaving the way it’s behaving.” We’ve had such a positive response to the video, especially because it is so different from anything Taylor has done before. Taylor and Kyle and her team did an amazing job at kind of reinventing the wheel where she’s really reimagined and elaborated on what she can do as an artist.

Music-video stars are notoriously sex symbol-ish. Your Twitter feed must have been filled with comments about that.
Yeah, there’s a lot of articulation of that, especially my eyes. It’s pretty obvious in the video that my eyes are different colors, and they actually are. That’s how my eyes are. There was a lot of response about my eyes and people questioning whether it was real or whether it was done for the video. They are real. I can tell everyone right now.

It’s like #TheDress.
That’s so interesting -- that’s what me and Taylor were speaking about yesterday. People feel they’re being ocularly tricked by my eyes. But no, they’re actually blue and brown. I’m not trying to trick anyone.

How much have you seen Taylor since shooting?
I actually haven’t seen her since wrapping the video. She’s so busy slowly but surely taking over the world. But we do speak every now and then.

Do you have a favorite Taylor Swift song?
If I said anything other than “Style,” I’d look like a royal idiot, wouldn’t I? I actually like “Blank Space.” We had a bit of a running joke after I did the video because of Sean O'Pry, who is the guy in “Black Space." Every time the video or the song would come on, my friends would turn to me and go, “I’d hate to be the guy in the next video because he’s very good-looking, that Sean guy.” I was like, “Yeah, thanks, you’re great. Thanks for having my back.”