SANTO DOMINGO, Dominican Republic -- At 74, Yampié Calleins' yellowing, muscular hands now tremble when raising something as light as a piece of paper -- the result of a life spent swinging a machete and hoisting cane in this country's sugar fields. After devoting more than four decades of his labor to the Dominican sugar industry, he now draws a modest pension equal to roughly $110 per month. Tomorrow, however, he could lose it.

"I've been here since three in the morning," Calleins told The Huffington Post. "But you've got to do what you can to get the papers." 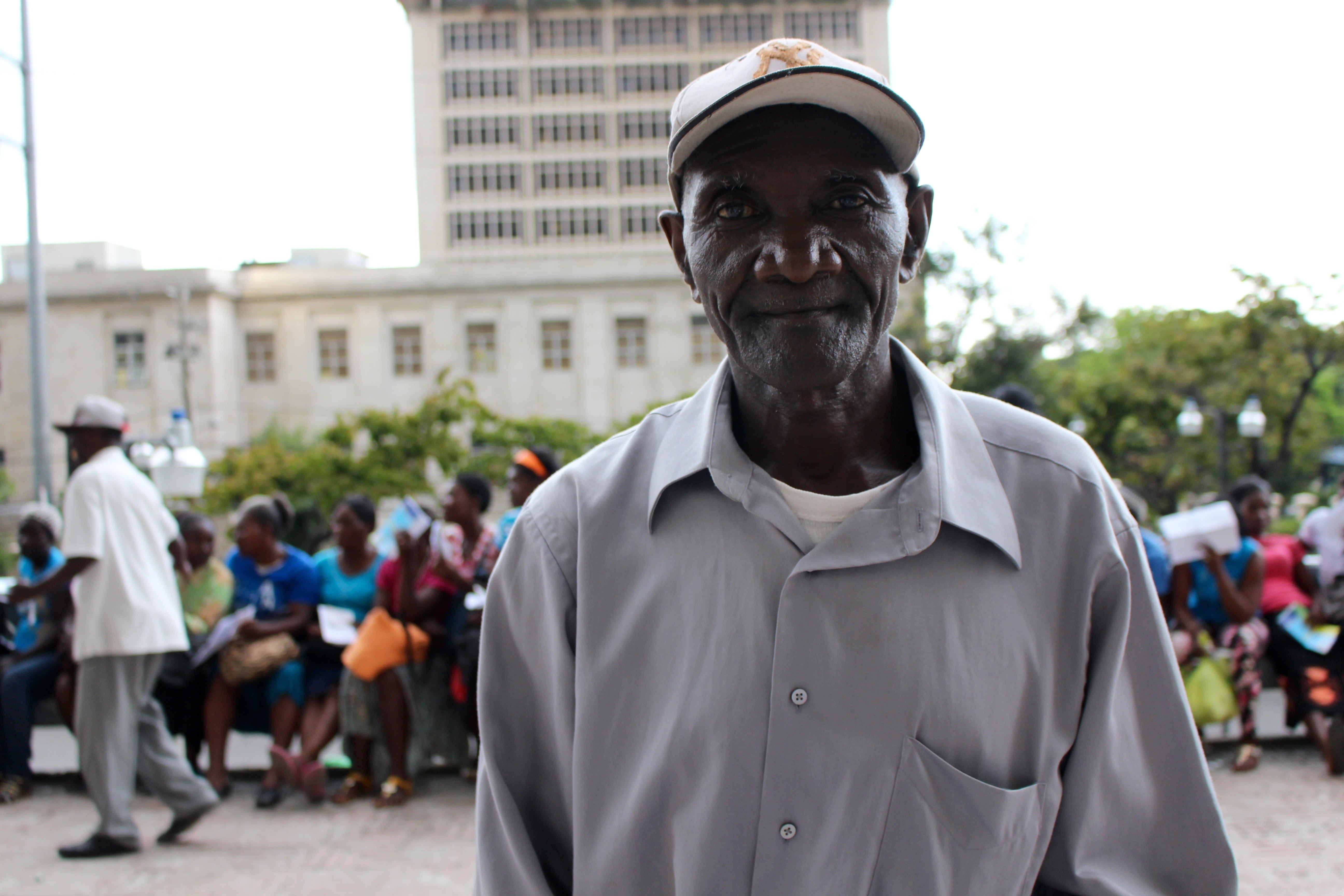 Yampié Calleins stands in front of a line of people waiting to register to normalize their migrant status before Wednesday's deadline in Santo Domingo, Dominican Republic. (Roque Planas/HuffPost)

On Wednesday, Calleins was one of hundreds of people who had queued up since the early morning hours at the central administrative building here -- virtually all of them Haitian-born or -descended, virtually all of them black and virtually all of them facing the threat of deportation in the coming days. At midnight, the deadline to file paperwork with a "Regularization Plan" for the Dominican Republic's estimated 500,000 undocumented immigrants expired, leaving an uncertain future for many on the island who have wrestled with Dominican bureaucracy for a chance to stay in the place they know as home.

In the days leading up to the deadline, Dominican authorities said roughly 210,000 people had applied to normalize their status under the law, which would give applicants two years of legal residency.

A seemingly endless line wound around the towering government building's main floor, spilling down its steps and outside its gates, where increasingly pessimistic throngs of people huddled under the watch of national police officers bearing shields and holding wooden batons. At intervals of 10 to 15 minutes, someone would leave, clutching a small pile of papers, and the line would slide forward, as the applicants barely rose to their feet, instead dragging their pants and skirts across the building's concrete benches.

Several thousand people born in the Dominican Republic to Haitian parents, some of whom have lived in the country for generations and have no ties to neighboring Haiti, will also face the risk of deportation due to a controversial series of laws that culminated in the revocation of citizenship for the children of undocumented Haitians. The idea of birthright citizenship has been controversial for years in the Dominican Republic, which has long had a tense relationship with neighboring Haiti. Migrants from across the border have traveled into the Dominican Republic in large numbers since the early 1900s, driven by the lure of work, often in menial jobs such as cane cutting or domestic service. A 2004 immigration law specified that children born to undocumented immigrants would be excluded from Dominican nationality and urged to move to Haiti, according to the Open Society Foundations.

That standard was enshrined in the 2010 constitution, and a 2013 decision by the Dominican Constitutional Court sparked international criticism by applying the standard retroactively to 1929 and ordering government officials to revoke citizenship from those who no longer qualified.

"It interpreted that those who were born between 1929 and 2010 of undocumented migrants were not Dominican," said Angelita Baeyens, program director for RFK Human Rights. "So even those whose Dominican citizenship had been recognized and had ... Dominican IDs and passports, by this decision, they were being stripped of their nationality."

In response to international outrage, the Dominican government passed a naturalization law in 2013 as a solution to people in limbo. The law distinguished between two groups of now stateless residents: Group A consisted of people who formerly had documents like passports, birth certificates or ID cards, but found them revoked at some point over the last decade or so as the citizenship laws changed. Those in Group B had been born in the country, but never obtained crucial documents needed to prove their citizenship. The law reclassified them as lawful migrants and gave them a pathway to citizenship. 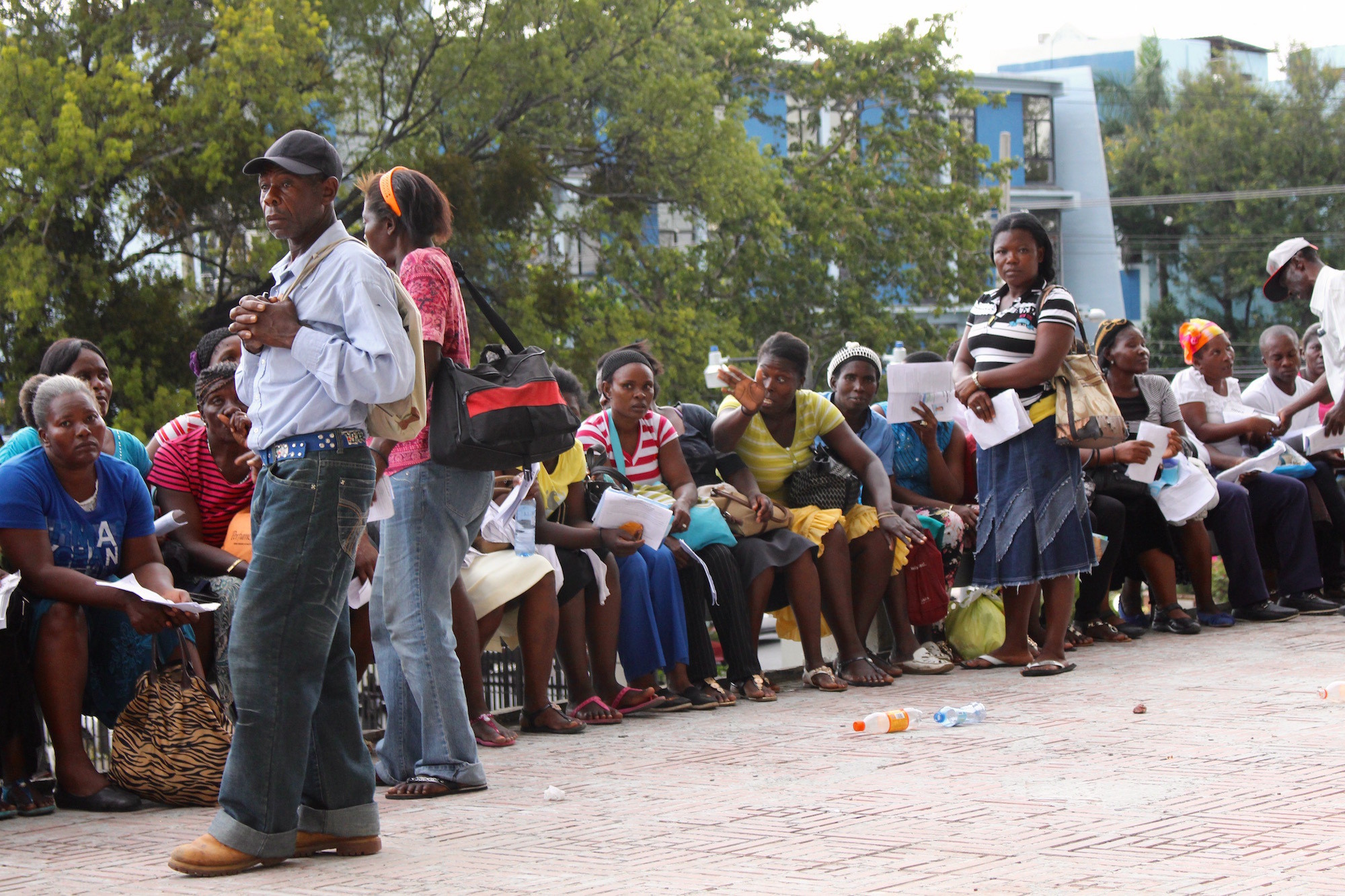 Applicants wait in line for a chance to normalize their immigration status with Dominican authorities before a midnight deadline Wednesday. (Roque Planas/HuffPost)

Estimates of how many Dominicans are in this situation vary widely. Amnesty International and RFK Human Rights place the number around 200,000 people -- the vast majority of them are of Haitian descent. Dominican officials, however, have estimated the figure around 24,000.

By the February deadline to register, however, fewer than 9,000, Dominican-born people had successfully completed the application process. Critics blamed systemic obstacles such as a sketchy registration process, contradictory instructions and an extensive application procedure.

Even as they saw Dominican citizenship slip from their hands, some Dominican-born people hoped to apply for recognition as lawful immigrants under the "Regularization Plan" by Wednesday's deadline.

MacLawson Joseph, 28, is one of them. Though he was born in the Dominican Republic and knows nothing of Haiti, the Dominican government now views him as an undocumented immigrant because his parents are Haitian migrants. Four hours before the deadline approached, he had yet to make it inside the building's gates, even though he had arrived at 3 a.m.

"I'm not leaving," Joseph told HuffPost. "My mother's here. My father's dead. My sister, all my family is here. What am I going to do over there [in Haiti]?"

The vast majority of Haitian-descended Dominicans and Haitian migrants living in the country are black, leading many to believe racism has propelled the desire to expel them.

"There is a deep historical current of racism within the Dominican Republic -- racism directed specifically at Haiti," said Greg Grandin, a professor of Latin American history at New York University. "On the other hand, I think there's a more contingent and immediate cause of the racism in this immediate form."

Government officials, however, have bristled at criticism -- particularly from abroad -- over their handling of the citizenship and immigration issues, arguing that control over immigration is an issue of sovereignty and that the country's weak economy cannot accommodate excess labor. President Danilo Medina's administration says the midnight cutoff will mark a final deadline.

"Those who didn't register with the Regularization Plan, they will be subject to deportation," Vice Minister of the Interior Washington González said Tuesday, according to El Comercio. As the June 17 deadline to register with the government passes, government officials say they plan to resume deportations, which had been largely halted to allow people to finish registering. The military has deployed 2,000 soldiers to help with the process, and government officials have opened four holding centers to take immigrants getting processed for expulsion, according to Reuters. 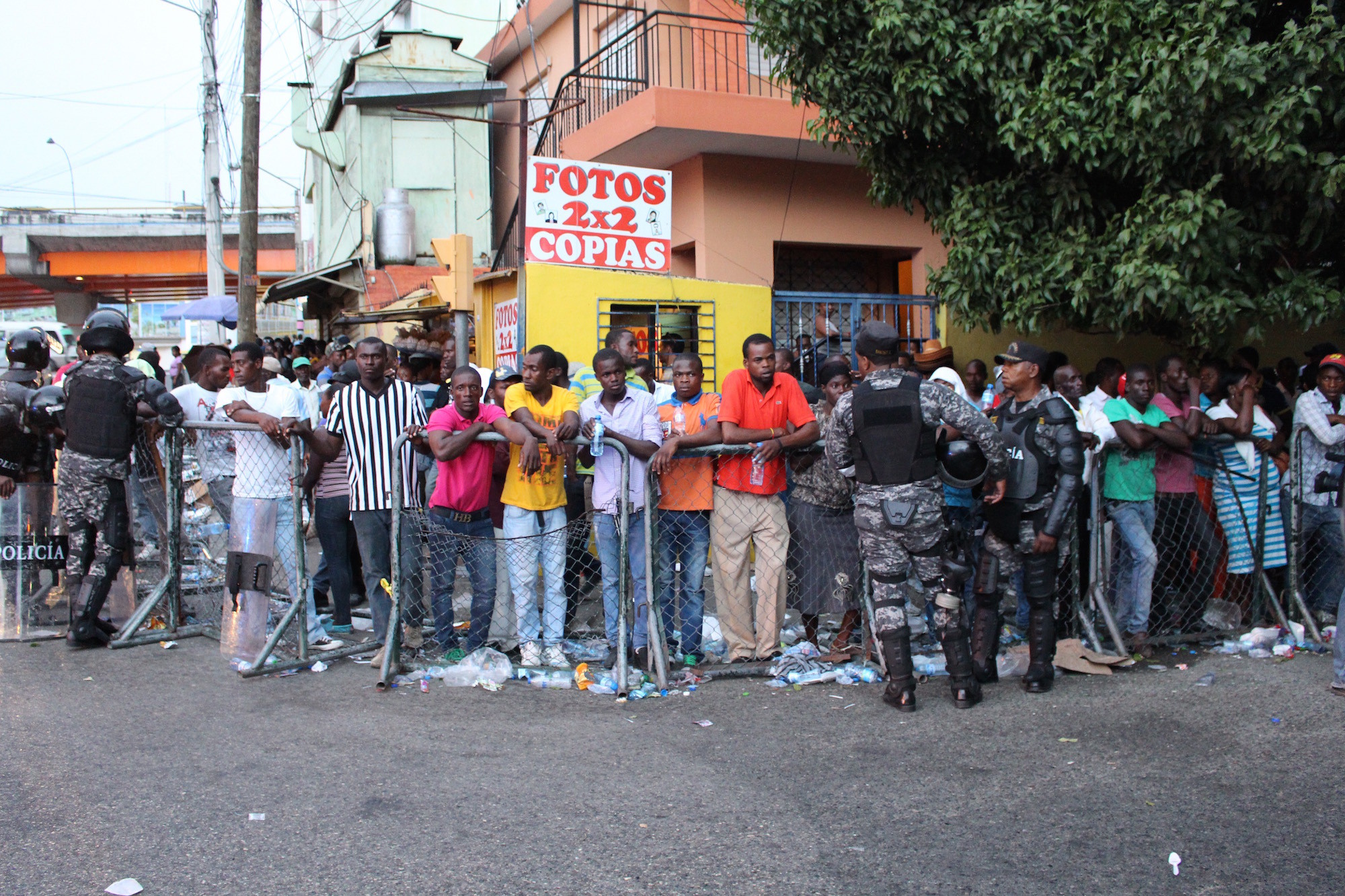 Some applicants hoping to normalize their immigration status had yet to make it through the gates to the outside of the building just hours before the midnight deadline. (Roque Planas/HuffPost)

Government authorities say the deportations will be modest and targeted, but human rights groups like Amnesty International say they're concerned the government will carry out mass deportations of both denationalized Dominicans and undocumented migrants.

Marselha Gonçalves Margerin, Amnesty International's advocacy director for the Americas, said her group is particularly concerned that Dominicans of Haitian descent will be viewed by Dominican officials as indistinguishable from undocumented immigrants more generally and expelled to a country that they never knew.

"Amnesty's concern is that Dominicans of Haitian descent risk being trapped on the deportation scheme and therefore being expelled," Margerin said. "There have been, in the past, a lot of deportations that are done through raids targeting specific communities of Haitian migrants and their descendants." For now, the scale of the deportations and how they will be carried out remains unclear. Typically, the Dominican Republic carries out deportations "administratively," rather than having the courts review individual cases. Critics like Amnesty International say such a streamlined process flies in the face of international standards and make it too difficult to contest erroneous or arbitrary deportations.

"What we expect to have is that some deportation might start to take place [on] Thursday for some people who did not enroll in the regularization plan and for people who enrolled and failed to regularize for different reasons," Robin Guittard, an Amnesty International campaigner for the Caribbean Team, told HuffPost. Guittard says such a system makes it more likely that Dominican citizens could be expelled and left without the ability to enter their own country. "What the situation is in the country at the moment ... is a lot of fear," Guittard said. "These people now have no more options, no more solutions and, with deportation to take place soon, they are very scared to know what's going to happen to them."

This reporting was made possible with a grant from the French-American Foundation.