SANTO DOMINGO, Dominican Republic -- Like most Dominicans, Roque Feliz has skin that, while dark, is not quite what his countrymen would call "black." A heavyset man with full lips and close-cropped gray hair, Feliz says his mother told him never to marry a black woman, even though his father was black.

“‘We have to refine our race,’ she used to tell me,” Feliz said in an interview with The WorldPost.

Feliz, the director of a social justice and education institution called Centro Bonó that has played a key role in advocating for Haitian migrant rights, doesn’t endorse that view. But he stops short of using the word "racist" to describe the society he lives in, and the government that presides over it. Instead, he describes these aspects of Dominican life as the lingering vestiges of a society that once privileged European culture and race above the Dominican Republic’s mixed-race and largely Afro-descended majority.

“In the Dominican Republic, we don’t have racist policies,” Feliz said. “Nevertheless, there are remnants of racist practices, just like in the rest of Latin America.”

Maribel Núñez, who is black, has another way of describing the same phenomenon: “I live in an apartheid state.”

Núñez, an independent journalist and the director of the activist group Afro-Dominican Action, sees the evidence of racism at every level of Dominican society, from the atypically light skin of its presidents to the beauty salons that spend much of their time ironing out hair so it won’t look kinky like hers. Bouncers at clubs sometimes tell black people that there’s no room inside while letting lighter-skinned people through, she says. She feels suspicious eyes following her when she enters upscale stores.

“The oligarchy that runs this country is a white oligarchy,” Núñez told The WorldPost. “There’s a lot of rejection of blackness in this country... It’s a form of self-hatred.”

Views like Feliz's and Núñez's form the contours of an increasingly heated debate about racism, immigration and national origin in the Dominican Republic, amid government plans to resume the deportation of undocumented Haitians, along with an unknown number of Dominican-born people of Haitian descent made stateless by changes to Dominican law over the past decade. 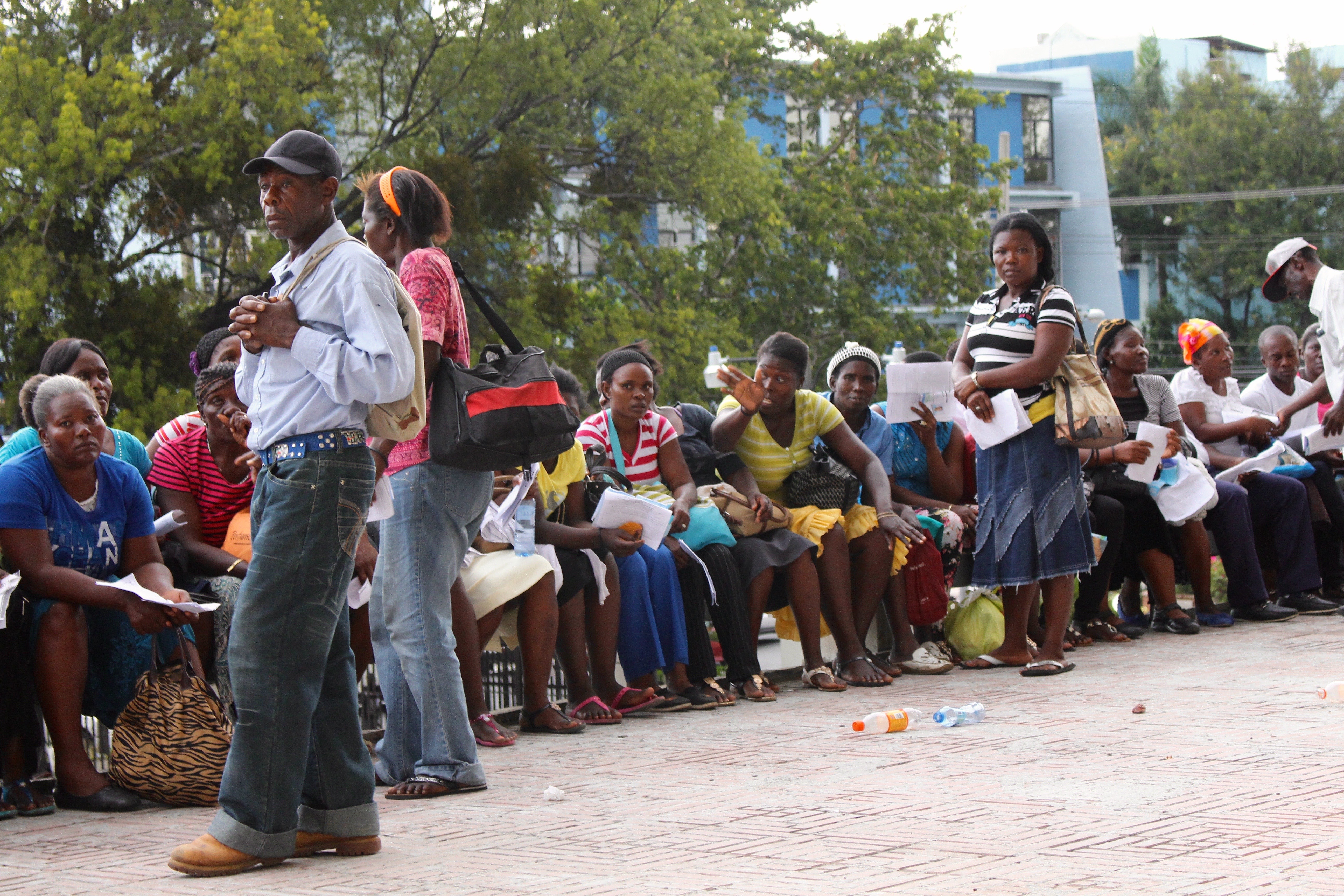 Haitian migrants gather in front of the main administrative building in Santo Domingo on June 17 to register as foreign nationals. (Roque Planas/The WorldPost)

Virtually all Haitian migrants and their descendants in the Dominican Republic are black, fueling widespread suspicion that the planned expulsions are largely rooted in racism. Others downplay the role of race, citing Dominicans’ own mixed-race heritage and a contentious history with their Haitian neighbors that they say better explains the conflict.

Government officials have largely framed the debate in terms of enforcing immigration law, sidestepping discussions of race and the question of whether hostility toward Haitians and their children is driving the crackdown.

But signs exist across the country indicating that some people, at least, support the government’s hard-line stance against undocumented immigrants simply because they resent Haitians themselves.

A nationalist group has burned Haitian flags at protests. Reporters sympathetic to the plight of immigrants and their stateless children have received death threats. In February, as the controversy over a plan to naturalize the children of undocumented Haitians reached a climax, the body of a Haitian man was found hanging in a park in the city of Santiago, apparently the victim of a lynching.

Less extreme signs of racially or nationally motivated anti-Haitian sentiment are also easy to spot. Graffiti stenciled along a main artery in the capital reads, “No more Haitians = more work and less crime.” A widely held conspiracy theory posits that the United States, in concert with France, aims to unify the island under one Haitian-dominated government.

Some see Haitians and Dominicans as fundamentally different types of people. Carlos González, a 25-year-old resident of Santo Domingo who runs a gas-supply company, says that while he has several Haitian friends, he doesn’t fully trust them.

“I’m not racist, I don’t discriminate,” González told The WorldPost. “I have lots of Haitian friends, including undocumented ones whom I’ve helped to get their papers in order. I can go to their homes, spend time with them. But I can’t completely trust them, because you help a Haitian today and he hurts you later. It’s in their blood.”

Others say their animosity toward Haitians is based on politics, not biology -- although their disparaging tone is the same.

Diógenes Núñez’s voice raises sharply as he rails against the administration of Dominican President Danilo Medina. Immigrant rights advocates and human rights groups have vilified Medina for implementing what they say are discriminatory policies against Haitian migrants and their children. Núñez, on the other hand, considers his president a weak leader who “lets himself be bossed around by international NGOs” instead of taking a harder line on immigration. The 64-year-old cab driver says Haitians “want to do whatever they feel like, without paying attention to our laws.”

While the kernels of anti-Haitian sentiment in the Dominican Republic can be traced to the independence movement, historian Robin Derby says the story is more complex. At the time Haiti invaded, the Dominican Republic was a fledgling country where the sugar industry, booming elsewhere, had yet to make a mark. Many Dominicans welcomed the involvement of Haiti, which had a more advanced economy and leaders who embraced Enlightenment ideas. Some of the ways in which Haitian rule shaped Dominican society -- like abolishing slavery -- are still seen as positive today. 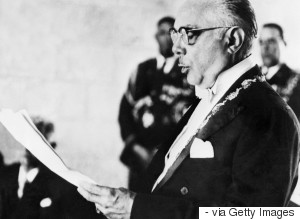 Rafael Leonidas Trujillo, dictator of the Dominican Republic (1930 to 1961), wearing a collar of Dominican-mined gold studded with gems, reads a speech during ceremonies honoring him for his 25 years of service as president, August 1955 in Ciudad Trujillo. (AFP/Getty Images)

Derby views the early 20th century as the point where anti-Haitian sentiment became closely associated with race. In the 1930s, U.S.-trained and -backed Dominican dictator Rafael Trujillo eliminated the option to identify as “black” on a new national identity card, leaving Dominicans no choice but to describe themselves as either “white” or some variety of “Indian” -- meaning "indigenous" -- according to a 1999 article by the historian Samuel Martinez. The move a made little sense for a country where most indigenous people had been killed or died from disease by the close of the 16th century.

The anti-Haitianism of the Trujillo era culminated in a 1937 massacre ordered by his government that left somewhere between 9,000 and 20,000 Haitians dead.

“Anti-Haitianism was an ex post facto rationalization of the massacre,” said Derby, who has interviewed survivors of the massacre along the border. “And it really generalized the idea of Haitians as inferior.”

Danilo Contreras, a postdoctoral fellow who studies race and ethnicity in the Dominican Republic at the College of the Holy Cross in Worcester, Massachusetts, also pinpoints the early 20th century and the era of Trujillo as the time when anti-Haitian sentiment changed fundamentally, becoming “racialized.” In addition to Trujillo's often overtly racist rhetoric, he said, Haitians became closely associated around this time with low-wage labor, especially in the sugar industry, after the U.S. invasions of the Dominican Republic and Haiti in the early 20th century.

Still, Contreras urges people to avoid taking a narrow view when trying to understand the role of race in the conflict over the place of Haitians and their descendants in the Dominican Republic.

“It’s a very complicated issue,” Contreras told The WorldPost. “Nation and race in the Dominican Republic have been intertwined for many years. Oftentimes we get these kind of one-dimensional explanations, in which it’s either all about race or it’s all about nationalism. Anti-Haitianism is about race in some respects, but anti-Haitianism has not always been racialized. And it’s also a classic immigration problem.”