We're not quite sure what to do with this one.

What appears to be a BDSM-themed ad for Domino's new Sriracha pizza is making the rounds on the Internet this week and it features a large tongue tied up and ball-gagged.

Of course we're completely sex positive and supportive of all BDSM-related activities... but we're not convinced this is the best marketing strategy for the pizza delivery giant. 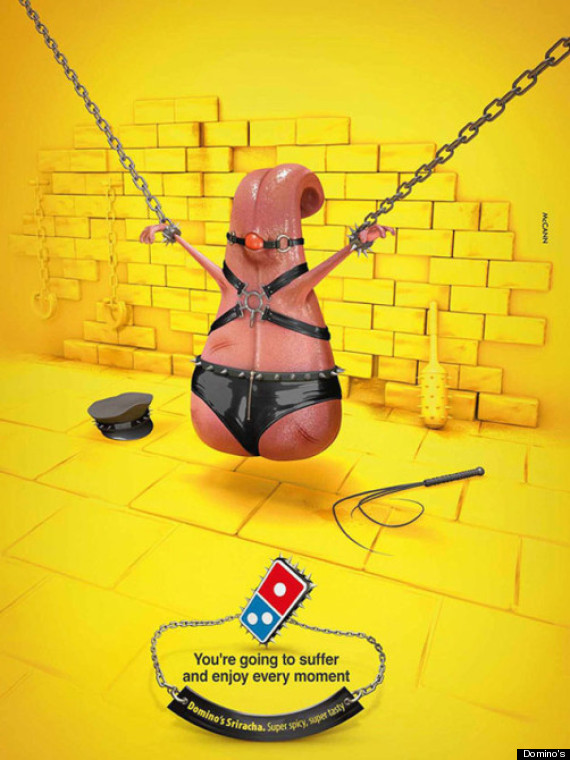 It seems Domino's agrees. Company spokesman Tim McIntyre confirmed to People magazine that the ad is indeed authentic, though it was never officially promoted.

“It’s real,” McIntyre stated. “The ad was created and pitched by an agency to the independent franchise in Israel. It never ‘officially’ appeared anywhere, because it was ill-advised, unfunny and not brand-appropriate. In a word, it was stupid.”

In fact, McIntyre thought that the ad was a joke when he first encountered it. “When I first saw it myself, I thought it was a parody, just in time for the premiere of 'Fifty Shades of Grey.' I’m still shaking my head."

We think that the ad -- as well as the tagline "you're going to suffer and enjoy every moment" -- is hilarious. However, the intent behind the marketing campaign very well could have been lost on the masses.

While Domino's founder has a history of anti-LGBT sentiment, he left the company in 2010. So, feel free to eat all of the bondage-themed pizza your hearts desire!