Sunday's final episode of Mad Men gave us an entirely unanticipated last look at Don Draper: sitting cross-legged with his eyes closed on a clifftop lawn at the Esalen Institute, chanting "Om," the primordial sound of the universe that was described eons ago in the Upanishads and is now familiar to anyone who's set foot in a yoga studio.

A few days earlier, the Pew Research Center released its latest report, "America's Changing Religious Landscape." Its findings, that the percentage of Christians has declined and that of the religiously unaffiliated -- aka, "The Nones," as in none of the above -- increased by six percent in the last seven years, triggered a flurry of speculation, especially about the segment of Nones called "spiritual but not religious" (SBNR).

What do those two events -- a poll of religious identification and the climax of an iconic period drama -- have in common? In a very real sense, that last glimpse of Don prefigures the rise of the SBNRs. 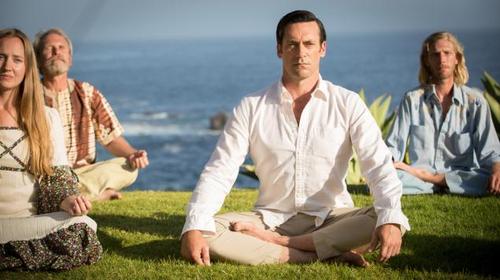 Of the many theories proffered for the steady rise of spirituality without borders, one factor should rank at or near the top of the list, yet is seldom mentioned: access to the precepts and practices we associate with Hinduism and Buddhism. Eastern ideas first arrived in the 19th Century of Emerson and Thoreau, who can be considered the founding fathers of SBNR. They seeped gradually into the fabric of American culture until interest exploded in the late 1960s, thanks to a perfect storm of inquisitive and discontented youth, ease of communication and transportation, popular authors like Herman Hesse and J.D. Salinger, the arrival of Indian gurus, Tibetan lamas and Zen roshis, and the Beatles' watershed pilgrimage to India.

Baby Boomers with a spiritual inclination were open to teachings that offered what conventional religions did not: methods of inner transformation and transcendence, and a metaphysic that did not contradict reason, history, science or their own experience. They learned from the East that the essence of spirituality was union with the Infinite -- the very definition of Yoga -- which has been given many names and can be reached by many paths.

By the fall of 1970, when the fictitious Don Draper was chanting Om in Big Sur, as millions of Hindus had done for centuries, Eastern concepts and disciplines had taken hold in the counterculture enclaves of every major city, and in college towns like Cambridge and Berkeley. It was not just for its exquisite scenery that "Mad Men" chose Esalen as the site of Don's transformative retreat. The institute was an East-West vortex from its inception in 1962. It became known -- and widely satirized -- for its naked hot tubs and New Agey encounter groups, but its principal seminar leaders were influential early adopters of Eastern ideas: Alan Watts, Aldous Huxley, Abraham Maslow, Huston Smith, Joseph Campbell and Richard Alpert, Timothy Leary's LSD coconspirator, who became the spiritual teacher Ram Dass after meeting his guru.

Don Draper caught the wave unintentionally. Matthew Weiner, the genius behind Mad Men, does not tell us what he imagines for his character's future, except that he presumably turned a Big Sur revelation into the harmonic Oneness of the iconic Coca Cola "Hilltop" ad. Maybe he was permanently changed, maybe he wasn't. But hundreds of thousands of others, most of whom were a couple of decades younger than Don, were radically transformed by the era's East-to-West transmission, and there was plenty more to come. A parade of gurus, Buddhist monks and yoga masters were about to make their mark; scientists were gathering scientific data on Transcendental Meditation; new forms of practice were being introduced and mainstreamed for seekers of better health, psychological stability and spiritual enlightenment.

The SBNR phenomenon accelerated from that point on. Without the teachings born in ancient India, independent spiritual types would have had few places to turn for guidance and sustenance. By now, the Eastern imprint is so much part of the landscape that it barely registers. Meditators, chanters and practitioners of postural yoga and mindfulness don't call themselves Hindus or Buddhists because there's no such thing as conversion in those traditions. The teachings are said to be as universal as the laws of physics, available to anyone and applicable in secular or spiritual contexts. Besides, why attach a label that sounds restrictive when you wish to draw from all sources of wisdom?

As for Don Draper, I like to think he got more out of his Esalen sojourn than a lucrative idea. In my mind, he went on to live a good life -- sober, balanced, capable of love -- and, in his eighties, if asked about his religious identity, he would say Spiritual But Not Religious.