What's a snollygoster? It's an obsolete word defined as, according to Wiktionary, "a shrewd person not guided by principles, especially a politician." The origin of the word is widely unknown, but most sources seem to suggest it's an alteration of "snallygaster", a 19th century German and Dutch word for a mythical dragon-like beast that preys upon chickens and children. While there's no concrete evidence as of yet of the latter, we can certainly attest to the former throughout our country's history.

I don't know Donald Trump so I can't judge him as a person. I cannot attest to whether he's ever attacked chickens, however, I can judge the unprincipled way in which he has and continues to conduct himself during his campaign for President of the United States. A child of privilege, whose KKK-supporting father staked him $1,000,000 to start, he masquerades as a "common" man, reaching into the fringes for support and loyalty. His anti-intellectual stance, fear-mongering, and disdain for the laws of this country are terrifying. He caters to the scared, uneducated, small-minded and ignorant among us. Even those with half a brain and fear what he could do, want him anyway just "to shake things up."

How exactly? Explode the nuclear arsenal? Put a sign on the country that says "Trump America"? Drag us all into bankruptcy even as he refuses to pay any of his own bills, as he has done with so many other vendors in the past?

I can hear him whining already:

"Social Security!? I don't want to shell out all that money on payments this month! Let the seniors starve!"

"WIC!? Who cares about poor children!? They should have been born into better families!"

"Healthcare!? Unless they buy it from one of my companies and turn over their assets and first born, let them die!"

"Taxes!? I don't pay no stinkin' taxes and you'll never see my returns, so there!"

(Quick note: All quotes are made up by me. I don't want to have even the hint of plagiarism!)

Dr. Sam Alibrando, author of The 3 Dimensions of Emotionshttp://amzn.to/2a6jrGL, has an interesting assessment of Trump's emotional intelligence. He writes how Trump's EI is "Dangerously low", and then goes on to assess the leadership skills of successful leaders and how on each and every level, Trump fails miserably:

He is by all accounts arrogant. Many people - including Trump himself - erroneously mistake this as "strength" rather than what it really is, immaturity and insecurity. The truth is that confident, mature and secure leaders (who are balanced with Heart humility and Mindful awareness) do not have to spend time referring to themselves. They are free to focus outward. Because of this, it would be near impossible for someone like Trump to ever really put the country's needs above his own.

Let's face it. Trump hates women, African-Americans, the middle-class, Muslims, Mexicans, Asians, and others, even as he exploits them all. He has no qualms about vilifying anyone, even a patriotic Republican father who lost his son in Iraq, and if someone calls him on his lies and misrepresentations, he insults them and calls them names.

He even boasts about his ignorance. Michael Bloomberg, the former Republican Mayor of New York, a self-made billionaire, and a more successful person than Trump could ever hope to become stated at the recent Democratic National Convention, "Trump says he wants to run our nation like he runs his business? God help us... I'm a New Yorker, and I know a con when I see one." Trump even has a video from his own TV show, "The Apprentice", which has the refrain, "I'm a dictator". 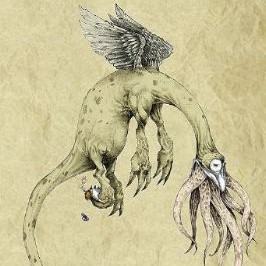 Seriously, how much harder do we have to be hit on the head before we realize that this "snollygoster" destroys the essence of who we are as a people. He is a bully and a braggart, even threatening those who speak against him. Would-be and actual dictators are always threatening to harm their opposition. Trump has no qualms about joining a despicable club that includes Vladimir Putin, Saddam Hussein, Idi Amin, and of course the granddaddy of them all, Adolf Hitler. After all, Trump's father was a huge fan, what with his KKK affiliation, and it's possible the apple didn't fall far from the tree.

Above all else, what scares me about Donald Trump and keeps me awake at night are the thoughts that his very candidacy has empowered and enfranchised the underbelly of American life. Sure, there are a ton of well-meaning people who support him, because being loyal to the Republican Party is more important than the Republic, or because they think he speaks for their view on a single issue topic, or because they dislike the Democrat's candidate. I understand different things drive voter loyalty. Most of the time, I don't care. We are a democratic republic and have the right to vote for whomever we please.

What I do not understand though is why these same well-meaning people are aligning themselves with someone who attracts and condones the actions of right-wing terrorists. The KKK now feels so enfranchised that their ex-grand wizard David Duke feels he can become a U.S. Senator. The Westboro Baptist Church, which gives all true Christians a bad name, finds comfort in Trump's messages of hate and violence. For all these fringe groups, Trump's candidacy promises power and prestige, and a resurgence of hate-filled rhetoric against anyone who opposes them - white or not.

"You can't help who admires you, but when white supremacists start endorsing you for president, you ought to start asking why," said Richard Cohen, the president of the Southern Poverty Law Center, which tracks white-power groups.

Trump's stunning ignorance reflects the same lack of a moral compass of many of his more sycophantic followers. While others are selecting him on a pragmatic ground and hope to contain his more egregious traits, his most rabid and loyal followers espouse his message of hate with as much welcome as morning coffee. They are most often uneducated, poor, and white. They feel that America has left them behind and when they hear the hatred Trump spews against non-whites, educated, and intellectual people of all races, Muslims, Mexicans, and everyone else, they feel vindicated in their personal worldviews.

For his entire life, Trump has exploited all these people, with his Trump University that surgically removed working class people's hard-earned money from their savings accounts with nothing to show; exploiting the foreclosure crisis; not paying his vendors and driving many small businesses under while he walked away with millions...the list goes on and on. You don't get sued over 3,500 times because you're doing business the right way. And yet, because he was on TV, he can again exploit the ignorance of his least common denominator followers who feel that because he is a celebrity, he is on their side.

It's really rather sad and sickening at the same time. There are days I wish I could go door-to-door and lead them through each argument and teach them critical thinking. I learned it as a young girl at Ohio Wesleyan, and I'd be glad to teach them how to recognize someone who has no heart, or mindfulness, as Dr. Alibrando describes them.

And just maybe, I could make them change their minds about Donald Trump.

But most likely not.

Donald Trump, the Snollygoster, now has a platform and a captive audience.

It's up to us, we the people of the United States, to make sure he doesn't gain a country.