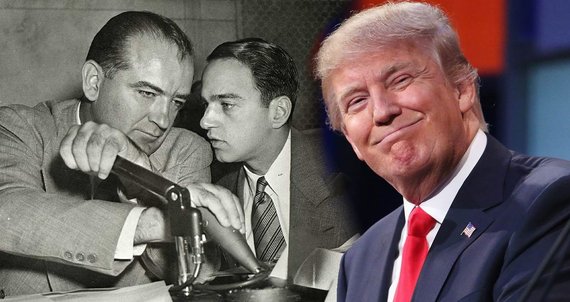 As a student journalist living in New Hampshire I have had my fair share of political coverage this past year. Whether its covering an event for my student newspaper, conducting polls, or simply just a class discussion one name that always makes me tune out is Donald Trump. For months, I ignored any discussion on him at all costs until my college hosted a speaker named Michael Meerpol.

Back in the 1950's Michael Meerpol was formerly known as Michael Rosenberg, the eldest son of notorious communist spies Julius and Ethel Rosenberg who were executed for sharing the "secret" to the atomic bomb with the Soviet Union. Although it has been more than 60 years since the controversial case was in the media, Meerpol said that the case is more relevant today than back then.

Today, Americans appear to be embarking on a similar witch-hunt fueled by fear -- this time instead of hunting for communists and spies, Americans are hunting Muslims.

Between the years of 1950-1954 former senator Joseph R. McCarthy began creating a nationwide hysteria against communists during the cold war or " Red Scare." McCarthy's ideology was dubbed McCarthyism and was know for, " The practice of publicizing accusation of political disloyalty or subversion without any evidence." McCarthy was an instigator, filing American minds with fear that communism was not just on the other side of the globe, but around the corner in the shadows of their neighborhoods.

With McCarthyism in the subconscious of suburban minds, it was no surprise that when the Rosenbergs were accused of committing treason that before they even went on trial, they were guilty. Although Michael said it took years before truth came that his father was indeed a spy. He said his mother was innocent, only guilty of one thing, "loving his father."

"This case is one worth remembering, one we can learn from," Meerpol said. " We would be destroying the nature of this country, we cannot have the country that Donald Trump wants us to be. We are better than that."

Meerpol said that back then, "communists were seen as traitors and today Mexicans are criminals and Muslims are terrorists." During his speech, Meerpol recalled a time at a friends house when his friends mother yelled at Meerpol to leave the house and for her son to, " Never see that communist again." Meerpol said that same things are happening and will continue to happen to Muslims if Donald Trump becomes president.

" My friends mother thought her family would be contaminated by me, a nine year old boy," Meerpol said.

That still happens today; families young or old still have strong beliefs especially when it comes to race and religion. Although instead of parents being afraid of their children having communist friends, they are afraid of their child having any sort of ethic friend. Whether thats African American, Muslim, Asian, Indian, etc. To me its sad, that my fellow neighbors can't look deeper than someones skin tone, or the fact that someone believes in something else different than them. It's scary that history is on the verge of repeating itself with a potential world leader like Donald Trump.

In a recent interview with Yahoo Politics, Trump said he was willing to take drastic measures to monitor the Muslim community. Some of those measures include, keeping an American Muslim database and special ID cards for Muslims. With Trump taking those dangerous baby steps towards violence against Muslims it's only a matter of time before his words become actions, perhaps even executive action.

We cannot let Trump's hate mongering escalate to the point of innocent life like Ethel Rosenberg's be lost due to nationwide fear of one particular group of people. Trump is a showman, I'm curious to how long the act will continue before something serious happens and when it does if he will take responsibility for it.