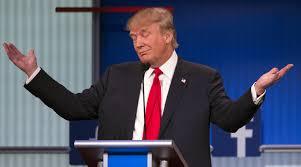 Donald Trump is what I would define as an Americanus Extremis, a man who embodies and exaggerates the American personality. It's his style, not always his content, which appalls Europeans, Canadians and other Americans.

To generalize, I believe that Americans have a Germanic social sensibility (18% are German ethnically and the same percentage partially German). This is by far the largest minority group in the U.S. and is why Americans and their media are direct, blunt and confrontational, are more competitive economically and boastful.

Canadians inherited the Anglo Saxon social sensibility. Manners "trump" everything, our press is tepid, social shaming had led to extreme political correctness, communication is not direct, confrontation is avoided and bragging is scorned.

Not only was Donald Trump's father German, but he became wealthy in New York City, a brutal and rewarding business eco system based mostly on moxie and merit, not on class or lineage. He's a self-made bullhorn.

These conditions - and aggressive market strategies -- have informed his belief that he is "great", his business track record is "great" and America is and should be "great". There's nothing nuanced here, like much of the American culture in general, and his more shocking pronouncements reflect that.

Personally, I find his public style entertaining and refreshing, but also narcissistic. His speeches are the ramblings of a cranky uncle at a party. He thinks, but does not, possess the skill set required to be CEO of the United States. He has run a sole proprietorship, a career that is, to be blunt, equivalent to a monarchy.

In Washington, he will inherit 340 million shareholders and a management team in Congress of hundreds who cannot be fired or roughed up. He must lead, aspire and coddle, not berate and insult. This is why the best line of the last Republican debate belongs to Jeb Bush: "You're not going to be able to insult your way to the presidency."

Bush is only half right. Trump may be able to insult his way to the White House, but once he gets there nothing will get done if he doesn't dramatically alter his attitudes and behavior. (Remember, America's founding fathers anticipated the possibility the electorate could elect demagogues so they created a torturous system of checks, balances and gridlock.)

What's helpful, however, is that Mr. Trump has pulled away the politically correct curtains. Take his biggest blurt so far - about banning Muslims from entry into the U.S. altogether for a while until better screening is devised. This resonates with a sizeable minority everywhere, thanks to the virulent and violent ISIS and its war against the world plus the reality that screening lapses are behind lots of attacks.

The facts are the west doesn't know enough about Islam to defend it or attack it sensibly. A little knowledge might have saved the United States $3 trillion and two wars in Afghanistan and Iraq where they didn't understand anything.

What's important now is that sensible people of Islamic background become front and center in all of this. A friend of mine, author and Islamic thinker Irshad Manji, made some important observations about all of this in a book review she wrote recently in The New York Times that should be heeded.

"Civilization has a civility problem. This I learned long before Donald Trump," she wrote wryly. Her essay mentioned the need to understand the distinctions between Islam and Islamism as well as political Islamists, revolutionary Islamists and militant Islamists.

She also agreed, with the author of one book she reviewed, that liberals must admit that religion motivates much Islamist terror. (That's a fact and to blame mental illness or poverty or discrimination is beside the point and not helpful, albeit politically correct. Radical Islamists prey on such conditions to recruit for murderous purposes.)

These are reprehensible and must be criticized and punished there and here. The same applies to abuses perpetrated by any religion or culture.

She also suggested that secularism is not the answer. "Secularism in another culture can easily become an exclusionary dogma. Witness France," she wrote.

Ironically, she believes ISIL may be the beginning of a solution. "The Islamic State's savagery against Muslims offers hope for taking power politics out of Islam," she writes. Similarly, Europe's Reformation Wars savaged the religious people it purported to defend and led to change over time.

She closes her review with the ultimate solution: "the simplest moral principle of all ... if you seek respect, you must give respect."

She's right, but this cannot be one-sided and all leaders, societies, judicial systems and religions must embrace that principle. If they do not, they will not deserve respect.