It's time to put the moral crisis over the political one. Donald Trump's potential nomination by the Republican Party is not just a crisis for that party and for election politics in general, it is a moral crisis for the country, for democracy itself, and for the state of faith in the nation. 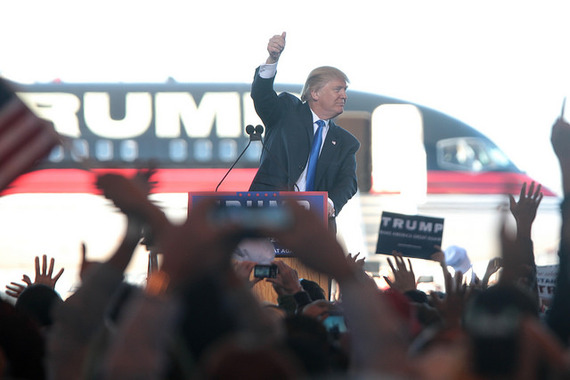 The media can act shocked about Trump failing to quickly and very clearly denounce David Duke and the KKK and their support for him, but they didn't seriously ask the more important question: Why do the advocates of white supremacy like and advocate for Donald Trump?

Here's why: When a person fears death to his way of life on the horizon, he fights like hell to cling onto it. And that's what is happening now.

If what you, as a white person, are most worried about is how the demographics of your country are changing to make it more diverse, what you really need is a strong white man who will block, obstruct, deny, or delay that demographic from changing the country further. And that's what Donald Trump promises to be for them -- an authoritarian in his leadership style with the message of a bigot. He's threatened the press with libel laws that would allow the government to go after them. He said the Republican Speaker of the House would need to support him as president or he would "pay a big price." He has attacked the judge presiding over the Trump University lawsuit, implying that he is not being impartial toward Trump because the judge happens to be Latino. And anybody who ever opposes or challenges Trump gets called every name in the book with a vile tone and language we would never accept from our children.

If Trump could turn American politics into a TV reality show, which he really already has, there would be little respect for the balance of power between government sectors; for freedom of the press; for civil discourse about disagreements in a democracy; and certainly for the racial diversity that is building a bridge to a new America. Instead, Trump promises to build walls to stop all that -- many of them. Even Pope Francis said that kind of wall building is "not Christian."

Trump is the ultimate "boss" and loves that role. That might work for him on The Apprentice, but would public officials, reporters, political opponents, and dissenters feel threatened by an American president acting like everyone else's boss in the White House?

Of course, not every Trump voter is a KKK enthusiast, but they should feel bothered by those who are. Let's be honest: Racial fear, anger, and even hate are core to Trump's message. While most of his voters would not embrace the overt and explicit racism of the KKK, the covert and implicit racism so common in white America has always been at the center of Trump's campaign and his appeal.

Trump started and has continued his campaign with vicious personal attacks questioning the birthplace of the first black president -- saying he is not one of "us" -- which the majority of his supporters enthusiastically believes. Trump launched his presidential campaign with a speech debasing Mexicans, he says he will divide by deportation the families of 11 million immigrants, he promises unconstitutionally to ban Muslims from entering the country, and to put all those already here under surveillance -- which his followers also support.

If Donald Trump does win the nominee of the Republican Party, no one could any longer claim that they are "the party of Lincoln." Lincoln fought and governed against racism, and Trump is selling it. Lincoln fought to unite the nation; Trump is a fighter who wins by dividing Americans.

We will see how many Republican leaders will say they won't support Trump because of his character, values, and policy positions. Some Republican columnists already have testified how Trump violates genuine Christian and conservative principles.

GOP strategist Peter Wehner says, "Trumpism is not a political philosophy; it is a purposeful effort, led by a demagogue, to incite ugly passions, stoke resentments and divisions, and create fear of those who are not like 'us' -- Mexicans, Muslims and Syrian refugees. But it will not end there. There will always be fresh targets."

Wehner contrasts that with the principles of Jesus, saying, "... a carpenter from Nazareth offered a very different philosophy. When you see a wounded traveler on the road to Jericho, Jesus taught, you should not pass him by. 'Truly I say to you,' he said in Matthew, 'to the extent that you did it to one of these brothers of mine, even the least of them, you did it to me.' ... At its core, Christianity teaches that everyone, no matter at what station or in what season in life, has inherent dignity and worth."

Michael Gerson, an originator of "compassionate conservatism," says, "Trump's conception of leadership is to become large by making others small. In a reality television star, this is a job qualification. In a president, it would raise the prospect of serious damage to our democratic system."

The biggest falsehood Trump proclaims is, "I am a great Christian," which embarrassingly demonstrates how little the billionaire real estate dealer and casino owner understands Christian values. Trump's rejection of Christian humility, integrity, fidelity, and compassion is further exhibited in his refusal to repent of America's original sin of racism; instead he embraces it.

Some of the personal conversations I've had since the Trump victories in the Super Tuesday primaries reveal what the moral stakes are now. Two Hispanic Christian leaders told me how fearful they and their people were. "What's going to happen?"

A deeply respected black church leader explained that Trump confronts them with a racism "without nuance," which tells other white people they can say and do anything they want.

A black traveler stopped me in an airport and asked, "What are we going to do?"

It will be very telling to see whether white conservatives and white faith leaders "disavow" Donald Trump.

My own sons are paying attention to this, as are a whole generation of young people. Only 2 percent of his supporters are under 30. Watching the primary returns, my older son who will vote this year for the first time, remarked, "America needs to admit the masses of bigots we still have ... and idiots." My 13-year-old, in his usual humorous way, came up to me and said, "Sorry Dad, I'm going Republican. Donald Trump really gets to me. He really understands how hard it is to be a white male. That grade in my math test shows how hard being a white guy is. Donald understands that, gets it, and is speaking for me." The gleam in his eye covered the alarms he expressed later. "This is really scary Dad."

By mid-century, America will no longer be a white majority country, and many older white Americans -- Trump's voters -- fear and resent that. While Barack Obama didn't win the white vote, he got black, Hispanic, Asian-American, and young voters. And many other white Americans will be voting positively for a country that is becoming a majority of minorities and are with a new generation. Our numbers are growing.

Jim Wallis is president of Sojourners. His book, America's Original Sin: Racism, White Privilege, and the Bridge to a New America, is available now.