The American conventional wisdom pushers still don't understand either populist movement raging within it's walls. The Trump phenomenon isn't just ignorant nativist populist rage, it's a deep seated anarchist malevolence that comes from the indoctrination of people into believing that even the facts themselves can differ person by person. Get people angry enough and find some "others" to go after is an old hat, but tie that up with the soft complicity of infotainment and the fertile fields of for-profit news media and you you have a powder keg waiting to go off. We live in a world of trusted sources, and the most trusted source for this movement might as well be the Heath Ledger joker.

A monster has been created, the monster heaves, bellows and destroys. However, the monster did not come out of nowhere, the situation that birthed him has been carefully planned for nearly two decades. The cruelest irony is that Golem is not what was intended or meant with this years of planning, and that is maybe the only solace any thinking person can take from this situation. 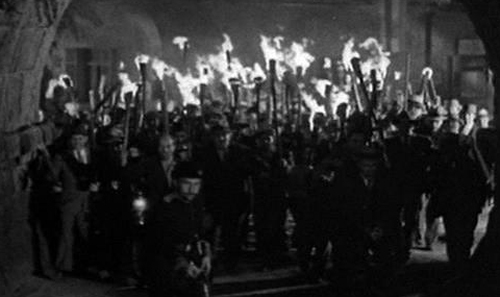 from a recent Trump rally.

More bad news on that too, even when the figurehead for this movement falls, be it through a contested convention that will break the back of the modern Republican party and send them into the wilderness for years, or through a Reagan/Mondale Nixon/McGovern style rout those people don't just snap out of it, like rioters after the head of the moment passes. No. They still will see all of the world through the lenses of those that have been wronged and unless that is addressed head on through the frame of the problem and not with a barrage of facts this will happen again, and again.

This is my problem with establishment Democrats and classic Liberalism. They STILL don't understand the concept of frames. There is a great book called Don't Think of An Elephant by a cognitive linguist named George Lakoff. It's an incredible read, it shows how using phrases like Tax Relief (Instead of being the price you pay for living in a free society, it's an affliction) and Pro-Life (really? Pro-life, so you are against the Death Penalty?) rewire people's thinking to more conservative mindsets, even if it does not actually reflect their values. Who is against relief from taxes? Who is anti-life? Who doesn't want to Make America Great again?"

It's an ingenious work and again, recommended reading.

It also seems to be mostly ignored these days, what with people trying to fact check Donald Drumpf at every turn. His supporters don't care! Not at all. They want revenge, they want the world to burn, they want theirs. That is what is there to understand. You know what they are happy about? You getting upset! *NYEAH!* *NYEAH* Make America Great Again, etc.

Yet many Progressives, Liberals, Moderates, and even some establishment Conservatives treat his supporters like an other as well. Like Juggalos, or some other such group of people with a shared belief system, disinterest in normal culture and a vested anti-intellectual bias that borders on the pathological. That is the problem.

I get why the establishment media doesn't get it, these are the same people that thought Marco Rubio was exciting and doesn't understand why Larry Wilmore bagging on their colleagues absolutely slays with us proles. However, there is no reason that we cannot, should not, and indeed MUST do better.

It's hard; we live in a culture where it is easy to surround yourself with confirmation bias. Bunches of people that all agree with every word you say and one-up you on a regular basis. It's hard to break out of that.

There is only one way to fight this war, Hillary Clinton supporters seem to think that harassing, condescending and browbeating supporters of a transcendent progressive populist candidate into being "on their team" is enough. I assure you that it is not. The Sanders campaign is a legitimate populist movement borne of a desire to change the game completely; it doesn't really share that much in common with the Clinton campaign at all other than short-term siege like goals. It's disingenuous, reductive and misleading to claim otherwise.

It's a long way until November, and when it comes down to it this is an ideological war. That time would be better served diffusing the Ditto head/Birther/Trump rage and cutting the circuit to show that there is no "other", there is only us. Instead, we... and I use the pejorative "we" because it is such a 7th grade debate style mistake, we attack them with facts. Look! What he said was not true here, this policy doesn't work, this poll says.

They. Don't. Care.
That doesn't make them bad people, ok... maybe some of them are, but don't waste your breath with facts. Attack the Frame. Drumpf tries to embody the strict father/strong leader model as if he had a step-by-step guide. It isn't hard.

I don't think Hillary Clinton is even fighting the same battle, her tedious victim kabuki seems to work great for the media and for her strong base of support, but if the Democratic establishment doesn't get to the heart of the fury that started with the birther movement and tea party and seems to be culminating with Trump.

One of the only things I like about Hillary Clinton is that she is a brutal tactician and strategist who is singularly effective at reducing her political enemies to dust and leaving their fields burning. I don't like her, I don't support her and I will vote for her only begrudgingly in the general election. Know that comes from a lifetime of watching her work, and knowing what she stands for.

She is fighting a different battle than Trump is right now. Yes, it sucks that one has to use Karl Rove type tactics for attacking an opponents strength to win, but that is what we have decided are the rules of engagement.

We are still in a much more serious battle than her supporters want to admit or realize, and it is not over yet. However, when it comes to the larger conversation of winning a general election condescension and fact-attacks will be about as effective as spitting in the wind. No matter if the nominee is Hillary Clinton or Bernie Sanders, we need to adjust now before it's too late.

Bernie Sanders seems to get it, even if the media doesn't get him. John Oliver gets it, big time. 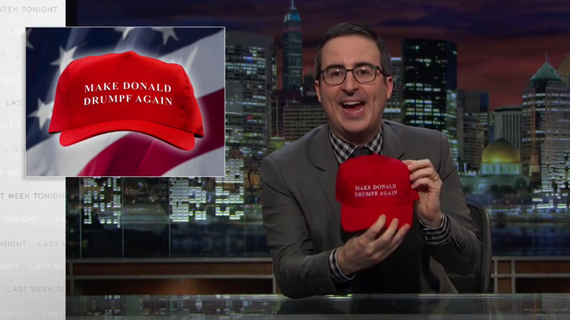 It's a two point plan, really: Destroy the frame of Donald Drumpf as a strong leader and successful businessman, and some kind of populist true believer. That's the easy one.

The harder point is to talk to your fellow Americans, remind them that we're all in this together and do it without being a total elitist reductivist jerk. Yeah, that is going to be hard.

We have an oncoming wave of forces that want to take us back to the dark ages. Their current leader is a pompous huckster of a reality show star who can easily be undone if you look at the actual problem. Unfortunately, that is only the beginning, but I have good news!

We've identified the source of the problem, the question just is what do we plan to do about it?