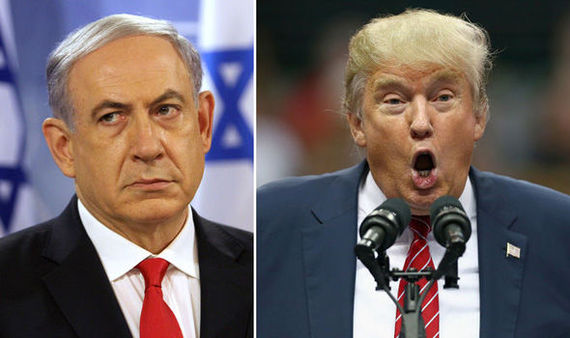 The news that candidate Trump is going to address AIPAC, the American Jewish lobby group that lobbies U.S. government support for Israel, is part of a great unhinging.

But the traditional protocols by which any leading candidate is invited to AIPAC ignores how much the old status quo is now threatened by a fundamental state of collapse. Reflecting what's wrong with AIPAC, the controversy reflects what's wrong with Israel, America, and American Judaism.

-- Israel is today a country led by an extremist radical rightwing government whose members openly espouse anti-Arab racism while undermining democratic norms in the name of ethnocentric and religious forms of Zionism -- namely those very shared norms that are supposed to establish the bedrock foundation to U.S.-Israel relations. After some nearly fifty years of occupation, Israel is becoming unrecognizable to large segments of the American and American Jewish public.

-- American political discourse today is dominated by an extreme authoritarian who traffics openly in angry populism, religious intolerance, crude racism, xenophobia, and gross misogyny. Fueled by the very media upon which the candidate heaps contempt, he represents a political phenomenon crossing over into political violence. A clear redline should have been drawn in this particular case. Racism is as American as apple pie, but its best instincts and institutions are pluralist and democratic. In Donald Trump, the Republican Party if not the country itself is becoming almost unrecognizable.

-- By inviting Trump to its convention, AIPAC, having long since become dominated by rightwing Zionism, no longer represents a bed-rock consensus in the American Jewish community. Technically, AIPAC is supposed to support whichever government in Israel the people there elect, and elicits support from whichever candidates are chosen by the American people. The protocol courting Democrats and Republicans alike may have once worked more or less well; but today not so well. The invitation legitimates the position of a rank American demagogue while aligning the American Jewish community with an extreme rightwing currents in Israel. In the process, AIPAC undermines democratic norms in the two countries whose alliance the organization promotes.

Many Jews in the United States are applauding Bernie Sanders for skipping the meeting. The Trump invitation only confirms what they already believe about Zionism. Indeed, it would be both easy and unrealistic simply to wash one's hands and walk away from AIPAC and the cause it represents. But for most American Jews, too much has already been invested politically, morally and emotionally into Israel for that to either happen or to end up well. For the Jewish community, it will be nothing less than a disaster to watch in the public eye a room full of lobbyists applauding when a demagogue panders to them with simplistic words and crude expression about two countries facing complex and potentially fatal challenges.

Politically and morally, Zionism and Israel cannot afford to be hitched to the candidate of white supremacism, particularly to the anti-Muslim racism he promotes. Regardless of ideological persuasion and party affiliation, the best thing for the United States, for Israel, for the American Jewish community, and for AIPAC itself as an organization would be for people inside and outside the convention to come together in rigorous protest and to recommit to democratic norms when Trump speaks.