The award-winning actress apologized for a tweet she shared that incorrectly claimed Trump once said he’d run for president as a Republican because “they’re the dumbest group of voters.” He never said it, although the debunked quote often makes the rounds on social media.

“Don’t know how I missed it,” Midler wrote. “But it sounds SO much like him that I believed it was true!”

Yes, one must always check the quotes. That should take up, oh, maybe 23 of the 24 hours in the day? Because there are SO MANY LIES, most of them generated by Trump himself, that the task of separating the truth from the lies is impossible. Which is just how he likes it. #CHAOS

I have to say, t sounded so much like “All Mexicans are rapists” and “I’m the greatest Predident” that I bought it! I think we should investigate who created that tweet! They really captured his tone and his personality! What a textual impersonation!!

Midler is a regular critic on Twitter, often using crude jokes and imagery in her attacks and at times coming under fire for going too far.

In this case, Trump responded by calling Midler a “psycho” and a “sick scammer”:

Washed up psycho @BetteMidler was forced to apologize for a statement she attributed to me that turned out to be totally fabricated by her in order to make “your great president” look really bad. She got caught, just like the Fake News Media gets caught. A sick scammer!

The two have a history that long predates Trump’s political career, so much so that Deadspin writer David Roth predicted Trump’s tweet... sort of... more than two years ago:

The most Trump thing would be for him to fire off a bunch of tweets at 5:50am about how Bette Midler has gained some weight or something.

Roth was off by a few hours; Trump’s tweet came at about 1:30 a.m. in the UK, where he was traveling on a state visit.

I would like to address this for a moment. Obviously my brain is torn up and full of holes. Just full-on pulled pork in there. But Trump's been feuding with Bette Midler for years. He tweeted about her on the night Hurricane Sandy hit NYC! https://t.co/Rfik32BvdA

A hurricane that would leave all of lower Manhattan without power for weeks was in the process of sending a storm surge through the streets when Donald Trump tweeted this about the star of Beaches. https://t.co/xSBFUE6COj

Indeed, Trump fired off a series of tweets slamming Midler during the 2012 superstorm, which did $70 billion in damage.

Trump’s latest attack on Midler received quite the reaction on the social network:

Go to sleep you lunatic.

To be fair, it's not that different to you spreading lies about Obama's birth certificate. Remember that classic?

I love everyone pointing out that it’s 1:30 in the morning in London as though it would be normal for the president to fight with Bette Midler at, say, 4 in the afternoon.

cuckoo for cocoa puffs in any time zone #DerangedDonald https://t.co/mSs27ZVjH9

I just spent an hour reading about Eisenhower the day before D-Day. Reading this tweet after that hour was like jumping into a lake in the middle of winter. https://t.co/RNb4czqwfy

@BetteMidler is a national treasure, whereas you, @realDonaldTrump, are a national disgrace.

Just a hypothetical - if we had a "washed up psycho" as president, should that person resign?

Asking for a friend.

It's a good thing your wife is against bullying...#BeBest

‘Washed up psycho’?
1) The fact that you’re using your platform to bully a citizen is beyond appalling!
2) @BetteMidler won 3 Grammys, 3 Emmys, & a Tony.
You were awarded Bone Spur of the year! 🤔 5 yrs running?
3) You’re a despicable human!
4) Resign

You’re the president of the United States man get it together. 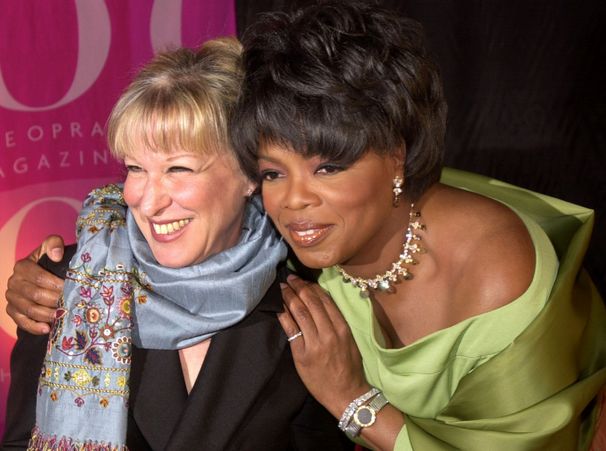 1 / 10
On Life...
"Life is not fair. And you have to <a href="http://www.oprah.com/omagazine/Oprah-Interviews-Bette-Midler/5">choose your battles</a>, because there are some that you cannot win. If you're passionate about something, then you should pick up your flag and run with it." <em>PHOTO: Oprah Winfrey and Bette Midler pose on April 17, 2001, at a first anniversary party for O Magazine in New York. </em>
Getty