Mohammed Salih is precisely the type of academic the United States would want to keep within its borders: a 33-year-old doctoral student at the University of Pennsylvania’s Annenberg School for Communication studying how extremist movements in the Middle East use and manipulate the media.

It’s a research area with obvious implications for counterterrorism operations. And it’s one that Salih wants to continue pursuing in the United States after he gets his degree.

But Salih, who is here on a student visa, has a problem. He’s from the Kurdistan region of Iraq, which means that under President Donald Trump’s executive order ― designed to impede the worst outcomes of extremism ― he would be prohibited for the next 90 days from coming back into the country should he leave.

And he needs to leave. His research brings him back to Iraq as well as to various international conferences. He attended one in Beirut just four days before Trump’s inauguration. His family is in Iraq, too, and should there be an emergency, he’d be forced to choose between uprooting his life or missing out on family events.

He is now contemplating the once unthinkable. After waiting seven months for his first visa and four months for his second, he’s now waiting 90 days to see if the suspension of refugees and travelers from Iraq and six other countries is lifted. If it is not, he’ll explore greener career pastures outside of the United States.

“Before coming to Annenberg, I had admission from Concordia University in Montreal, which is also a good school. And when I was weighing my option, I was thinking quite a bit about it given the rhetoric in the primaries,” Salih said. “At the end, because of Annenberg’s standing and reputation, I decided I would want to come here. And you can imagine, right now, i’m sort of wondering quite a bit if I made the right decision. I’m actually wondering whether I should have not picked the school in Canada and gone there.”

After just 10 days in office, Trump has shaken the world of science and academia. It’s not just the general skepticism that he and his Cabinet seem to bring to some fields (predominantly climate science) or the promises he’s made to tighten the nation’s discretionary spending, which could come at the price of federally funded scientific research. The Trump White House’s decision to clamp down on communication from various federal agencies, including the Environmental Protection Agency, has left researchers frightened over political influence seeping into their work. And his executive order has left students and scientists in limbo, removed from their classrooms and work.

Advocates are warning that the inhospitable environment will lead, quite quickly, to a brain drain. A young generation of thinkers, academics and researchers might simply look to other countries to conduct their work.

“We understand that a strong visa policy is important for our national security. But if we abandoned our goal here of attracting the best and brightest, the long-term implications are serious for our leadership in the world,” said Association of American Universities President Mary Sue Coleman. “I would have a tough time, if I felt that we couldn’t be welcoming as a country, telling a student that he or she should come here.”

Already, the beginning of brain drain is taking shape. Coleman said the Institute for International Education estimates 16,000 to 17,000 students hold valid visas from the seven countries were listed in Trump’s executive order. Many prominent schools spoke out in concern Monday, while entire research labs were thrown into uncertainty.

Beyond that, there are faculty and university staff from those seven countries who are unable to leave the U.S. now or, in some cases, return to their classrooms. Two associate professors at the University of Massachusetts Dartmouth were detained at Boston’s Logan International Airport over the weekend. A Yale professor was separated from his wife and newborn, who were visiting family, while a professor at Middlebury College remained decamped in Iran with his two children waiting for further guidance on whether he’d be allowed back into the United States with his green card. The Association of American Medical Colleges warned that its ability to attract top talent from around the world was being threatened.

Scientific consortiums and organizations are planning to move conferences overseas for fear that they couldn’t have full attendance under the constructs of Trump’s order. The International Astronomical Union urged U.S. officials to reconsider their screening measures, noting that they had hosted a conference in Hawaii in 2015 with about 3,000 astronomers, including some from the seven targeted countries. Wendy Naus, executive director of the Consortium of Social Science Associations, said that, on a phone call to discuss the executive order Monday morning, two members of a group of scientific societies pushed to move their conferences to Canada.

“People are scrambling right now in the scientific community to figure out all the ways it plays out and what it means for grad students, innovation and the private sector,” Naus said. “If it is a glitch or a blip, and the outrage is heard and things go back, the damage isn’t done. But if it is the new normal, then, yeah, we are risking our competitive advantage. These are fundamentally things we’ve never confronted before.”

As the United States begins closing its doors on foreign-based scientists, other countries are sensing an opportunity. Kaz Nejatian, co-founder and CEO of Kash, a next-generation payment company, promised to connect those turned down for H-1B visas (which Trump is rumored to be targeting for restrictions) with Canadian tech companies who are hiring. Meanwhile, U.S.-based tech companies ― at least those who spoke out ― were uniform in their disapproval of the executive order, noting that they’d be left without the ability to recruit from some of the best workforce pools.

Lawmakers are acutely aware of this issue, not least because many hail from districts with universities and others receive campaign donations from groups and industries affected by the executive order. But the prevailing sentiment within the White House has been against opening up U.S. borders.

“That’s a real problem,” said Liz Mair, a pro-immigration Republican strategist, “both in terms of risking longer-term brain-drain but also in terms of actual direct, day-to-day health care where America is very reliant on foreign nationals— something that might change in 10 years but can’t change in the course of 72 hours and might matter to a lot of people in the next 90 days.”

The concerns for science and research advocates go beyond immigration policy. Apparent gag orders at the EPA along with the fear of belt-tightening from Congress will sour the scientific climate and drain the pool of funds for prospective researchers. In that environment, the more established scientists with better known projects tend to thrive, while the younger ones flounder, become discouraged and look elsewhere.

Naomi Charalambakis, 26, a U.S. citizen, is a third-year doctoral student at the University of Louisville, studying anatomy and neurobiology. But upon graduation, she plans to leave the field. Part of it is a lifestyle decision, an eagerness to have a family and a 9-to-5 job. But the funding climate is also daunting: Her mentor, she said, has stopped ordering lab supplies over concerns that appropriations will dwindle. And her career choice is a reflection of that.

After earning her doctorate, Charalambakis plans to come to Washington, D.C., to advocate for expanded budgets at the National Institutes of Health, the National Science Foundation and elsewhere.

“My colleagues are frustrated and don’t know what to do. A lot of them say they don’t know if they can continue in the lab and are wondering if they will have to start all over and have another career entirely. I feel we just can’t be quiet.”

With The Stroke Of A Pen, Trump May Have Sparked An American Brain Drain
UK Protests Executive Order 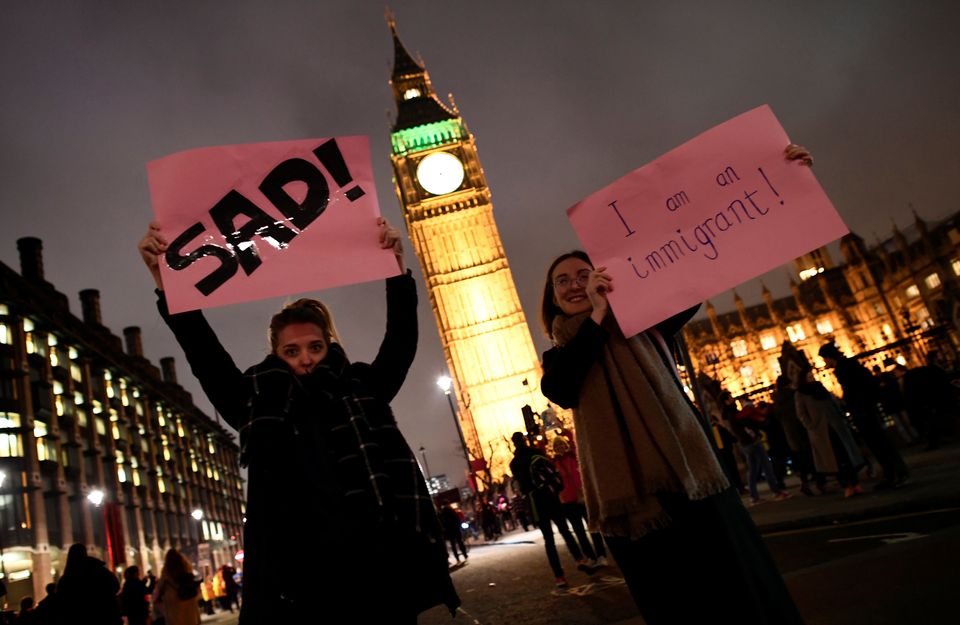 1 / 11
Tens of thousands of protesters gathered in London on Monday to protest the Trump administration's decision to ban the entry of Syrian refugees and travelers from seven Muslim-majority countries to the U.S.&nbsp;
Dylan Martinez / Reuters