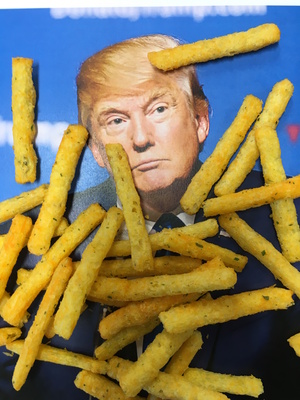 "Waldo, you're the best son money can buy."

I did not sign up for this. No way. My wife and I do a lot for our daughters, 8 and 10, but I draw a firm line at having to watch Donald Trump in a movie cameo.

It's bad enough that I'm forced to think about Trump incessantly in the age where he is as dangerously close to the American presidency as we are to at least four years of having to stare at his hair. It's bad enough that after the tragic Orlando hate crime we have to listen to Trump's bluster-filled pronouncements (hooray for the Politifact fact check!).

It's bad enough that I can do a "find and replace" with Charles Lindberg for Donald Trump while re-reading Philip Roth's The Plot Against America and find both narratives equally terrifying. It's bad enough that when I walk North on Wabash Avenue in Chicago's Loop I have to stare stupidly at giant "TRUMP" lettering emblazoned on his building, with the absurd serifs hanging off the letters like dull switchblades protruding from the fist of a snappish child. 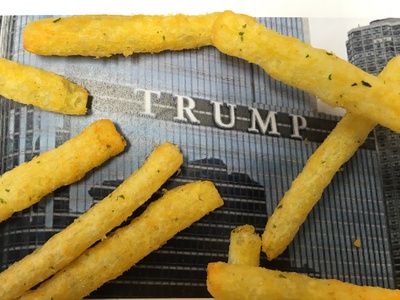 And yet there we were--my family, which should be Trump-free--on a recent morning in the lazy interlude between the end of the school year and the start of camp.
To pass some time, we screen the The Little Rascals move (1994). Like most casual observers, I know only the most famous Our Gangers--Spanky, Darla, Alfalfa, Buckwheat, Froggy. I thought, perhaps, that the screening of the 1994 film in 2016 would offer some abstract object lesson for my children in the original culture of Hollywood youth-sploitation and that perhaps--I went in clueless--a remake might provide enough acerbic meta-commentary to justify the attention. 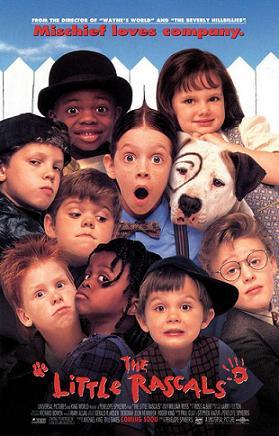 Don't waste your time. It's dreadful.

Yet what makes The Little Rascal's movie interesting, and I am really stretching here, is the obvious pastiche of its uncritically assembled set pieces. I couldn't fathom whether it took place in a hyper-stylized version of the Great Depression, as the clothes and mannerism of the large Rascal gang suggest, or in an early 1990s bland-scape where everyone else dresses like they were raised in an enormous indoor mall. The desperate cameos--Lea Thompson, Reba McEntire, Whoopi Goldberg--could all well be valedictorians from The Gap.

The Rascals all speak in absurd adult double entendres while remaining trapped in the bodies of the characters they have come to inhabit decades later. It's like the entire pack of children were frozen on the lot only to be thawed out in a Hollywood microwave. Instead of tiny Captain Americas in cold storage or Animaniacs now defrosted to wreak, in a better program, Groucho Marx style word-havoc, these characters are merely warmed over.

Who can forget the hilarious scenes? Spanky and Alfalfa dress as female ballerinas in an attempt to avoid the bullies, Butch and Woim, in one misogynist insult to movie watchers everywhere (6-year old bully to the boys-dressed-as-ballerina: "Babe, you got a burger to go with that shake?"). Not your bag? Ok. How about Alfalfa performing his trademark off-key vocal stylings after drinking dish soap (bubbles!).

And yes, sigh, there's a plot: Waldo, a snooty Richie-Rich rip-off, competes with Alfalfa for the heart of Darla. Alfalfa, as in the classic Rascals, is a reluctant member of Spanky's He-Man Woman-Haters Club, and Waldo is the antagonist who tries to win Darla. In yet another moment of really uncomfortable grownup-ness, Waldo and Darla sit like lovers in a hot tub, sipping indistinct drinks, striking a puberty tableau that comes across as just plain creepy.

Eventually, the "plot" climaxes in a go-cart race that, in the form of three go carts, brings three narrative strands to their unholy fruition. The bullies ride in The Rascal's previously undefeated roadster, stolen and painted; the Rascals sport a new-yet-untested Frankenstein model, assembled in minutes from neighborhood detritus by the scrappy members of the He-Man Woman-Haters Club; Darla, hidden under a sleek astronaut-style racing suit, rides with Waldo in a souped-up silver machine. To describe it anymore would be further demeaning to everyone involved, but that's when things go really off the track.

That's when Trump makes his cameo.

Waldo, mid race, reaches for a primitive cordless phone and (while driving) dials his father. Cut to the stands and it's The Donald, caricaturing his reputation as businessman convinced that all a person needs to succeed, ultimately, is a tenacious inability to connect with others.

Trump: "Waldo, you're the best son money can buy."

Of course, Waldo loses, as do Butch and Woim, bested by the heartfelt antic of Spanky and Alfala. We never see Trump's reaction, but you can imagine the scene later on:

"That was a bad race, believe me, and Waldo, right now you're a complete nobody. Those Rascals are even worse though. They're a disgrace. Look at Spanky, he's overweight. Fat. And there's the other one, Bean Sprout, with the hair. It looks like he used a fork for a comb. Sad."

What's really sad is that my daughters are aware enough of who Trump is that they recognize him. I'm spilling my coffee. I'm indignant he's even on the screen. He's gone in moment, but his appearance fits the grim specter of our horrible political moment.

Even in 1994, Trump is a figure out of central casting. He's not Froggie, Buckwheat, or Stymie. According to Never Trump Republican operative Rick Wilson, he's got a new rascal nickname: "Cheeto Jesus." He's a giant word pasted on a skyscraper. He's the ugly American that we worry will take the phone call at 3am, perhaps on an oversized cordless phone.

He's the image I have to explain to my children even in the midst of what should be an otherwise throwaway film. He's always on set. He's always ready for his close up.

In the closing credit bloopers, Trump spits out a bit of food he steals from a neighbor's bag, and with a smile, tells us how to read the scene:

"That is bad popcorn."

Girls--what do I even say?--let's forget everything we've just seen.

Big problem Daddy, they tell me, wise beyond their years, we may be forced to watch this movie again and again.

More:
presidential electionalfalfaour gangRick WilsonParents
Newsletter Sign Up
Raise the kind of person you'd like to know
Subscribe to our parenting newsletter.
Successfully Subscribed!
Realness delivered to your inbox