I'm not sure what disturbs me more, Donald Trump or the people who are blindly following him. I had no idea so few schools taught government in our country. It seems to be a problem throughout the GOP, but Trump and his followers take the prize for ignorance of our constitution. 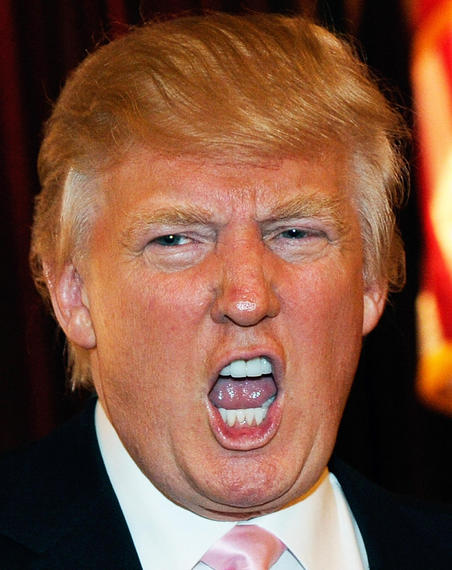 After watching 'the Donald' on 60 Minutes, and Scott Pelley trying to keep a straight face, it is pretty clear to me Trump wants to be a dictator to the world, not the president of the United States.

The absurd ideas he blithely throws around, like he's got some magic wand and the world will gladly listen and follow him, are very disturbing. Every CEO, politician, TV/Movie star, have huge egos. It's a necessary part of commanding attention. But, there has never been an ego as large as Donald's.

As he proudly gives Pelley a tour of his office, with magazines laid out on a huge table with his face on the covers and walls filled with photos of himself he says, "I've been on more covers than any super model." Like it's part of what makes him 'great' in his own mind.

"Politicians love me," he tells Pelley.

"Yeah, but you're not going to be able to buy them anymore," Pelley replies.

Trump is not a self-made man. His father was a millionaire, making his money in real estate, and giving his son free reign in Manhattan to build his own empire. He has never struggled and couldn't possibly understand the middle class, let alone anyone in poverty.

After revealing his 'plan' to make America great again, I had to laugh. You would think he'd have a better handle on finances but when you can declare bankruptcy at will and move on you have no idea what is real. Think about Atlantic City, NJ. There's a legacy for you.

He honestly feels he can break the free trade agreement, devalue China's money and make them end North Korea's nuclear program (because they'll listen to 'Donald'), round up millions of immigrants and deport them through his beautiful wall with the lovely door, and that's just for starters.

He's suggested we have ISIS fight Assad in Syria, then we kill Assad and end ISIS. Then he says, "Better yet, let Russia end ISIS."

The day after the 60 Minutes interview aired he held a news conference to announce his tax plan.

No taxes for anyone making less than $25,000 annually or a married couple making $50,000. I'm sure that sounds great to a lot of people but, it is completely irrational. He's also put some safety nets for the 1%, of course, but has no idea how we'll keep the country solvent after that. All he has to offer is, "Trust me, I'll make it work."

Diplomacy is a major factor in our survival on this planet. Diplomacy is something Trump does not have in his little bag of tricks, nor does he understand it.

When you're born with a silver spoon in your mouth and have never had to struggle for anything, ever, you are completely out of touch with most of the residents on the planet.

It is beyond sad the numbers of people who believe the tripe that comes from his little-puckered mouth. We really need to get Government classes back in all schools!

I'm an artist who writes and blogs about things I have a passion for.