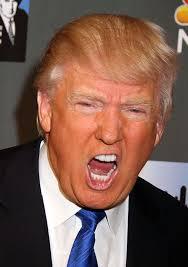 For the past eighteen months, political pundits have been struggling to get a fix on the personality of Donald Trump, without much success. Their problem is that they live in the world of politics, where power and influence are the ultimate commodity. For them, Trump is a real anomaly. But for those of us in the screen trade, he is a very recognizable and familiar type.

In Hollywood, Trumps are a dime a dozen, both onscreen and off. All they care about is their celebrity quotient. Insecure and narcissistic, they have an insatiable appetite for attention. How else can you explain celebrities who bristle at the paparazzi but leap at the chance to land a People magazine cover or a lead-in on TMZ?

The Trump personality is a familiar onscreen character as well as off. It generally takes one of two personas -- the diva in her declining years who yearns for the adulation of her fans and the aging Don Juan who is desperate to re-live the conquests of his youth. While both of these characters are hallmarks of Hollywood's often sexist and misogynistic past, they still pop up in films and TV.

One of the most memorable "diva" types was parodied in the 1991 comedy Soapdish. Sally Field, in the role of soap opera star Celeste Talbert, despondent over her disastrous professional and personal life, rushes off to a shopping mall to bask in the adoration of her die-hard fans. In the same movie, Kevin Kline plays an aging playboy who feeds his fragile ego by attempting to seduce young starlets. These two caricatures are a perfect combination of Trump's character traits.

From Gloria Swanson's faded diva in Sunset Boulevard ("I'm ready for my close-up, Mr. DeMille") to Jack Nicholson's aging Lothario in Something's Gotta Give, the insecure and narcissistic character has been a staple of Hollywood movies for decades. Thankfully, those disturbing stereotypes are disappearing in Hollywood, only to pop up again on cable news and social media in the form of Donald Trump's desperate quest for attention.

The political pundits scratch their heads over his self-destructive torrent of insults, tirades and pointless stunts. But for anyone who has spent much time in Hollywood, it all makes perfect sense. While Trump would like to be elected (although he sometimes looks like the dog who caught the car and doesn't know what to do with it), that is clearly not what drives him psychologically.

Like the vain and deluded Gloria Swanson, he is desperate for attention and clings to his celebrity like a drowning man to a life preserver. With his dyed hair, his sexist swagger and his infinite paranoia about being the top dog, he is a character right out of movie lore. The most talented screenwriter could hardly conjure up a more perfect Hollywood stereotype than Donald Trump. In our celebrity culture, we are finally getting a taste of an unadulterated celebrity personality thrust into the political landscape - and it's not a pretty picture.