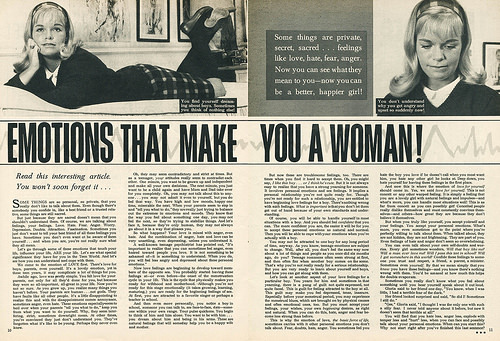 Is there any woman alive today who has not had her behavior blamed on hormones at some time in her life?

Alleging that hormones have caused you to think, speak or behave is a certain way is the equivalent of saying that there is no legitimate reason for how you feel.

Well, women have hormones and so do men. It's part of who we are and there is nothing we can do about it. But hormones should not be used as an excuse for a person to dismiss another person's feelings or viewpoints. My guess is that most women would feel the same way about being called "fat pigs" or "slobs" at any time of the month.

So women everywhere have this to say to you, Donald Trump: Don't point to hormones as a justification for dismissing our viewpoints. Don't claim hormones make our feelings and beliefs unimportant. Don't dismiss our remarks because we have hormones.

Photo credit: Emotions that make you a woman via photopin (license)