A middle-aged woman ran down the street after a young guy driving a pick-up truck in my town today. I looked on as she fumed, yelling at him to "watch where you're driving."

I don't know what immediately preceded this encounter, but I do know she ran until the man stopped -- he made no effort to avoid talking to her -- at which point she continued to scream, among other things, "I only speak English!"

The man spoke back to her in measured tones -- in English -- and did in fact have a Spanish accent. I don't know what he did to incur her wrath, but I do know I was startled by her anti-Hispanic invective.

This was Princeton, NJ, as open-minded a place as I've ever been, and yes, a sanctuary city (or town).

Her rant made me think of Donald Trump. (I have no reason to believe this young man is an undocumented immigrant, but that's not the point.) 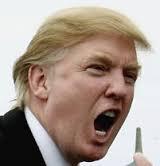 If Donald can find like-minded haters here, he might indeed have touched a bigger nerve than I ever thought possible.

It also made me wonder if Donald knows anyone who has come to the United States illegally. Given his crowd and his contempt for anyone he regards as beneath him, which is nearly everyone, I doubt he does.

I do know "illegals." Several. Maybe it's the luck of the draw, but the undocumented folks I know work harder than many if not most of the American-born people I know, and at jobs Donald has made clear he views with derision if not disgust.

Donald is Mitt Romney on dumbed-down steroids. Everything that gushes from his mouth without benefit of having passed near his brain reminds me of Mitt's $10,000 debate bet offer to Rick Perry.

Donald is simply giving semi-human form to the worst of what many people perceive as The Rich -- he just doesn't give a damn about anyone but those who are like him.

It is pointless to debate whether he should even be running for President (he shouldn't), or if he is poisoning the Republican brand (of course), or if he should be held accountable for his staggering stupidity (he won't). It barely merits discussion that Donald is the new incarnation of those who blamed the Irish and the Italians and the Jews for the nation's troubles a hundred years ago. I leave that to those who make a living analyzing politics.

It is worth mentioning again that crime statistics about undocumenteds contradict Donald, but then facts in general contradict him.

I do know that Donald knows absolutely nothing about the actual lives of those who cross the border into the USA without benefit of papers. 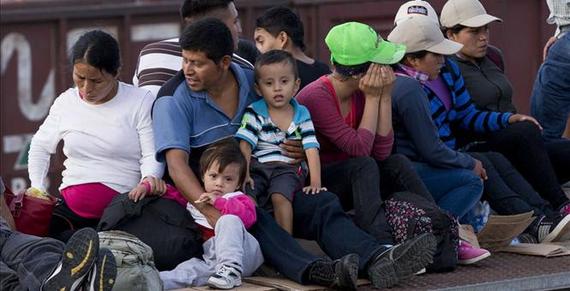 He knows nothing about living in poverty and fear and dealing with the consequences of cowardly rhetoric from arrogant entitled sons of real estate moguls who believe that hate can be effective when aimed at the least powerful among us.

He knows nothing about hard work in the sense that most people who were raised without privilege define hard work. Not hard work negotiating billion dollar deals.

Hard work waking up at 5 a.m. to work construction jobs until 7 p.m. and hoping the cash you were promised would actually be paid -- which it often isn't. These are the "illegals" I know.

Their lives are hard. They live in fear. They mostly lead law-abiding existences the same way "legals" do.

Have Donald trade places with them for a month, a week, a day. Perhaps some empathy would emerge. Perhaps not.

I am a highly educated white man who has and still does struggle financially, and yet I have never understood the workings of psyches that blame those who are different looking or sounding for the world's troubles.

Or who run down a quiet street screaming at a man about his Spanish accent.

Are these haters afraid? That the world they knew and desperately cling to has changed forever? Yup. It has.

Or like Donald, do they just not know anyone who has -- with deference to Jeb Bush's accurate assessment -- risked his or her life to come to America to try to make things better for themselves and their families.

Don't tell me about the oft-deported man who killed the woman in San Francisco unless you're prepared to talk about Adam Lanza and the 20 children in Newtown, or James Holmes and the dozens killed and injured in Aurora, or Dylan Roof and Charleston, or others who commit crimes and were born here and are here, well, legally.

Donald has never known and will never know anyone who does back-breaking work 12 hours a day, six days a week to try to lead a better life. And even if he did, he would find reasons to metaphorically spit on them.

Just ask the panting, ranting woman chasing the man in the pick-up truck.