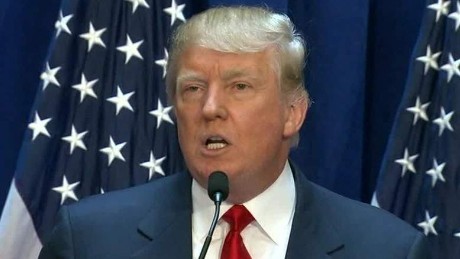 Frankly it is not only Trump but a segment of Republican supporters which is the real problem. What Trump is doing right now is simply saying which this segment wants to hear. Trump himself may not even believe what he is saying. His utterances are not out of any "sincere" convictions, but based on shrewd Machiavellian calculations. Yes, in doing so he is reinforcing the extreme beliefs of that segment but he is not causing them.

In fact his every racist and xenophobic statement is calculated to get more media coverage (though ironically he calls media "scum") and more support from that segment. The very fact that after every controversial statement his poll numbers have increased is a testimony to this fact.

In fact, this segment is a much bigger problem than Trump because even if he loses, this segment will not change its way of looking at things. What will happen is that some other candidate will simply mimic his strategy as it has become clear that this entails rich rewards.

And rewards are actually rich. There is a logical reason behind it. According to the polls, Trump's supporters are right now 25% to 35% of the Republican voters. If they stick with him, they will ensure him a few victories in the primaries. Once, he starts winning even those who do not support him will start backing him because his viability will increase. Remember at some point, you have to back someone and if Trump starts looking viable than even moderate Republicans will start backing him.

If he gets the nomination, then there is a significant chance that he may become President. Many political pundits have been trying to dismiss the possibility but frankly this may actually materialize. It is simple: If you are a Republican then in a general election you are likely to vote for Trump rather than crossing over and voting for Hillary.

Moreover, let us not forget that many also think that he is the right person for the economy. So if you are a moderate Republican or even an independent who is really concerned about economy, then in case of a Hillary versus Trump contest, you will back the latter and simply overlook his other negative traits. In fact you may think that his racism was just a ploy to get vote and he will actually not act according to his rhetoric.

Moreover, some Republicans and Independents may actually dislike his style or the extent of his rhetoric but still agree with the core points. For example, many may disagree that Mexicans are rapists or all Muslims are terrorists, but still think that immigration is a serious problem which needs to be addressed. And after the latest San Bernardino shooting, there is that heightened security fear. Due to these factors, they will overlook the negative aspects and vote for him on his perceived ability to steer the economy and deal with immigration and terrorism.

Therefore if Trump wins the nomination, there is indeed a significant chance that he may win the Presidential election. Yes, this would negate the famous median voter theory which has so far explained American politics very well. According to that theory, in a majority voting system, the two mainstream parties at the time of the election try to pander to what is known as "Median Voter" who generally is in the middle of ideological scale. They do so because by only moving towards the middle of the ideological spectrum can they gain more votes. This median voter theorem has so far successfully explained as to why USA does not elect radical or extremist Presidents.

This may change because Trump may hold on to his core support while convincing other Republicans and independents, that he is the right guy for the economy. His personal appeal ( after all he is a celebrity) will also lure some voters, to give him a chance. They too may simply overlook his hateful rhetoric. Moreover in this atmosphere of heightened fear, the median voter may itself have moved towards right and willing to compromise on some aspects.

So this is how a person like Trump who actually may not be really popular among larger segment can still win.

Trump understands this very well. All he needs to do right now is to ensure that he retains the support of his supporters. If he retains it, at one point majority of the Republicans will automatically rally behind him.

Many Republicans despite not supporting him right now may end up supporting him because they would think that this is all election rhetoric and if elected, Trump will not go to extreme but still deal effectively with terrorism and immigration.

Here is a big problem. Every leader has to satisfy his core group of supporters. Once Trump becomes the President, he will have to satisfy his core supporters who are behind him mainly because of his extreme views about a host of issues. Eventually the Republicans and Independents may end up getting more than what they bargained for.

Right now Trump may be doing all this out of mere calculations but this may end up in serious consequences. Worse, even if he gets defeated, he has nevertheless introduced a dangerous strain in USA's political fabric by destroying the entire concept of political correctness.

Many actually like it. After all they think that USA's culture of political correctness is causing politicians and media to avoid saying things in an honest manner. They think that politicians become afraid of "offending" the minorities and end up appeasing them. To them political correctness is a shameful thing and prevents much needed tough solutions.

Trump has not caused the bigotry as I have already argued above. It was already there in a narrow band of Republicans. What he has done it to mainstream it and that inhibition which politicians use to feel before saying something outrageous, will no longer be there in future. To be politically correct is now "unglamorous" and cowardly. If this way of thinking becomes entrenched, then in future politicians will increasingly indulge in outright bigotry.

Trump has made bigotry publicly acceptable and unfortunately even admirable and all in the name of "honesty" and the need for saying things as they are. And in doing so, he is destroying the very soul of USA.