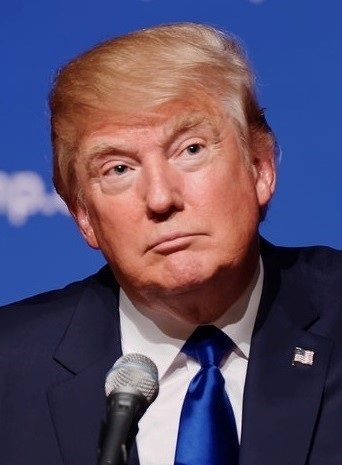 It pains me to say it, but today Donald Trump was right.

Anyone who follows my work knows me as a fervent member of the liberty movement. I have come out against Donald Trump in my writing and my radio show since, based on what I have seen so far, I regard him as an egotistical authoritarian. Last month, I even spoke specifically against the absurdity of libertarians' supporting him when I was a keynote speaker at a state Libertarian Party annual conference.

But today, I have to take his side on a critical matter of fact against a swathe of libertarians who think they know all about our monetary system but are wrong -- and wrong in a way that hinders their ability to fight for economic liberty.

Indeed, if my libertarian friends understood why (I never thought I'd write this) Trump spoke the truth today, not only would they be better able to make their case for our nation's freedom, but also they might be slower to accuse others of economic illiteracy, also favoring their cause.

In a nutshell, here's what Trump said: the U.S. (government) can never default because it prints its own money.

Before I go on, it is critical to note that Trump wasn't saying our monetary system should work this way: he was saying that, as a matter of fact, it does. In other words, his statement was descriptive and not prescriptive.

If I can help my libertarian friends learn a thing this year, I'd like it to be the following.

Many libertarians and free-market conservatives correctly point out the critical importance of free markets in which free people can vote with their money for the production of some goods or services over others. They note that in a free market, parties to a trade both benefit since each gets what he or she regards as the greater value in the exchange (usually a product vs. money) -- or else the trade would not occur. (E.g. the shop-keeper would rather have the money while the buyer would rather have the groceries.) Market pricing that is based on supply and demand ensures that resources flow to sectors that most need them. Central planners, on the other hand, can never know the proper price of things and so mis-allocate resources, causing potentially huge problems later.

Libertarians emphasize the dangers of manipulation by central bankers and governments who can cause bad investments to be made by altering the amount and price of money in the economy. Cheap or excess money leads to credit bubbles, asset inflation (e.g. housing in the USA up to 2007) and mal-investments. In such cases, artificial booms occur, and they are inevitably followed by a bust that as the economy re-balances itself and those who made unproductive investments are bankrupted. At least, they should be if a disruptive political class would stop making everything worse by trying to redistribute wealth to make everything better.

Much of the Austrian economic cannon, to which libertarians subscribe, concerns the dangers of fiat money, whose value is eroded over time by a government and central bank that print it with the purpose of transferring to the Treasury the buying power of the citizenry. Similarly, in the fractional reserve system, private banks create money when they create debt, and by charging interest when they do so, ensure that, over time, real wealth is transferred from productive workers to financiers who produce nothing directly. This too reduces our freedom and prosperity.

However, Austrian theory was developed when the world was on a gold standard, and so it is unsurprising that while it is invaluable in understanding markets and the dangers of an unconstrained fiat monetary system, it is incomplete as a description of the monetary system that we actually have today.

Perhaps the most fascinating attempt at such a description is Modern Monetary Theory (MMT), which emphasizes the following counter-intuitive facts about our current system.

Just as the government creates money when it spends, it destroys money when it is paid. It never really "has" or "does not have" any money. The only meaning of government debt, then, is the sum total of all government spending minus revenues since the currency "began". Perhaps we should call it "cumulative created currency" (ccc) instead?

Since the government is not revenue-constrained, it never needs to "borrow money from China" or anyone else. If a foreign entity has U.S. dollars, that can only be because of a trade surplus. If that entity does not use those dollars to buy assets, then it only has two options: it can keep the dollars in cash in a bank (which in turn has an account at the Fed) and gain no interest, or it can park them in a dollar instrument (government bonds) that pays some interest. The operation merely involves reducing the "creditor's" cash account at the Fed (column g in a spreadsheet, let's say) and then increasing the "creditor's" treasury account at the Fed (column h in the spreadsheet) by the same amount. None of this gives China the power over the USA that a creditor has over a debtor in the normal sense... so say the MMTers.

MMT thus explains that our traditional fears of insolvency and a bond crisis simply make no sense in our strange world of fiat currency with a monopolistic issuer. We get misled when we try to understand our current system using words that are hangovers from a completely different (and much more natural and intuitive) system (which existed before 1971, when Nixon took the USA, and thereby the world, off the gold standard). If we insist on using these words still, we must change their meanings dramatically.

A skeptical reader might ask, "If this is true, why does the government bother with taxes at all, since they don't need the money." The MMTers have a startling answer. First, by requiring the citizenry to pay taxes in its currency, the government ensures that its currency circulates and that it can buy what it needs (since people need the government's currency to avoid prison for non-payment of taxes). Second, by setting the tax levels, the government can drain money from the economy to balance the rate at which it spends money into the economy and thereby prevent excessive inflation.

This all seems like an Alice-in-Wonderland world of money, because that is what it is.

Many of the (admittedly few) libertarians who engage MMT are horrified by it, since the complete lack of operational constraints seems at first blush to argue against the need for governmental fiscal discipline, and for the idea that governmental financial shenanigans have none of the consequences that they would have if money had real value. But of course, just because something can be done does not mean that it should be done; that the system that allows it to be done should be tolerated, or that such a system won't have huge consequences that today we cannot predict.

But libertarians should not reject MMT for what it seems to imply. Rather, the nature of the world that the MMT describes is precisely what makes Austrian and libertarian economic thinking more important than ever before. Libertarians must engage MMT as a descriptive paradigm, even when the policy positions preferred by many of its advocates horrify them. Otherwise, they simply do not fully understand what exactly is most dangerously wrong with the system they are trying to change.

Just because the government cannot be insolvent; just because it does not technically need to balance any books, and just because government deficit (in the aggregate) equals non-government surplus, it is NOT the case that a system in which all this is true is fair, sustainable or conducive to our well-being.

First of all, the system described by MMT, while real, is unconstitutional. Second, (as MMT admits), the supply of money in the private sector remains critically important as inflation is the monster that must not be unleashed (and the Austrians and libertarians know all about that). Third, everyone other than the government still use fiat money in creating the economic dynamics of the nation in a way that the Austrians best understand. And fourth, and perhaps most importantly, government cannot merely spend money into the private sector without choosing where and how to spend it. And any such choice removes spending power from private citizens and redistributes it just as surely as in the days when the likes of Hayek and von Mises, two of the greatest thinkers in Austrian economics, were doing their best work. Put simply, while MMT offers extraordinary insights into aggregates, no economic decision ever affects only an aggregate.

For all these reasons, libertarians should be most concerned with discovering the mechanisms by which this Alice-in-Wonderland system might be destructive of the economic rights and well-being of private economic actors, while being prepared for the fact that these mechanisms may go beyond their current understanding because of realities of today's monetary system that not only did not apply when Hayek and von Mises were writing, but in some cases, could scarcely have been imagined.

If MMT is even close to correct in its description of the world, then the government is completely unconstrained -- without even the very weak discipline that would be imposed by the need to raise spending money if not by tax then by borrowing, and by the creation of money as credit by banks in a fractional reserve system.

MMT is relatively new, and some view it as antithetical to the world that libertarians would like to build. But the two paradigms in part describe different aspects of our economic reality: synthesizing them by applying the tools of one to the most important observations of the other could provide something that we desperately need, and so rarely find -- genuinely new insight.

I'll bet, though, that any such synthesis and all future evidence will vindicate Hayek again and again in at least one point:

The curious task of economics is to demonstrate to men how little they really know about what they imagine they can design.

As for Donald Trump: he has garnered huge support by "telling it like it is" - or at least "telling it as he sees it".

The fact that the government is utterly financially unconstrained in just the way Trump noted today is the hugest, most subversive Truth he has told to date. And of all the truths he has ever told, it is the one that libertarians should be proclaiming the loudest.