While I've felt like I'm trapped in an extended episode of "Punked" or an "SNL" skit gone too far, Donald Trump is well on his way to being the GOP candidate, and it's all your fault!

Trump has insulted Hispanics, woman, blacks, old people, (did he insult dogs?) spewing insult after insult, dividing his very own party, showing America exactly who he is, yet, repeatedly, he continues to win delegates in each state and he could quite possibly win the presidency because you didn't pay attention in history class and you don't know how any of this works. 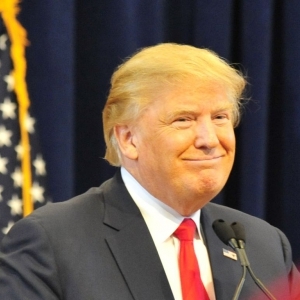 (https://www.donaldjtrump.com)
Don't misunderstand me, I'm not into politics. I don't know the ins and outs but I know the basics. Do you? Probably not, so I'm here to give you a refresher course on 9th or 10th grade social studies.

The process starts with the primary elections and caucuses and then on to nominating conventions, where each party selects a nominee to band behind. The president is not elected by YOU the people. The president is elected by the Electoral College and the senate. Let me explain: In 1787, the delegates decided on a system of indirect election of the president. Congress, the Electoral College is made up of delegates from each state. These are the people who elect the president, NOT the popular vote. (Remember in 2000 when Bush beat Gore who had actually won the popular vote?) Congress is made up of two equal chambers: The U.S. Senate and the U.S. House of Representatives. Guess who they are elected by? Yup, you guessed it. YOU!

There are elections held for every office. We, the people, hold the power in these elections; the ones that no one really pays any attention to for the candidates for smaller offices who eventually become the people in higher offices. Then when it's time to vote for president, everyone is running to the polls and confused why the person with the popular vote didn't win.

Understand the power you have and the importance of going out to vote for the representatives in your area who are in alignment with your political needs. Take interest in your borough presidents and district attorneys, the people who are beginning their career in politics, if you learn their stances on the issues that are important to you, you can ensure that the right people get into office and when it comes time for presidential elections you won't be wondering how a person with absolutely no concern for the little people, who wants the poor people to pay the most taxes while he holds onto his money, is winning.

So, while Hilary is pandering to the blacks with her "hot sauce" and dancing meringue with the Hispanics and while Trump is dividing the country with his racist rhetoric, remember that EVERY election is important and you must do your research on the candidates for the offices that you don't deem significant because THESE are the people who will make up your government and eventually choose your president.