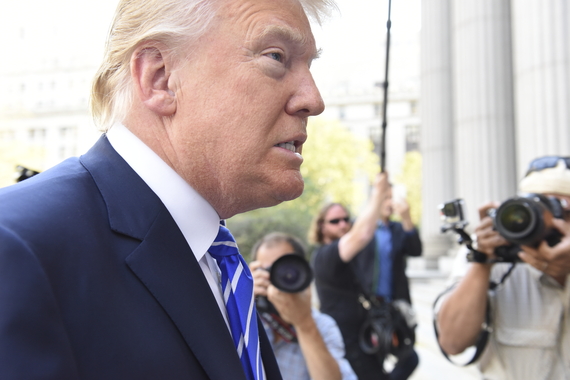 "I would borrow, knowing that if the economy crashed, you could make a deal," Republican presidential candidate Donald Trump told CNBC recently. Further, he suggested that the US "can buy back [debt] at discounts. You can do things with discounts."

The pundits went nuts, crying out in numerous articles that a US default on its trillions in debt would wreck the nation's economy and quickly lead to a worldwide financial crisis. Others used it as a chance to roll out a standard criticism of Trump: that he's bankrupted his own companies in the past, and would do the same with the federal government if elected to run it.

Trump responded that his comments were misconstrued. "People said I want to go and buy debt and default on debt. I mean, these people are crazy," he was quoted in the Washington Times. "But let me just tell you: If there's a chance to buy back debt at a discount - in other words, interest rates go up and the bonds go down and you can buy debt - that's what I'm talking about."

Despite the brouhaha, the initial interpretation of Trump's comments might be wisest: if the United States were to reach a crisis point - such as a potential sharp increase in the interest rates attached to the nation's debt - defaulting might be the best choice we have.

In a crisis, where debt suddenly became completely unmanageable, cutting spending or services wouldn't and couldn't happen fast enough. Raising taxes is an even slower process. Look how hard it is to do either, even in times when we aren't in crisis.

That leaves another alternative, one that's as true for the nation as it is for individual families all across the nation: at a time of financial crisis, the clearest path forward is often a debt-cleansing default.

Our nation has struggled with its debt burden for generations, and it only gets worse as time goes by and obligations grow. More people need vital support, more highways need paving, more weather emergencies erupt, more existing debt needs to be paid. At this point, the United States debt is over $19.2 trillion, an amount which our country has little hope of ever repaying in full.

No matter how Trump was interpreted, he did not say that he would turn and walk away from debt. Rather, if a crisis hit, a nation or a family crushed by unaffordable debt could use default as a strategy to encourage lenders to negotiate.

When debt is being paid as agreed - whether a nation's trillions in sovereign debt or a family's thousands in credit card debt - lenders have no impetus to negotiate terms that might be easier on the borrower. Why should they bother? They're getting paid.

But when they stop getting their money, they notice. They know that collecting something is better than nothing, so eventually, after trying to collect in full, they often become willing to deal.

Trump knows that: he's used the default strategy successfully in business, pushing companies into bankruptcy in order to come out with a more affordable route forward. "I have used the laws of this country, the [bankruptcy] chapter laws, to do a great job for my company, for myself, for my employees, for my family," he said during the first Republican presidential debate on August 6.

Governments have done the same: Argentina defaulted on $82 billion in 2001 and 93% of the bondholders settled for discounts of around 65%. Puerto Rico appears to be at the outset of executing a similar strategy.

Individuals with unaffordable debt can do the same. When a crisis hits, when the bills have become simply too big to pay, families can do like Trump, Argentina, Puerto Rico and legions of others. Put their families first and default. It's the first step in a debt cleanse, a process of settling unaffordable debts at significant discounts.

There is a downside: a default will typically ruin credit, making financing in the future difficult - if not impossible - to obtain. However, that can be a good thing, as living debt free can be rewarding. Just ask the leaders of the British Virgin Islands, Brunei, Palau, Liechtenstein, and Macao: these are the only five countries which are debt free.

Whoever becomes our next President should consider defaulting as the first step to make America debt free - and great again.